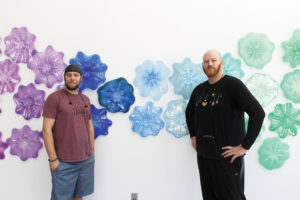 Jesse Ahrendsen (left) and Jesse Bogenrief stand next to glass they created for the entrance to Mainframe Studios.

Jesse Bogenrief works with 2,300-degree temps every day, but the occasional bead of sweat trickling down his brow doesnât deter his passion for creating beauty.

Bogenrief is a glass blower. He opened JJ Gaffers Studio at Mainframes Studios in 2017 but started his business 17 years ago in Spencer.

Bogenrief grew up around glass. Both his parents were accomplished stained glass artists and he figured heâd follow in their footsteps. However, a devastating car accident left him with a broken back, and he couldnât physically stand still or bend over to perform tedious glass work.

âGlass blowing is the only art form that has movement,â he says. âIt drove me nuts at first.â

He took a glass-blowing class in three days, which was a âbrutal process.â After creating just nine pieces, he opened up his own business.

His studio at Mainframe is named after his mother as a way to honor her. JJ stands for Jeannieâs Jewels, although most people think itâs named after him.

âShe was my inspiration,â he says. âShe was passionate about glass work.â

His mom battled cancer, and she lamented about how depressing the waiting room was. He once had the opportunity to create a glass piece in the cancer centerâs waiting room.

âIt has a tranquil feel to it, and hopefully it cheers people up,â he says.

Bogenriefâs favorite work is creating custom glass projects. He recently made 19 wedding unity candle vases, and they were shipped to 17 different states.

âI like making pieces that have an emotional connection,â he says. âIt means more to someone receiving it.â

About 65 percent of his glass creations are custom ordered, including a chandelier for a client in Hawaii.

Studio days are also spent providing glass demonstrations to the spectators, including this writer. Bogenrief carefully explained where NOT to put my hands on the metal rod. As we dipped it into the 2,300-degree oven of melted glass, I rotated it and walked to the metal stand to roll the hot glass in the colored glass beads. The âsprinklesâ coated the glass and then were taken to a 2,100-degree furnace. The shaping took place with a wet Wall Street Journal, long tongs added swirls of color, and a shaping ladle smoothed the edges. The blowing takes place with a short puff of air to add dimension to the piece. Finally, it is put into a cooling box of 955 degrees.

Bogenrief answers questions from the crowd seated on the bleachers nearby, including one pertaining to his favorite part of glass blowing.

âItâs the ability to see a piece go from a little glob of nothing and see a color bloom 30 minutes later,â he reflects. âMy favorite is coloring and manipulating the glass.â

Heâs honed his artistry, noting glass blowers are rare in the Midwest.

âItâs an art form of doing thousands of pieces to actually know what youâre doing,â he says. âI credit that to coming from a glass family.â ♦