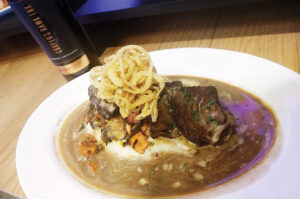 The Cooperâs Hawk is a marvelous-looking bird that preys on robins and chipmunks and such. It was not named for James Fenimore Cooper, who created the character Hawkeye in âThe Last of the Mohicans.â Do not go to Cooperâs Hawk Winery & Restaurant expecting to find taxidermic hawks, which are not PC, or Iowa Hawkeye paraphernalia. The closest thing to either you will find is a feather in the restaurantâs logo.

What you will discover is a brilliant business plan that would probably have many imitators if it wasnât so damn much work to implement. Cooperâs Hawk is four separate entities under one roof â a tasting room/gift store, a party room, a bar and a handsome, leather and wood restaurant. Altogether they take up 11,300 square feet (commercial realtors and restaurateurs are doing the math now), and they complement one another, thanks to two other parts of the business plan â the Chicago chainâs winery and each restaurantâs wine club.

Here is where the hard work comes in. The company makes their own wines, without growing grapes, and only sells their own private label in the restaurants, the tasting room/gift shops, and, most importantly, in their wine clubs. âThe best wine is the one you personally like,â says Tom Koenigsberg, the chief marketing officer for the company. Tastings and suggestive descriptions help members discover the wine they like.

Cooperâs Hawk makes half their revenue on their wine club, which has an amazing 600,000 members and is growing fast. The chain began in suburban Chicago in 2005, the brain child of Tim McEnery who had returned to Chicago from Napa. He brought a lot of Napa with him. Many Napa vineyards, even some famous ones, buy other growersâ grapes to make their wines. Lodi, in fact, only came into its own as a winemaking appellation in the last two decades after growing grapes for mostly Napa winemakers before then.

All Cooperâs Hawk wines are made in Illinois with worldly grapes. The wine club and its membership makes everything work. Cooperâs Hawk has built 45 restaurants in 11 states since its founding, all without any public financing. âEach place brings in enough cash to finance the next place,â Koenigsberg explained.

Man canât live on wine alone, so the restaurant works to pair food with wine, rather than the other way around. Wine suggestions are rife on the menu. I tried a few of the restaurantâs most popular dishes. Brussels sprouts ($17) were described as the best-selling appetizer. They were crisped and matched with sweet Thai chilies, Sriracha and sesame aioli, cashew nuts and fresh mint. Drunken shrimp ($19) wrapped in bacon had succumbed to tequila lime butter and were served with freshly made guacamole. Pork belly ($17) was served with scallions, sesame seeds, cilantro, radish, avocado, sour cream and hard tortillas. The belly itself is a northern Iowa recipe. Pot stickers, lettuce wraps, egg rolls, sashimi, cheese boards and flatbreads completed the app menu in the $14-$24 range.

I also tried recommended entrÃ©es. A pan-roasted mahi mahi in Thai style curry ($32) stood out for not being overcooked. Its coconut milk sauce included edamame beans, tomatoes, green beans and gingery rice. Braised short ribs ($36) were served in decadent gravy on mashed potatoes with roasted root vegetables and crispy onion strings. It was my star of the evening and was generous enough to provide three meals.

At lunch, I tried an excellent prime rib sandwich ($23). The restaurant makes everything in their kitchen, and since they serve no prime rib for dinner, a freshly roasted prime rib, not leftovers, is used for sandwiches. Thatâs quite a commitment. It came with a choice of sides.

Bottom line â this is good food, maybe a little pricey, but the wine club is the hook that makes things work. ♦