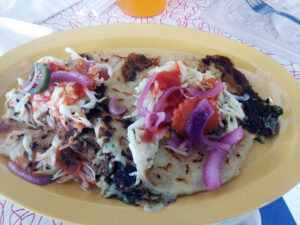 Itâs hard as ever to open a new restaurant these days with labor shortages, high-interest loans, and customers stressed by inflation. Yet people keep doing it, and doing it well. In this month of thanksgivings, we salute daring new places that made the local food scene much better.

There is another reason we took this direction. Three days before Bar Nico even opened last month, someone with no profile, nor photo and with the unlikely name of AVA Smith posted this about the cafÃ© on Google. âAbsolutely awful, terrible service, overpriced Mexican, boring!â If AVA Smith exists, it was only possible for him/her to have sampled the barâs service, food and drinks completely without expense, out of the generosity of the owners. Haters got to hate.

Since all other reviews were positive, I ventured down to this new cafÃ© in East Village. I found a top-notch cafe, beautifully remodeled, featuring top-shelf mezcals, tequilas and whiskeys with very creative recipes for cocktails. For instance: an Oaxacan Fashioned mixed Vida mezcal reposado with Ancho Reyes Chile liqueur, chocolate bitters and agave nectar; Sangre de Vida combined Vida mezcal with brandy, Aperol, ginger lemon liqueur and brown sugar; Borderlands mixed vodka with fig syrup, Cardamaro Amaro, sherry and lemon. Those drinks were $10-$14 and were fabulous examples of our cityâs new bar culture.

La Cuscatleca South is now open in a marvelous space the used to be the AIB cafeteria. Like their parent store on the eastside, they are all-in for Honduran/Salvadoran cuisine. (Cuscatleca means Honduran or Salvadoran but only applies to inanimate things like food or art, not people.) 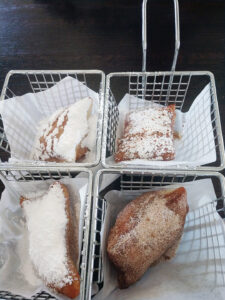 The cafÃ© is closed on Sundays to offer its space for rentals. Itâs a very happy spot with 1950s diner dÃ©cor indoors and a huge wrap-around patio with great views of downtown.

There is a spot in downtown Earlham that two of Des Moinesâ best restaurateurs tried to convert into small town cafes. Both gave up, but COVID had a lot to do with their misses. Now, itâs found new life as a bakery and coffee house that compares well to the best of Des Moines, Iowa City or Ames. 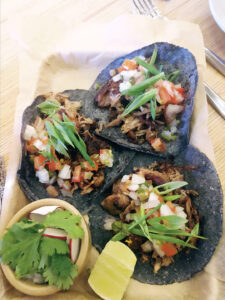 Beans & Beignets is the epitome of what is called âa hidden gem.â Pastries are ridiculously pleasant surprises, with four kinds of beignets that can transport one to New Orleans. I tried them all and prefer the lemon. The coffee beans that shares naming rights with them are roasted in Winterset by Pammel Park.

Soups are Trellis-level good. Sandwiches and salads are just fine. Desserts, especially pies, are worth the drive from Des Moines. An ice cream bar and dessert menu open at 11 a.m. ♦