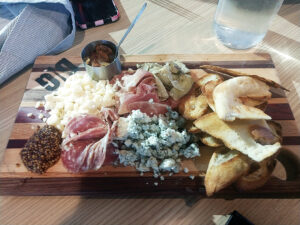 All Iowa cheese and charcuterie

Restaurants on the outskirts of town have been development pathfinders. When Eddie Websterâs opened in 1970, it was miles of cornfields away from the houses. It introduced central Iowa to flagons of wine, Alaskan ice cream cocktails, and a menu of steaks and lobster, no pasta or chicken. Eddie built it and the people, houses and malls came. Sadly, Webster crashed his snowmobile through thin ice and died at age 53. His restaurants, all built in the middle of cornfields, did not survive him.

Similarly, Paul Trostel opened his Greenbriar amid cornfields on the edge of Johnston and Alice Nizzi operated Aliceâs Spaghetti Land in the cornfields outside Waukee. Nizziâs place lasted 50 years, and her name is honored with parks, housing developments and highways. When the Waukee city council tried to rename Aliceâs Road, protestors shouted them down. 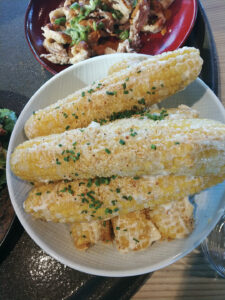 Destination Grille is not really on the outskirts of town. There are housing projects as well as cornfields around it, but, as its name implies, it will draw people who have never been there before. It is unlike any other restaurant in the metro, built by the owners from the ground up. Tall windows are so impressive that one owner couldnât guess how much they cost. It is a two-story place with rooms for board meetings and private parties. Unlike most two-story restaurants, it has an elevator. The patio includes Vegas class cabanas with overstuffed furniture and fire pits. The backlit bar ranks with Irinaâs and AJâs in wow factor. Furniture includes high tops, low tops and handsome booths.

Attention to detail extends to the kitchen. A âsteakhouse broiler ovenâ can cook steaks at 1,650 degrees F. It also has a cast iron grill on top for stunning sears. The kitchen also has four different ice machines because different drinks require different sizes of cube. One machine even impresses the restaurantâs brand on the cubes. That is definitely a Vegas touch.

All beef is wagyu, the legendary breed that produces Kobe. Even chili, wieners and pastrami are made with wagyu. There is a Saturday and Monday specials menu with big bargains on pizza, chili dogs, beer and vodka. There is an international menu that offers rotating ethnic cuisines. Korean was up in September with a boneless version of short ribs. Weekends feature prime rib.

Medium crusted pizza were cheese forward with five and six cheese blends dominating sauce. They were blistered but not charred at all. Seared scallops were as good as they get, served on pickled watermelon radishes with citrus butter and cucumber. Lobster rolls were exquisitely fresh tasting. The restaurant offers live baked lobsters. Chicken strips were made with thighs and sandwiches with breasts. Cheese and charcuterie employed Iowa legends from La Quercia, Milton Creamery and Maytag. Fabulous fries were tossed with truffle oil and Parmesan and served with truffle mayo.

Marinated local sweet corn was deep fried. Seared ahi was served in lettuce wraps. Mojito shrimp were nicely paired with corn salsa. Wings were smoked and fried, a good idea. Three of my favorite things were cheese stuffed hash browns, lobster corn chowder and Caesar dressing. One of the chefs admitted he had learned those recipes working at Des Moines Golf and Country Club, 801 Steak & Chop House and Flemingâs.

Not up to the rest of the menu: Calamari were tough to chew, even baby whole ones; desserts were limited to just two choices; a bar well stocked with top-shelf boozes had zero after-dinner liqueurs, not even Irish cream.