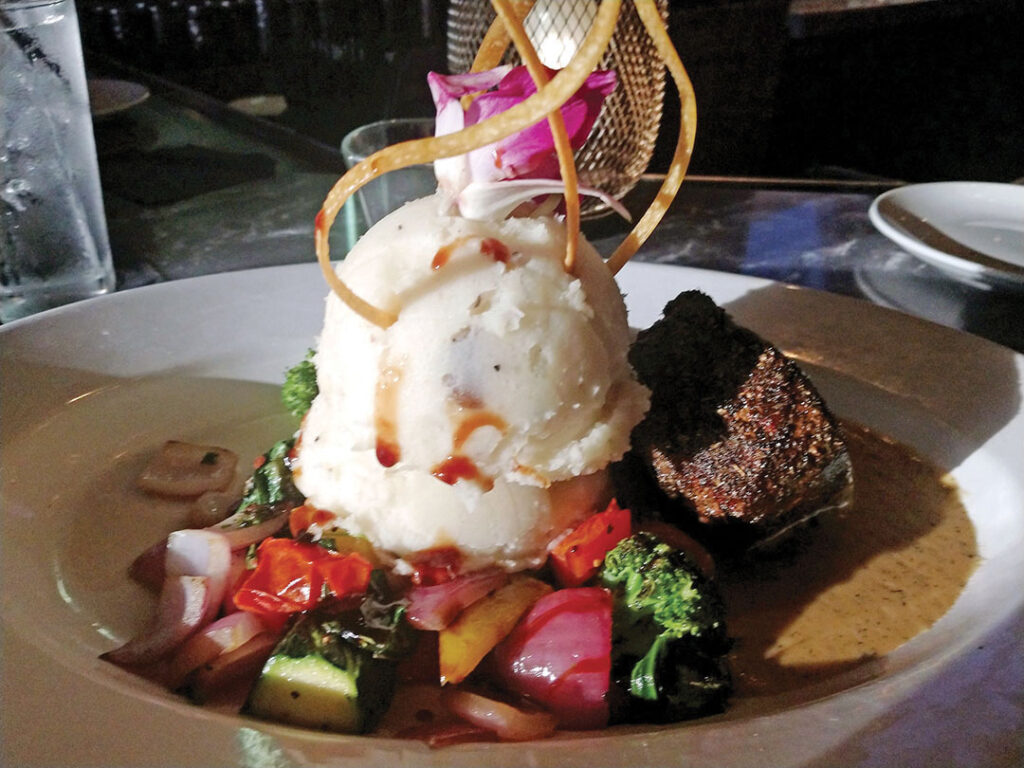 When other local restaurants expand, they donât duplicate much. St Kildaâs has three outlets currently, and all are quite different. The newest, in Clive, closes at 4 p.m. Thatâs radically different from the St. Kildaâs Surf & Turf that was ended by COVID. When Jerry Talerico revived his Sam & Gabeâs concept, he called it Tally Ho to Go, and he placed it in Merle Hay Mallâs food court.

The most distinctive new version of an established restaurant is Irinaâs Steak & Seafood. When the owners opened on Hickman, they took over a troubled venue that had been a frequent target of Urbandale police. Mold damage to the walls was so bad they had to tear the walls down to the studs. That revealed hidden caches of drugs and cash.

The new Irinaâs Steak & Seafood moved into a former Bonefish. That is a Bloominâ Brands chain of high-end restaurants with all the trappings of elegance one finds at sister restaurants like Carrabbaâs, Flemingâs and Aussie Grill. To that they added wood, marble, linen curtains, leather and an upscale menu that features 60-day dry-aged prime steaks and South American seafood. The ager is built in the wall with a glass door so one can watch future steaks mature. Romantic lighting, high- and low-top seating, a piano soundtrack and Irinaâs flair for dramatic presentations make this place an instant rival to Flemingâs.

The menu is not too different from the other Irinaâs. Specialties like wagyu beef stroganoff, squid ink fettucine, goat cheese salad dressings, pork shank ossobuco, Boursin stuffed mushrooms, lamb antichuco in tzatziki, or sea bass sudado with shrimp escabeche and saffron rice are here. So are the decadent burgers and the steak de Burgo that won CITYVIEWâs ultimate de Burgo challenge. A few things did not move to West Glen â fried chicken, duck frites, lasagna, banana foster cake, carrot cake, mussels in chardonnay. Chicken Kiev that was earthshakingly good is gone from both places now. Butter is relieved.

New stuff includes an expanded choice of prime steaks, both wet- and dry-aged â some as long as 60 days. Bernâs Steakhouse in Tampa used to be the only one in America with 60-day dry-aged prime steaks, according to Vogue food editor Jeff Steingarten. In a practice begun locally by Paul and Troy Trostel, any steak can be ordered with special treatments â de Burgo, Bearnaise, gunpowder crust, Maytag blue cheese, peppercorn, horseradish crust or Cognac sauce.

Some dishes here are new to Irinaâs. Singapore lobster rolls on challah, tender short rib ravioli, miso halibut in sake/butter, black bean grouper with lobster criolla, and the sweetest tasting scallops I ever tried with truffle risotto and crab sauce. In a tribute to Bonefish, the new Irinaâs makes bang shrimp, the chainâs most famous thing. Irinaâs version uses a tamarind sauce instead of a mayo and Sriracha sauce. Irinaâs was served on skewers stuck in lemon half and a bed of cabbage.

The new Irinaâs bar specializes in cocktails and mules and does not have vodka flights like the Hickman branch. Parking is easy. Bottom line â this is an elegant new edition to West Glen dining, a perfect weekend, private party and special occasions splurge. ♦