The Reinhardt Room is for showing off 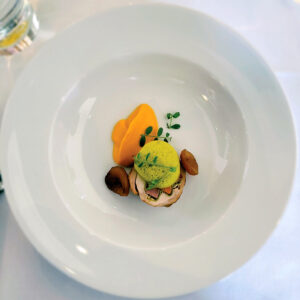 Four decades ago, the wise men of Des Moines invited architect and prophet Mario Gandelsonas of Princeton to town. Gandelsonas presented a vision of a future Des Moines that predicted the allure of East Village, a developed right bank of the Des Moines River and the western gateway. As soon as it looked clearly like the Pappajohn Sculpture Park was going to become a magnificent asset to the city, while cementing the prophecy of the western gateway, new wise folk began scrambling for real estate best equipped to take advantage. Kum & Go won that scramble and added a building as marvelous as any sculpture or park.

The Reinhardt Room (RR) has now won the exacta, taking best advantage of both the sculpture park and the Renzo Piano Kum & Go headquarters. The RR sits on the south side of Locust directly in front of Jaime Plensaâs âNomad,â the parkâs star attraction. Directly north of âNomadâ sits the Kum & Go building. There is no better view in town. RR is designed for special events â evenings that outlive the daylight and conclude after Pianoâs genius for lighting is in its full glory. The facility can host 100 in a cocktail mode and 80 seated guests for dinner.

It has its own banquet kitchen and shares staff with Django, including executive chef Derek Eidson. When not booked for private events, RR hosts special dinners, tastings, and beer and wine dinners. We attended a recent beer dinner that featured Funk Factory Guezeria (FFG), a Madison company that began 10 years ago in owner Eric Funkâs basement. The brewery makes mostly lambics â beers that are fermented by exposure to wild yeasts rather than the tamer brewerâs yeasts. My fun table included a construction engineer, an accountant, a professional drag queen, a political consultant, a wine steward and a nurse. 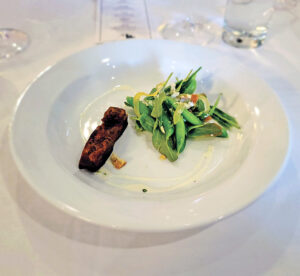 Eidson created seven plates to complement six lambics. We started with an oishi oyster with bosbes mignonette, cucumber and fennel. The oishi is low in salinity, and the berry flavor of the bosbes mignonette thrived with it. Next came a potato tot with caviar, crÃ¨me fraiche and chives. This is something Eidson likes to do, mixing a common thing with a fancy one.

Next up was a star of the night â rabbit roulade with puree of carrot, a pickled apricot and fresh ramps. That included all six flavors with an underutilized meat. It was paired with a similarly complex cervino, a very sour beer that had been blended with fruity white sangria.

Then came the superstar of the night. Lamb belly was crisped and served with peas, sorrel, preserved lemon, a buttermilk and chives dressing, and a crouton. Why donât more restaurants serve lamb bacon? Again, all flavors paired this time with a twice-fermented beer blended with wine and seasoned with orange peels.

The next course featured roasted cauliflower paired with Mimolette fondue, leek ash and crunchy pine nuts. Mimolette is a French take on Edam and complemented rather than dominated the cauliflower. It was paired with a lambic that had been exposed three times to Wisconsin honey. 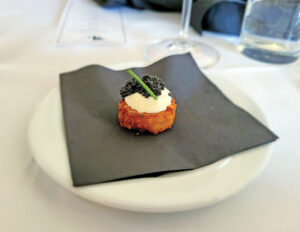 The main course of the evening was some halibut in mussel sauce with navy beans, chard and ramp oil. As almost always happens in a banquet setting, the fish was well done and needed the sauce and oil. This was paired with Funkâs specialty called Four Winters as it takes three years to age in barrels before being blended with juice of unripened fruit and conditioned another year in bottles.

Dessert featured a magnificent rhubarb shortbread tart, with candied Marcona almonds and vanilla sabayon (custard). It was paired with a lambic blended with juice of Door County cherries.

FFG beers are available at The Cheese Shop and soon at other outlets. They cost $12 to $25 for a wine bottle-sized serving. ♦