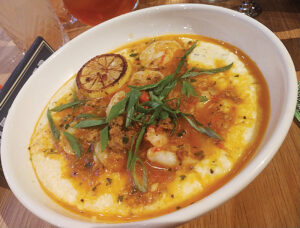 When Machine Shed was merely conceptual, Mike Whalen visited other places he felt would be competitors. After seeing Cracker Barrel, he told his designers that he wanted to be Cracker Barrel on steroids. Everything at Machine Shed is supersized â silverware, steak knives, booths, plates, serving sizes, tables, signs, etc. Tupelo Honey, a fast-growing chain from Asheville, North Carolina, is in the same cuisine genre as those other two chains â traditional American comfort food and family friendly.

Its differences are many. Tupelo Honey does not seek out interstate exits for locales. It likes downtown spots like the new one in Des Moines â its 19th store in 11 states. It does not have monster menus. In Des Moines, it has two-page menus for lunch/dinner, brunch, happy hour, kids, beer and cocktails. It serves only two desserts. Its gift store fits in an armoire rather than 800 square feet of retail complexity. Its dÃ©cor forsakes Southern stereotypes like barnwood, checkerboard tablecloths, overalls, moonshine and deliberate misspellings for a more modern, urban take on the South. Design elements include elegant chandeliers, site-specific wallpaper and local art.

Like Cracker Barrel, it specializes in Southern food. The main differences are in two details â elevated ingredients and scratch preparations. Fried chicken, a specialty, is brined for 18 hours, fried crisp and dusted with bee pollen. Table honey is tupelo honey, a rare honey that grows only on tupelo trees that are pretty much unique to the Florida panhandle. It has the highest glucose to sucrose ratio of all honeys. That means it does not granulate and does not make users crash for a sucrose high. It also allows suave flavors to overcome the sweetness. The restaurant buys half the tupelo honey in the nation.

Scrambled eggs were as fluffy as any I ever tried. Executive Chef Eric Grabynowicz said the secret is lots of butter, but he also said that poached eggs are made sous vide. One version of chicken and waffles features Asheville hot chicken, which was not as spicy as Nashville hot, and a not-too-crispy waffle stuffed with macaroni and cheese. It was topped with buttermilk garlic dressing and pickles and served without syrup.  Grabynowicz said that the omission of syrup was the most hotly debated decision made about the menu. Eggs Benedict were served on biscuits, not muffins, and treated to three versions â one with pork shoulder cooked in duck fat, another with smoked ham and a third with smashed avocado. All were served with pickled onions and cracklings. Bourbon glazed meat loaf was very sweet.

If fried chicken is not the star here, it is the house recipe for wild Gulf shrimp with grits served with Creole sauce, peppers, chorizo and goat cheese grits. Grits are made with a rare corn product almost never seen outside Carolina. That can also be ordered with linguine. Smothered chicken was made with thighs. It was not served with mashed potatoes, maybe for the first ever time in Iowa.

The best salad was called lemon garden party and featured arugula and baby greens with cucumbers, radishes, feta and almonds in a divine lemon and white balsamic dressing. The two desserts were a chocolate pecan pie and a magnificent banana cream pudding. Leave room. There is a full bar with unique cocktails. ♦