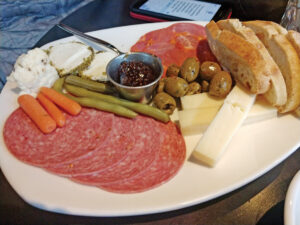 Anna Dolce is a wonderful addition to the West Glen area. It is not a national franchise, which is a rare thing in this neighborhood. It is a collaboration between two of Des Moinesâ most creative groups of restaurateur/bar innovators: Dark Side of the Spoon â which has 10 different restaurants, some with multiple venues, in the metro, Omaha and Sioux City â and the Gusto group, which also founded El Guapo and also partnered with Dark Side of the Spoon on Breakfast Club.

Dark Side presents itself as being in the business of fun, story making and badass times. Ana Dolce is all those things. On the restaurantâs website are photos of every dish on the menu, really good photos that show you exactly what to expect. Next, the staff will offer your table a breadbasket â a lost gesture in most of Des Moines now. The restaurant has the most aggressive happy hour in the area. Every day from 3-5:30 p.m., all glasses of house wine and all bottles of wine are half price. All appetizers and pizza are $10. Shared pitchers of cocktails are $20 and yield five or six drinks. Those choices, though, are all quite sweet.

From the appetizer list, mussels were excellent in white wine cream with spicy soppressata. Stuffed green peppers combined beef and pork in old fashioned Des Moines style with marinara and mozzarella. Potato gnocchi buco used an all-pork ragu with Parmesan. Vegetarian dining partners raved about charred cauliflower with smoked Romesco  and crispy Brussels sprouts with truffle aioli and Parmesan. The app star for me was the stuffed mushroom caps with herb ricotta and fennel sausage in a fabulous jus. A charcuterie board was so generous that two of us took half of it home.

Five salads covered everything from supper club and wedges to raclettes and arugula. Pizza were rather thick crusted. The Margherita was the most traditional with both Parmesan and fresh mozzarella. Among pasta dishes, a couple non-red sauce versions stood out â beef Stroganoff, which is making a comeback in Des Moines, with wild mushrooms in thick cream and a Bolognese with both pork and beef in pappardelle. Lasagna was interesting, too, with both pork and beef and three cheeses but minus the huge layering that often defines the dish.

Because the appetizers are so tempting at happy hour prices, I have not dared try the ribeye because it is a 20-ounce cut. Itâs the only dish on the menu served with wild mushroom risotto, though. I enjoyed a good osso buco of pork with broccolini and creamy polenta.

Desserts include a tiramisu and a layered chocolate cake with hazelnut cream and pralines. The star to me, though, is limoncello cheesecake with an Amaretto crust and a Bourbon cherry on top. The restaurant makes its own limoncello and serves a glass for just $3.

The restaurant holds two pieces of art that help make the place fun. One is a photo and one is a painting, but both are huge depictions of women devouring pasta with gusto. There are a couple TVs in the bar, none in the dining room. Music is often from the 1960s through the early 1980s. There are high tops, booths and tables with lots of free parking and handicapped parking. ♦