The dining room is run by Andrew Wilson, who came to Des Moines from Charlie Palmerâs Dry Creek Kitchen.

My first glimpse of Proudfoot & Bird was a personal downer. Having been a big fan of Django when it was in the Hotel Fort Des Moines, it was a shock to see that most of its marvelous trappings had not been retained. The unique floor, the ceiling and the bar were all gone. Some of them ironically were the works of Proudfoot and Bird, the original architects of the hotel. Things started getting much better after that first disappointment. 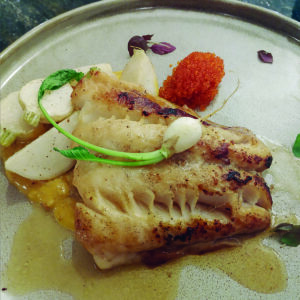 The new design works. It reminded me of an old New Yorker cartoon in which people in one booth ask the next booth, âCan you settle a bet for us â is this the Paris Hilton or the Berlin Hilton?â Yes the new restaurant looks like a lot of other hotel restaurants. Hilton Curio likes it that way. The new ceiling and walls probably contribute to the fabulous acoustics. This is the quietest restaurant in Des Moines and excellent for conversation.

The restaurant will serve three meals a day soon. Hilton Curio likes it that way. In short order, a coffee shop will open for breakfast and as a secret entrance to a speakeasy in the basement. That space, with nooks and crannies that are furnished with smart and eclectic style, will surely be the new hot spot for downtown drinkers. Breakfast can be taken in the marvelous new lobby, complete with traveler art and comfortable furniture.

Dinner is the star of the dining room run by Andrew Wilson, who came to Des Moines from Charlie Palmerâs Dry Creek Kitchen, a gem of a place in restaurant and wine-crazed Healdsburg, California. Wilson has also worked in some of Tennesseeâs and Georgiaâs best cafÃ©s. The kitchen in Des Moines is dominated by its open wood-burning grills where fruit woods provide a seductive aroma.

The menus are sensibly short. There are just eight choices for breakfast. Bacon and eggs and French toast share the menu with California things like smoked chicken sweet potato hash with smoked jalapeno hollandaise, truffle quinoa with eggs and kale, shakshuka (baked eggs with stewed tomatoes, chili spices and Feta), acai yogurt with berries, chia and hemp, steel cut oats with apricots and pecans, and avocado toast with salmon.

The luxurious black cod is a star on the dinner menu. I have previously only seen it on menus in the best Asian restaurants. It is not a cod; its real name is sablefish and is mostly fished off the Oregon and Washington coasts and sold to Japanese and Chinese buyers. It is a fabulous dish served here with miso, turnips and butter with sea urchin eggs. It was sold out on a subsequent visit, so I tried sea bass with romesco sauce, fennel and mint. Steaks, half chickens, pork chops and cauliflower steaks are more traditional offerings. Eggplant is Wilsonâs choice for the best side, but it has been hard to find lately. A three-way kohlrabi dish and mushrooms with smoked onion soubise and preserved lemon were both treats.

Olive oil cake with mascarpone and fruit, and a panna cota with date syrup and pistachios starred among desserts. Three-course Christmas dinners will be served for $85, and reservations are suggested. In fact, due to staff shortages, the restaurant does not fully book, making reservations a good idea any time. ♦