When Jay Wang took over the lease on what had always been Trostelâs Dish, he announced it would be his first non-Asian restaurant. 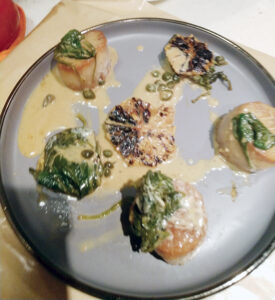 The word âauthenticâ irks me, mainly because it is usually misused. We live in a FedEx world today where the available ingredients of all cuisines are 24 hours away. Chefs learn everything these days. Some years the Iowa Culinary Institute has as many foreign students as home-grown ones. The era of air freight is designed for fusion cuisine more than any faithful adherence to styles of old fashioned national cooking. Even the Texas chain Arbyâs now advertises itself as a fusion place, with venerable actor Ving Rhames doing the narration.

Jay Wang and friends (he has recruited 20 some to Des Moines from the coasts) run several wasabi restaurants that amalgamate Chinese, Thai and American dishes with their Japanese base. They are marvelous restaurants. When Wang took over the lease on what had always been Trostelâs Dish, he announced it would be his first non-Asian restaurant. There were grumblings about a Japanese-trained Chinese guy from New York taking on that challenge. Hey, George Formaro has a standout example of Italian, French, Mexican, delicatessen/diner restaurants, and a burger chain, too. Why should a good restaurateur limit himself?

The results at Aura are superb. Dish was as handsome as almost any restaurant in the metro, and its footprint, with a long bar surrounded by raised booths and floor tables, is unchanged. The Wasabis have a good reputation for upscale cocktails and happy hour bargains, and that is true at Aura. The old fashioned has been making a revival the last decade, and Aura presents three styles â Longbranch with St. Germaine, a smoked version with hickory and cherry smoked Knob Creek, and a peach version with Woodford Reserve, Peachtree (a peach schnapps liqueur) and luxardo cherries â the worldâs original maraschinos. There is also an Elite martini made with Stoli Elite and dolin vermouth, which is neither sweet nor dry, and a Passion Fruit margarita.

The kitchen is equally picky about using the best ingredients. Those might change seasonally, which is what Iowa cuisine does at its best. A few months ago, I ordered a pickle bowl with six interesting, pickled vegetables and a scallop dish served with edamame and spring pea puree. More recently, the pickle bowl was off the menu, and the scallops were served with smoked caper cream, seared oranges and spinach. Both scallop dishes were fabulous.

Fried cauliflower was cooked with gochujang, which is chili paste made with sticky rice and fermented soy beans, plus sesame seeds and green onions. Frites, both truffled and not, were more typical of Des Moinesâ better restaurants. So were drunken mussels, shrimp cocktails, oysters on the shell, hummus and Brussels sprouts.

Crisp crusted lavashes were offered with mostly white sauces, including a fig and chicken with garlic and honey. Large plates to share included: a carnitas board with pork, salsa verde, Cotija cheese, and tortillas; a full pound of roasted tri tip (most popular BBQ meat in northern California), wild mushrooms, bordelaise and roasted garlic; and a falafel board with hummus and vegetables, tzatziki and pita.