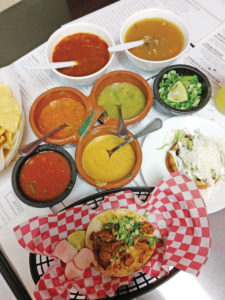 A friend of mine, who teaches law in France every summer, says the success of Subway in that country baffles her. She asked her French friends âWhy?â They told her they loved âthe American concept of personal choice.â Subway invented an assembly line system in which the diner makes all the choices about ingredients. That Subway template has been copied by other sub chains, as well as by burrito joints like Chipotle and Pancheros, and pizza spots like Blaze. Thereâs not much difference between sandwiches at Subway, Jimmy Johnâs, Potbelly, Jersey Mikeâs and Firehouse.

Capriottiâs is more creative and better because of it. Kristy Lorber, who owns the new store in Clive with her husband, Blake, told us that they loved the sandwiches when they lived in Las Vegas, the current headquarters for the Delaware-founded chain. The biggest difference between their store and the Subway template stores is the daily scratch work is done in the local kitchens, not in some corporate kitchen 1,500 miles away.

Turkey here is cooked each night after the store closes. Whole Butterball birds are baked, pulled off the bone and mixed together, dark and white meat alike. Lorber says that a little bit of skin gets in the mix, too. This is such an improvement over the usual mysterious dried out pressed breasts. I canât eat a turkey sandwich anywhere else now. Capriottiâs also makes its own turkey dressing and cranberry sauce for its âBobbie.â Some people call that a Thanksgiving dinner in a hoagie bun.

Roast beef is cooked on the premises, too. Itâs made from wagyu beef loins, not rounds. Pastrami is made from shoulders. Brisket is disappearing from the scene because barbecues and Arbyâs buy so much of it. Shoulders are superior to the rounds that are more common. Philly steak sandwiches are made from rounds, as they are in Philly. Chicken cheese steaks, excellent Italian classics, and meatball sandwiches complete the menu. Lorber says the roast beef and the meatball sandwiches are probably her best sellers. Even cole slaw is made fresh daily.

Tacos La Familia has similarly brought a more inventive style of taqueria to the metro. Like sub shops, local taquerias mostly resemble each other with dominant MichoacÃ¡n and Jalisco influences. La Familia is reminiscent of the food in the great mercados of Mexico City. Sauces are made with guajillos more than with anchos. Thick homemade tortillas are made daily in the shapes of open pies and sandals.

Some of these sandwiches are offered âdrunken,â meaning soaked in chile salsa and fried. Barbacoa (roasted meat) is made with lamb. Birria (stew) is made with beef in an ancho-based sauce. Also, the consommÃ© de borrego is made with lamb and is a soup full of as many wondrous flavors as any in town. Not that the birria soup isnât, too.

Tacos with two small corn tortillas, tortas, burritos, pambazos (sandwiches smothered in guajillo sauce), huaraches (a documented Mexico City invention), sopes and quesadillas can all be ordered with a choice of birria, barbacoa, beef cheeks, beef tongue, pastor (marinated pork), tripe, fish, seafood and vegetarian. There are no carnitas, chiles rellenos, tamales, nor flans. There are five styles of breakfast, carne asadas, steak dinners and augachiles (shrimp in lime juice with appropriate sides). Two different shrimp dinners and one whole fried mojarra dinner are served all day. That is a tropical fish from the Gulf of Mexico that is a cousin to tilapia. Birria pizzadilla is a family invention.