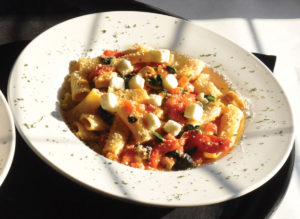 I drove aimlessly around town during the power outages, mainly because my car was my only place with air conditioning. Restaurants were closing all over town â three Burger Kings, the S.E. 14th Street Popeyes and the large McDonaldâs on University at Sixth all appeared closed while neighbors had power. I knew we would lose many places from the coronavirus response, but I didnât expect large corporate losses would be big. After all, they have deep pockets and are designed for mostly drive-through service.

In this environment, it is great to see a new independent thriving. That is the case with Santinoâs, an Italian place with one other restaurant location, in Chicagoâs Alton burb. It occupies space that was originally Maverick, built by legendary Iowa restaurateur Miller Reams. Most recently it was Mama Laconaâs. It features state-of-the-art windows that keep heat from warming wine bottles inside them. Carrara marble bar and table tops are stunning. Yet the space and the entire shopping center have not thrived since being built just before the real estate collapse of 2008. It is surrounded by cornfields and a behemoth truck stop.

But Santinoâs is a destination hit. Open seven days a week, it has lunch, dinner and Sunday brunch menus. Veal is not really a Des Moines thing, but it used to be. Santinoâs features four veal dishes on the lunch menu and seven for dinner. I tried three, all marvelously tender and well adorned. My favorite is the veal principessa, served only for lunch. It is delivered in a buttery white wine sauce with sundried tomatoes, eggplant, cheese, prosciutto and mushrooms. A generous portion was served with soup or salad and bread for $11. Veal Sorrentino was served in a sherry sauce with eggplant, sliced tomatoes and cheese. Both these dishes were plated on linguini.

The dinner menu has veal dishes for $16. From that offering, I tried veal piccata. That classic was served, as it always should be, in a sauce of lemony butter, white wine and capers. I tried one of two lasagna offerings. It was made with scratch-made pasta, three cheeses and rich tomato sauce. It is $10 at lunch and $12 for dinner. Fried chicken was impressively breaded and tender inside. Itâs also served frequently on the brunch buffet. There are 10 other chicken dishes on the dinner menu and five on the lunch ticket. 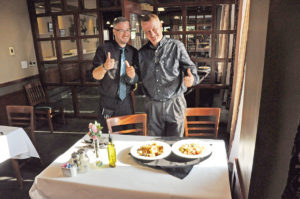 I tried two pasta dishes, and both impressed. Penne in pink vodka sauce included larger-than-usual penne and a creamy tomato and basil sauce. The dish that others touted the most was the lobster ravioli. Pasta is stuffed with lobster and served in a creamy Tuscan sauce with shrimp and scallops. Oddly itâs only on the lunch menu, for $12. A meatball sandwich did not disappoint. Dessert menus were changing daily and, at deadline time, a new pizza menu was about ready for rollout.

The parking lot is big enough to accommodate any sized crowd. The restaurant has seating in the bar with high tops, the main dining room with low tops and a party room set up in different styles. Tables have cloth tablecloths covered with paper sheets. Beer, wine and cocktails are served. Large, three-olive bloody marys and mimosas are featured at brunch for $3.

In the 1950s, my parents liked to drive north through several cornfields to dine on veal at Vicâs Tally Ho and Silhouette. Veal is back, and, once again, itâs served past cornfields.

Mel Harper left us for another world at age 91. He owned 790 Vets Club and the legendary Empire Room in the Court Avenue District. He later operated Robertâs Lounge and Melâs Bar & Grill in West Des Moines. Mel had the cred to bring Dizzy Gillespie to Des Moines and the ken to promote local talent like Irene Miles. ♦