Patience on the edge 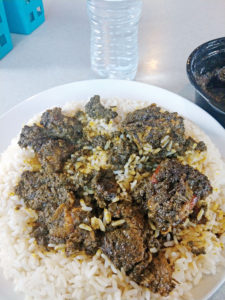 The Euclid-Douglas corridor was long considered to be on the edge of town, then Des Moines expanded beyond the borders of its city limits. Now the corridor remains a border space between the tried-and-true restaurants in the ilk of the woe begone Knox CafÃ© and the still thriving Iowa Beef Steakhouse, and ethnic and immigrant experiences like the divine Pho All Seasons and the original Michoacan-Jalisco (M-J) style restaurants that have captured Des Moines.

Including addresses within a block, the corridor runs from the nostalgic Eastside Eddieâs on one end to El Rodeo. In the midsection are classics like Chuckâs, Chicago Speakeasy and Tasty Tacos. It passes trend setters such as Wasabi Chi, India Star and Flix Brewhouse. In the rearview mirror, one can glimpse the wind-grieved ghosts of legends like The Silhouette, Vicâs Tally Ho, Gianniâs, Helen & Patâs, The Husker, Pollos Rotizados, Dowieâs and Garciaâs of Scottsdale. The Bishops Cafeteria in Merle Hay Mall for many years served more meals than any restaurant in Iowa. The only cafÃ© ever here devoted exclusively to Philly steak sandwiches sat near the only bowling alley with a volleyball court and a full-service cafÃ©.

The corridor has always supplied a glimpse of the future and a grip on traditions like the Highland Park Country Club, which should be on everyoneâs bucket list of lunch dives in town. Chicago Speakeasy provides, at least until press time in the latest virus panic, the last ice-chilled salad bar in town. East Side Eddies still features old-fashioned classics like chicken and noodles. Pho All Seasons goes further into cosmopolitanism than any Vietnamese cafÃ© in town.

The corridor today reflects the latest local trends. Two excellent immigrant-centric markets â Saigon and Golden Land â fill their parking lots. The Safari African cafÃ© is closed now next to Golden Land. A sign in the window suggests it has moved to Franklin Avenue and renamed itself Amira Somalia restaurant, which features Ethiopian, Turkish and American coffee drinks, plus injera (spongy teff flour bread) breakfasts. The new African cafÃ© on the corridor is a West African style place called Patience. It inhabits a property that had previously been home to an excellent soul food cafÃ©, a pan African restaurant and a Bosnian-Greek joint. All served great food but were short lived.

Patience, now 3 years old, might have what it takes to endure at this venue.

Unlike the long-lived Taste of Africa and Amira, this African cafÃ© features Central and West African foods. That means no injera but lots of rice and fufu, described by servers as cassava flour and plantains pounded with water. It is served here as a soup with fish, turkey, chicken and beef. Itâs as spicy as most East African dishes around town, which means it has a kick.

My favorite dish is called cassava leaf, which means a spinach-like green is cooked with palm oil and served with chicken, turkey and beef in a spicy sauce with a huge serving of rice. There is also a dish simply called palm oil with the same proteins. Fried okra, steak and turborgue (similar with beans dominant) are also featured. Palavo (similar to biryani) and fried fish dishes complete the menu.

The soft drink menu includes Vimto, a drink that is sold on tap in some Scottish and English pubs. Itâs called a tonic and mixes carbonation with corn syrup, black currants and raspberries, plus secret herbs. Itâs worth a try and a good complement to the spicy entrees. Patience does not provide much ambience. Try their carryout.

Bottom line: Douglas/Euclid is still the cutting board edge of Des Moines. ♦