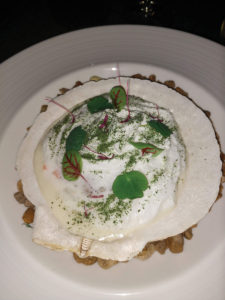 Stuffed clams at R/I are one of many menu items at the new Windsor Heights eatery.

University Avenue is chock full of happy eating surprises. Many of those are hidden away in real estate that entices the initiated rather than the drive-by diner. This is the street of the precisely named Fast Mart & Chesterâs Chicken & Moneygram. A customer once threatened to take my camera until I was able to show him that I was only photographing fried chicken, a product that is the favorite fried chicken of many locals. Tacqueria Mariannaâs has been my favorite Mexican joint since La Rosa closed, but I always warn first-timers to be careful of ruts in the parking lot. The superb Andrah style cafÃ© Namaste started in space shared with a grocery store. Pho 515, my favorite Vietnamese cafÃ©, still shares a space with C Fresh Market. So does the top flight deli Taste of Italy.

Between Now or Later on the east end of the metro and Taste of Italy in Clive, University is mostly known for such unexpected delights rather than fine-dining superstars. Since the conversion of the avenue into a more bicycle-friendly street began, one upgraded place and one new one are threatening to transform the image of the street. R/I occupies hallowed restaurant ground. It succeeds three legendary cafÃ©s â Anjoâs, Sage and Baru 66 â all of which were considered the best in town by several folks. (Sage partner John Rossâ Chicago cafÃ© The Bristol was named among that cityâs top 10 by the daily paper there.)

R/I, short for Rockport, Massachusetts/Iowa is not a departure from the cutting edge that previous owners and chefs brought to Windsor Heights. Jacob Demars sharpened his knives in the kitchen of a Michelin starred restaurant. He presents a seasonal menu of dishes from coastal New England and Iowa. On a recent visit, I was able to sample eight plates out of 13 offered, plus two desserts. Among the starters, a stuffed Cape Ann (Rockport and Gloucester) clam starred, served in its large shell with clam chowder and fontina espuma. Other delights included: carrot salad, smoked in maple leaves with maple syrup vinaigrette, greens and toasted hazelnuts; cider poached beets with apples compressed in beet juice and caraway mousse; and a sweet corn souffle with sweet corn puree and lime bubbles.

Service was high end. Napkins were folded into the shape of flowers. Amuse bouche surprised with dessert rather than savory flavors. Plating was artistic. Portions were not large. One dining companion said she stopped at Tasty Taco on her way home.

Twenty blocks east, New Hong Kong has transformed itself. Completely remodeled with stylish new furniture, it has removed its lunch buffet and upgraded the kitchen to include more big city Chinese options rarely found in the metro. Jellyfish salad, the real thing, was served with scallions and cucumbers, for a rare contrast of textures. Bitter melon was sautÃ©ed and served with shredded pork. Eggplant was braised with minced pork. Several proteins were served with top-notch black bean sauce. There are Hunan and Szechuan menus and noodle dishes of rice and wheat flours.

Shrimp and squid were fried and served salt-and-pepper style. Duck was presented in four different fashions. There is a hot and a mild menu for both ramen and udon. For groups of four or more, several tables accommodate Chinese hot pots, a fashion in the 1990s that has slipped away. Two kinds of broth are served with eight kinds of raw food. ♦