Stars of the appetizer menu included the pata de negro Iberico, the leg of the most coveted pig in the world for charcuterie. 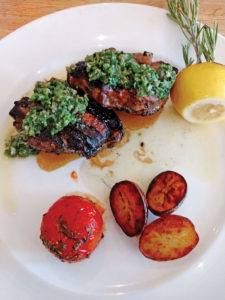 Bistro Nomad sits downtown with a view of Jaume Plensaâs sculpture Nomade. It certainly lives up to its name. The cafÃ© is owned by an Ames pair who opened Plus 39 before deciding to concentrate on their restaurant in Ames, also called Plus 39. That restaurant evolved from a grandmotherâs tagliatelle recipe in Vecchiano Pisa and from two restaurants in Sardinia and the Italian Alps. David Baruthio, the Strasbourg native who ran Baru 66, Blue Tomato, Prime Steak and Seafood, the Des Moines Art Center CafÃ©, and Al Punto in Des Moines partnered with them to open Bistro Nomad. Then he moved back to Europe and opened one restaurant in France and another in Switzerland.

Now the cafÃ© is run by Marc Navailles, a native of San Sebastian who had run kitchens in Spain, France, Argentina and Florida, to name a few. The restaurant is still gorgeous, but the kitchen and service have been upgraded. Thatâs an important thing because the cafÃ© had taken some brutal beatings on social media sites. Navailles says he keeps printouts of some of them in his pocket to remind him to never revisit such problems.

Sandwiches included gyros, shawarma, salmon BLTs, tuna salad and burgers. Salads included tabouli and Nicoise, as well as more familiar things. Pasta employed linguini with garden fresh treats. Entrees and paella (for two or more) also crossed over from the dinner menu. They are stars here and included a black paella made with squid ink and clams, prawns, octopi, calamari and mussels. A Valencian paella included the same seafood minus the ink, plus chicken and chorizo in a saffron flavored pan of Dacsa Valenciana, the short grain, nutty rice that is the sine qua non of paella. There is also an Aragon style paella with no seafood, just pork, chicken, sausage and vegetables.

Moroccan royal couscous was a similarly decadent dish made with lamb, chicken, merguez, and harissa broth. The best thing I tasted were lamb chops that were covered with chimichurri sauce (kind of a parsley pesto) and served with roasted tomatoes and potatoes. Those were a weekly special that I pray makes the full-time autumn menu, which should be in place by press time. Branzino is a Mediterranean bass that has a flavor unlike what we usually see labeled sea bass here. Itâs also a much smaller fish. Nomad served it whole with lemon, potatoes, tomato, and sea salt. Octopus with prawns was served fire roasted with aioli and rice.

Stars of the appetizer menu included the pata de negro Iberico, the leg of the most coveted pig in the world for charcuterie. Other charcuterie and cheese boards featured more European things â burrata, goat cheese mousse, hummus and gazpacho. My favorite dessert was a rich, thrice-layered tres leches.