Fusion and Vino 209 are fun 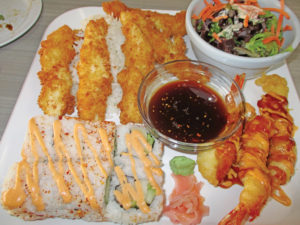 A bento box of snapper katsu at Fusion Bistro.

Godfatherâs Pizza founder Willy Thiesen once told us that for a new restaurant to be successful, it first must be fun in its own special way. That seems like a simple lesson, yet itâs rarely at the top of the planning list for new restaurants not named Chucky Cheese or Dave & Busterâs. It seems like that is changing in Des Moines.

Terra Grill and BAH Brazilian Steakhouse are definitely fun, with gauchos running about cutting freshly grilled meats from the spit at tableside. Teddy Maroonâs promised to bring a post high school spirit to its new digs on Ingersoll. The Range mixes simulated golf, from the worldâs greatest courses, with prime beef.

Two rather new places are trying to have fun in subtler, but no less effective ways. Vino 209 in Historic Valley Junction has constructed a sophisticated vibe that complements its venerable venue, much like many parts of East Village. Old bricks and wood and new designs, particularly the bar, lend the 50-seater a comfy and intimate feel. On my visits, I have noticed that women appreciate this much more than men, at least if counting heads is your form of research. The number can run as high as 20 to one and has always been double on my visits.

Beer and coffeehouse coffees are offered here, but make no mistake â this is a wine bar. About 50 wines share a wine list that impressed me and a couple friends who know lots more about wine than I. These are $20 to $65 bottles with the vast majority falling less than $40. All were also sold by the glass, and appellations were well chosen. Prices seemed like bargains compared to downtown.

A very small kitchen run by Andrew Phelps knew what it was, too â a wine bar kitchen. Soups, salads and sandwiches were sold, I think mostly for lunch. Small plates, like salmon rillettes, white bean hummus and truffled popcorn were popular in evening hours. But more favored by the diners were the many cheese boards and cheese specialties like panzanella, burrata, blooming cheese and baked brie. Meat and cheese boards, with La Quercia meats featured, seemed even more popular. Good musicians played on Tuesdays, and movable window-doors promised to lend an indoor out experience in warm weather when Valley Junction rocks.

Also in eastern West Des Moines, Fusion Bistro has moved into a strip mall where BW Burgers had previously been. Fusion offered a purely fun menu that features sushi, pho, soba, curry, gyoza, dumplings and tempura as well as wings, burgers and sushi tacos (wrapped in seaweed rather than tortillas). Most dishes, including bargain priced bento boxes at lunch, featured a choice of fries or shrimp tempura, plus a choice of soup or salad, and a choice of any house sushi roll, plus your entrÃ©e and rice. My red snapper katsu delivered six pieces of fish, three shrimp plus salad, rice and a white tuna roll for $8.50.

Nigiri servings were generously sized. Burgers, in the $9.50 to $10.50 range, were 6 to 8 ounces and included fries or shrimp and pineapple slaw. Pho was made in a shin bone stock that had been roasted before simmered, with whole briskets included. The restaurant produces 10 homemade sauces including chipotle ghost pepper, smoked eel, and hot pineapple besides more familiar ones.

The place promises to be even more fun when its liquor license is approved. It still has several large screen TVs to create a very different kind of sports bar. ♦