The ambiance is collegiate chic. 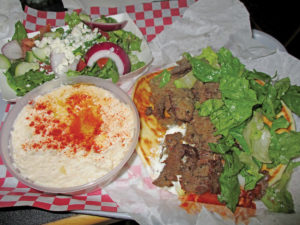 Gyros with Greek salad and baba ganoush at Gazaliâs

Gazaliâs is a secret trove. They have been around since the 1980s when they began in Valley West Mall and have been in their current locale on 25th Street in Dogtown since 2003, yet I am amazed how few people know about them. I think they are often written off as a college joint.

MJ, the owner, of Lebanese family origins, came to Des Moines from Los Angeles where he cooked for Emirates Airlines, amongst other places. His brother owns Open Sesame in East Village. Serving much of the same foods, they are quite different cafÃ©s. Gazaliâs is more casual and less expensive for starters. The recipes are passed down from MJâs mother and insist on fresh ingredients.

The ambiance is collegiate chic, a phrase coined by a professor from Drake who eats here a few times a week. I think that is supposed to mean that Gazaliâs is a sophisticated place for its neighborhood, affordable but far off the beaten path. The front room features four portraits of donkeys, or are they mules? They are named for Lebanese/Greek dishes.

One orders at the counter and serves oneâs own drinks. Orders are delivered to your table. Some evenings, belly dancing breaks out on the floor. You donât find that at Jimmy Johnâs.

The menu is familiar to people who love Lebanese/Greek cuisines. The execution is not; itâs superior. First of all, gyros, the sine qua non of the cuisine, is made with lamb, not beef or some strange mix of beef and lamb. Itâs also sliced correctly. At most gyros joints, I beg people to let the meat sear or char on the rotisserie before slicing it. Still, I rarely get what I want. At Gazaliâs, I never need to ask; it will be done that way.

That enhances the flavor of the lamb. Most gyros dispensed in the Midwest are mere delivery systems for tzatziki, or even unthinkable things like Sriracha, mayo or ketchup. A gyros at Gazaliâs is served on fresh pita, with homemade tzatziki, lettuce and tomato.

Shawarma, the grilled chicken dish of Mediterranean renown, is served two ways: with mayo, Swiss cheese and lettuce; or with homemade garlic sauce, pickle, onion, lettuce and tomato. All pita wrap sandwiches can be ordered spicy, too. Falafel balls with hummus and tahini sauce, or tuna salad, are also available as wraps.

If you donât want your pita touching your meat or cheese (Lebanon is next door to Israel after all), all the above are served in salads, with pita on the side. Also, tabouli is made here with a twist â quinoa and garbanzos are substituted for the usual bulgur wheat, along with parsley, olive oil, tomatoes, lemon and onions. Baba ganoush is available as a side, with smoky roasted, mashed eggplants mixed with tahini, a sauce made from roasted, hulled sesame. Hummus is vegan. They are trying out a new vegan burger, too.

Sandwiches cost $8-$8.50. For $3 more, you can add a generous Greek-style salad or a regional soup, like lentil, plus soft drinks. Salad dishes cost $6-$12. Sides like baba ganoush cost $6. Stuffed grape leaves ($1) and baklava ($3) are also sold separately. Wines are newly available. Like all superior college town hangouts, good literature is provided. A sign warns though that there is no Wi-Fi, âTry talking to each other.â