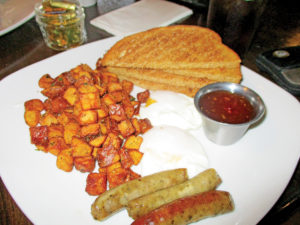 Eggs & Jam is a rare bird in Des Moines. Its exact array of plumage, diet and song has not been seen or heard here before. The breakfast hotspot is not just about bacon, eggs, hashed browns and toast. Nor is it a breakfast buffet with an endless fountain of bloody marys. Itâs the immediate descendent of a sad moment in Des Moines history. After complaints from the PC crowd ran its parent store, âMe So Hungry,â out of business. (I am told the latterâs name was perceived to be racist by people who were obviously too hip to have read an Armistead Maupin novel.) Fortunately, the owners persevered with their concept, and itâs been well received under its new name. After all, who doesnât like eggs and jam?

This theme restaurant only serves breakfast, and it is built around homemade jams and the early years of rap â before that genre had gone gangster, before the bass line dominated any semblance of melody, and before its soul influences had been buried. This type of music doesnât get much representation in Iowa these days, and the response of customers suggests itâs still much loved, at least by the generation who came of age in the 1990s. The art, the menu names and the vibe are all tied into the soundtrack. Most everyone seems to like it.

Told that the mimosa chicken and waffles dish was the most popular, I started with that. Two boneless pieces of crispy chicken breast were served with a golden waffle and orange marmalade. All the jams are homemade, and they are the menuâs superstars. Bread pudding was made with pumpernickel and brioche, sausage, cheese and sausage gravy. The latter was divinely smooth. A soft cooked egg topped the dish.

A baked red pepper was stuffed with turkey sausage, spinach and egg white quiche. Four biscuit dishes ranged from Italian to Asian in inspiration, but the basic biscuit with sausage gravy was the best of the lot. Omelets ranged from seasonal vegetable style, to chorizo with Cotija cheese. The vegan pancakes â still called âveganâ rather than âplant-basedâ because of the 1990s theme â along with almond butter and fresh fruit, also impressed.

French toast was served with a raspberry and Chambord cream option, or as an oatmeal stout battered version with banana brÃ»lÃ©e. The Belgian waffles, another of the most popular dishes, were served with rotating toppings.

Mimosas are big here as are the tropical cocktails, most of which featured vodka. The majority of breakfast entrees cost $11, a few were a buck less and a few a buck more. Potatoes, cubed, were inconsistent in my experiences. Sometimes crisp enough but too often dry and overbrowned. They tasted baked more than fried to me and left me dreaming of other breakfast potatoes, like those from Mr. Filet or Boswellâs, two wind grieved local legends of morning dining. The toast, too, was inconsistent and too often served too cold to melt butter. Still, one needs to order it as a vehicle to taste the fabulous homemade jams. Eggs were consistently cooked exactly as ordered. Crowds on weekends were large, expect long waits at prime times. During the week, no worries about waiting. Waiters sometimes ask if they can make you a complimentary iced tea for the road.

Bottom line: Most new restaurants try to offer âunique new takesâ but few ever live up to their hype. Eggs & Jam does so without going too far out of the box. Itâs a great breakfast-brunch cafÃ© with jam as its featured star attraction. It brings a sweet, nostalgic theme of 1990s rap culture to a town where all things rap are often more reviled than revered. ♦