New kids and how they measure up 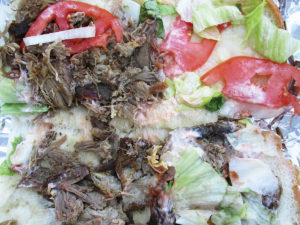 In terms of per store profits, Chick-Fil-A is by far the most successful American chain restaurant. McDonaldâs leads them in total sales and profits but trails them by a lot in per store sales and profits. This is amazing given that the College Park, Georgia, based chain does not open on Sundays, traditionally the day most associated with fried chicken.

Success breeds imitators. Two new fried chicken companies opened recently in Des Moines, modeled more after Chick-Fil-A than KFC or Popeyeâs by specializing in boneless fried tenders and wings. Wingstop is a rapidly expanding Texas company that offers both boneless and boned wings plus tenders with a large choice in sauce flavors, from lemon pepper to Korean. My visits were plagued by slow service. The chicken was relatively tender and crispy. The sauces were all quite sweet. The chicken and fries there are deep fried in soy or rapeseed oil. Those are cheaper and have lower smoke points than Chick-Fil-Aâs peanut oil, so it probably takes a little longer to cook. (Five Guys is the only other major chain that splurges for peanut oil.) Tenders can be taken from the tenderloin (the inner part of the breast) or from the entire breast. Chick-Fil-A only uses tenderloins. Wingstop not so.

Raising Caneâs of Louisiana uses both breast parts and deep fries in soy and rape oils. Their tenders, called fingers, were delivered quickly despite being âcooked when ordered.â They were not as juicy as Chick-Fil-Aâs but were crisp and consistently golden, suggesting they are good at filtering their oils. They had a most focused menu, with only fingers, fries, cole slaw, toast and beverages. They had fewer, simpler sauces than Wingstop. Still, Chick-Fil-Aâs dominance seems unchallenged. They pressure fry their chicken in peanut oil. This makes them tenderer, and the oil makes them crisper than the new kids on the block. It apparently pays off to spend the extra money for better oil and more sophisticated equipment. (It was reported last month that Chick-Fil-A might have to raise prices because their pressure cookers are Chinese and in danger of tariffs.)

Puerto Rico restaurant opened recently in Windsor Heights. Business was so good that the first two times I visited I was told they were âout of pork, out of shrimp.â I perused the menu and only found three items that did not include pork or shrimp. They do have an all-day buffet ($10, two entrees) that includes a couple chicken dishes, including good fried chicken, but that was also sold out.

Mofongos, one of the great dishes of North America, are made on Fridays and Saturdays. An American take on the west African fufu, this is made with green plantains that are fried, then mashed with garlic and salt to mold into a mashed ball that absorbs other flavors as well as any food. The back hallway of Puerto Rico is stacked with boxes of plantains. Most are covered or stuffed with pork or shrimp and other seafoods.

Service is slow, even when they are not busy. To-go orders were double wrapped in foil, so much better than Styrofoam. ♦