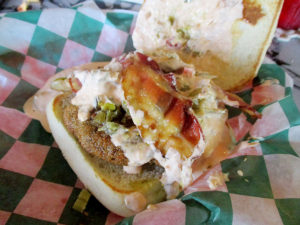 Establishing an identity in the restaurant world is wrought with the same anxieties as it is for a teenager. How can you stand out as unique and still fit in and be popular? (Remember dinner theater?) If you try to be the first one to try something new, will anyone accept you? (Des Moinesâ first sushi joint failed sadly, and no one else dared try it for a decade.) How can you be different, but not too different? A pair of new sports bars seem to have figured that out.

On the south edge of East Village, Trumanâs Kansas City Pizza Kitchen has taken over a handsome, renovated restaurant that failed recently as both a sausage-forward bar and grill (Capitol Pub & Hot Dog) and a Mexican restaurant (Margaritaâs). Sports bars are competitive as hell, especially in the suburbs. Okoboji Grill dominated the genre here for a while before being vanquished by younger rising stars. Sports bars are ubiquitous. My granddaughter says that every place with more than one TV is a sports bar. Trumanâs popularity â they have been packed on my visits â suggests they have found a niche. That would be their Kansas City identity. The interior decorator is obviously obsessed with the Chiefs and Royals. One-third of Trumanâs 24 beers on tap is a Kansas City product. Sandwiches and pies are named for Kansas City sports legends â Bobby Bell, Lenny Dawson, Ed Podolak and even Tony DiPardo, the diminutive conductor of the Chiefs band who died at age 99 in 2012.

Trumanâs also distinguishes its identity with really good products. The tap beers include the superb Keg Creek of Glenwood, along with many more local brews that are familiar in central Iowa. The pizza pies are thick crusted, but not deep dish thick. They are heavy handed with toppings and sauces that include Kansas City style brisket. The most creative sandwich is the DiPardo, which mixes Grazianoâs Italian sausage with country sausage, breads that and fries it crisp as a tenderloin. They are topped with giardiniera, bacon and a very sweet cream sauce that is called âtomato aioli.â Burgers were generous and came with a side for $8 or $9, a real bargain for a sports bar. Weekday lunch specials include some iconic Midwest dishes that are fading away from menus â chicken and dumplings, chicken and noodles, and a casserole of the week. Weekend brunch incorporates burnt ends in a Benedict dish.

Just north of Urbandale Avenue on Merle Hay Road, transplanted Wisconsinites have opened Wisco Grub and Pub to celebrate the Brewers, Bucks, Badgers and Packers. A Badger grad myself, I can assure you the menu is âauthenticâ to Buckyland. Appetizers include cheese-laden takes on sports bar standards like pretzels, nachos and, especially, fries. There are three different kinds of fries, and all come with cheese sauces.

The Wisconsin cheese steak (which differs from the Philly cheese steak in that mozzarella and beer cheese are used and Cheese Whiz never is) brought back old memories of State Street nights in Madison. Brats are homemade at Wisco and correctly cooked in beer. Half-pound burgers, including the Wisconsin essential butter burger, are priced less than $10 including fries or salad. My favorite dishes were shark tenders and crispy reuben rolls. The beer menu was more ordinary than Trumanâs but included some Wisconsin craft beers, too. Fish fries are held on Fridays. Perhaps the most dramatic way Wisco distinguishes itself from other sports bars is by closing on Sundays, usually a big day for the genre. ♦