âAvatar: The Way of Waterâ fails to evolve 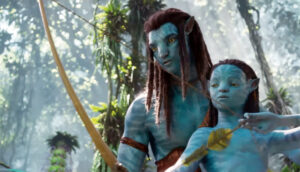 Rewind your mind to 2009: It was the worst financial crisis and recession since the Great Depression, Barack Obama is sworn in as president, and âAvatarâ hit the big screen. The positive reception upon the filmâs release, however, has shifted arguably to much more critical (at least for critics vs. fans, though the re-release and re-re-release makes strong arguments against them). Many have likened it to âPocahontasâ¦ IN SPACE!!!â I felt it was more âDances with [Space] Wolves,â but to each their own.

Ultimately, âAvatarâ was visually stunning with a story told better by other creatives. And, much like the first film, âAvatar: The Way of Waterâ (âAvatar 2â) leaves audiences reminiscing about other movies even as the visuals in this movie desperately try to keep your attention.

About 15 years after the conclusion of Avatar â which saw the âsky peopleâ booted off the planet by the Naâvi â the indigenous people live peacefully. Jake Sully (Sam Worthington) has fully adapted to his avatar body, and, together with his wife, Neytiri (Zoe Saldana), he attentively watches the development of his four children, one of them the daughter of Dr. Grace Augustine whom the Sullys adopted. Naturally, harmony doesnât last forever, and the return of the sky people fosters in a new age of heartbreak for the Naâvi. To avoid further destruction to their forest home and the tribe that accepted him, Jake takes his brood and flees to another part of the planet to save his family.

The Sullys find themselves settling in â or attempting to â with the Metkayina water clan, led by proud warrior Tonowari (Cliff Curtis) and his wife, Ronal (Kate Winslet), who take in the refugees with some hesitation. Now, Jake and the rest of his family must adapt to yet another new environment: the lush, treacherous waters and reefs of Pandoraâs coast.

What follows in the second act is a visual delight to behold. Itâs clear director James Cameron has fallen deeply in love with his creation that heâd like nothing more than to linger on every flora or fauna. Which is fine, to a point. Yes, the underwater physics and breathtaking reefs will leave you in awe, but impressive visuals do not make a story. Thereâs no doubt the movieâs 192-minute runtime is weighed down by sequences in this section of the film.

Annoying foreshadowing and empty storytelling fill in blanks when the movie isnât doing its best impression as the prettiest screensaver youâve ever seen in your life. Jakeâs adopted daughter appears to be water Jesus, his son befriends and figuratively frees Willy, and the movie then spends a fair bit of time showing the viewer how hunting animals is bad.

Logic holes abound, as do inconvenient issues like why the âliving planetâ doesnât simply overwhelm the human beachhead with rampaging fauna the way it did in the original Avatar. The sequel doesnât have an answer, nor does it bother looking for one.

Addressing some of these gaps could have presented this movie as a proper sequel, but instead it leaves audiences feeling like they just watched âAvatar 1.2.â A rift between avatars like Sully and Eywa could justify why Pandora refuses to act against the invaders. But, here again, Cameron doesnât invest anything further in the story, relying on the same formula that worked the first time and trusting the visuals to hide the recycled plot.

Sullyâs journey is a virtual mirror of the first film, as he leaves the life he knew and learns to adopt the ways of a new one. The only difference now is he is a terrible father, who plays favorites with his kids, gets enraged when they surpass expectations, and refuses to show them any emotion besides disappointment. Jake repeats that a parent should protect his children and that a fatherâs job is to toughen up his sons. That might resonate with a more conservative parcel of Avatarâs fans, but it doesnât really make sense to still reproduce this narrowminded mantra after spending 15 years living in peace and harmony among the Naâvi. Just look to Neytiri, who proves you can be a loving parent and still give everything you got to keep your family safe.

The final set piece harkens back to Cameronâs greatest hits with visuals reminiscent of âTitanicâ and âTerminator 2.â

Overall, itâs not a bad movie if youâre just going to see some cool 3D and wonderfully realized, hyper-realistic animation in IMAX. Just expect more of the same with this sequel, as opposed to the evolving we would expect from a 13-year production. ♦