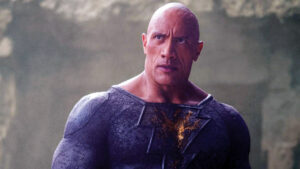 âBlack Adamâ opens with a burst of exposition and backstory so cumbersome that it might as well be self-parody. (âBefore Rome, before Babylon, before the pyramids â¦â) Amid the mumbo jumbo about dark magic, the crown of Sabbaq, and the six demons of the underworld (or whatever) there is a promising idea at the heart of âBlack Adam,â at least initially.

Tomb raider Adrianna Tomaz (Sarah Shahi) leads a group with the brilliant plan of rooting the crown out of its 5,000-year hiding place in order to re-hide it elsewhere, all to keep it out of Intergangâs hands. That project goes about as well as efforts to protect a McGuffin always do. Adrianna winds up releasing Teth-Adam, who starts off by frying Adriannaâs captors like a living Ark of the Covenant, then solemnly annihilates an entire Intergang squad to the (little too on the nose) tune of âPaint It, Black.â

âBlack Adamâ becomes an immediate person of interest to Task Force X leader Amanda Waller (Viola Davis). Despite Waller spending two âSuicide Squadâ films and a spin-off TV show explaining that Task Force X was set up to force supervillains to do the dirty work of the U.S. government, sheâs now apparently in charge of the Justice Society of America, too.

After Black Adamâs introduction, the movie then proceeds to casually introduce us to a whole bunch of superheroes as if weâve somehow known them all along: Kent Nelson, aka Doctor Fate (Pierce Brosnan), whoâs more than a little reminiscent of a certain Marvel Doctor; Carter Hall, aka Hawkman (Aldis Hodge), the team leader; Albert Rothstein, aka Ant Man Atom Smasher (Noah Centineo), comedic relief and living fork lift; Maxine Hunkel, aka Cyclone (Quintessa Swindell), who spins really good (?). Some of these characters date back to the 1940s, but for those who didnât encounter them in the comic-book reading days, itâs hard not to wonder who the hell they are. The film assumes a certain familiarity with them, seemingly because their original comic book iterations have been around forever. Theyâre a superhero group given such minimal set-up here that they might as well have been called the Justice League B-team.

The film is set in the imaginary Middle Eastern country of Kahndaq, an ancient, resource-cursed, and once-proud land currently occupied by a mercenary force called the Intergang who are searching for the crown. The occupiers read as a substitute for private military companies like Blackwater. And this is where the movie gets interesting and might have something profound to say. But then it doesnât.

âBlack Adamâ has something intriguing it starts doing, only to promptly give up on it. The Justice Society shows up to teach Black Adam and the angry citizens of Kahndaq that extrajudicial killings are wrong (a character literally says this), and someone points out that the Justice Society, for all the work itâs supposedly been doing around the world to battle oppression and bring justice, has never before come to the troubled land of Kahndaq. That would, of course, make these superheroes hypocrites and colonizers of a different sort. Thatâs interesting! Letâs do something with that â but, no, the film drops this idea almost as soon as itâs expressed. The decision to also depict Kahndaq as a country under the thumb of a white occupying force, only to then primly insist that the true enemy here is a homegrown would-be tyrant comes across as if production realizes that to go any further in that direction would unearth attitudes and ideologies that might ultimately work against the bottom line.

So, no, the hierarchy of power in the DC Universe did not change with the introduction of âBlack Adam.â This was a mediocre film and felt like a color by numbers superhero film, designed to please as many audiences as possible. âBlack Adamâ seems perfectly content to pick over the wilted remains of the superhero-movie salad bar. Its magical element Eternium feels like something found on James Cameronâs brainstorming white board. And the nerdy kid who eagerly advises Black Adam about his powers and catchphrases (Bodhi Sabongui) owes so much to the nerdy kid who eagerly advised Zachary Leviâs character about his powers and catchphrases that it has to be an intentional attempt at parallelism.

Ultimately, the movie is average, something weâve seen a million times before as everything felt recycled. If youâre looking for fresh and new, this might not be your thing. But if you like predictable action, you could do worse than this. ♦