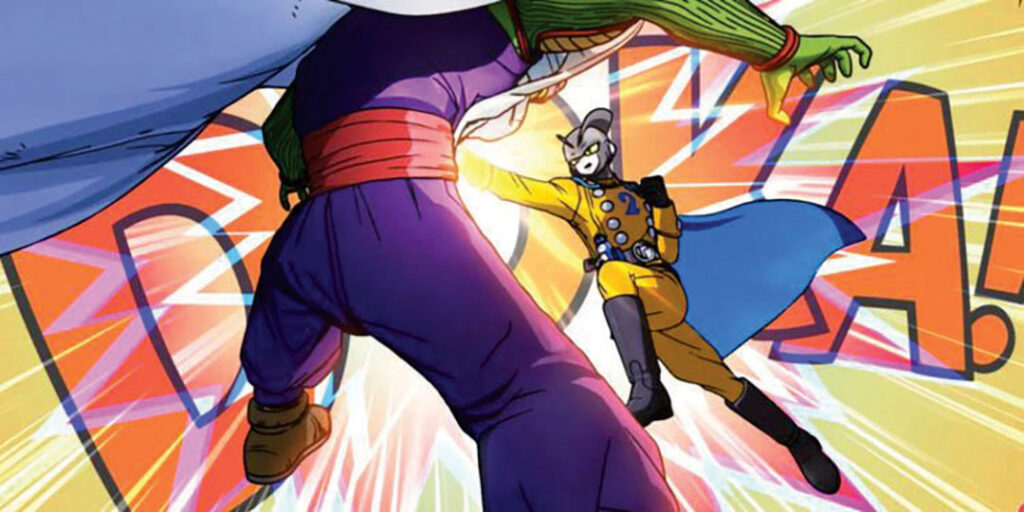 âDragon Ball Super: Super Heroâ has this awkward name apparently because creator Toriyama actually forgot the series was called âDragon Ball Super.â He intended the title to be âDragon Ball Super Hero.â This is on brand for the Toriyama if the rumor is to be believed. (Whatever happened to Launch?) The movie combines the nostalgia of âZ,â the humor of âAbridged,â and voice actors giving more personality to the characters than ever before (Christopher Sabat in particular is a ton of green fun as Piccolo).

The story can be summed up easily: Good people are given some bad information, and the expected conflict ensues.

An exceptionally drawn 2D exposition dump of the original Dragon Ball series in updated animation kicks off the movie. This introduction is absolutely beautiful and immediately brings longtime fans back to the IP while offering new fans a means of entering the lore without having to lean over to their buddy and ask, âWhoâs that? Why are they doing that? Does he know them? Can they do that?â

However, the animation changes after this introduction to computer generated. Itâs fluid 3D yet styled to evoke the classic lines and angular body shapes of the anime. While hesitation is understandable, if this is why youâre on the fence about seeing this movie, hop off and grab a ticket. Whether or not audience members respond favorably to this change is up to personal preference, but it looks great for 3D masquerading as 2D and adds a unique slick quality to the fight scenes.

This time, our favorite Saiyan dads are too busy off training somewhere with literal gods to defend Earth. So, itâs down to Piccolo and his protÃ©gÃ© to stave off the Red Ribbon Army, whoâve decided to pick another fight with Capsule Corp, despite how every previous encounter has turned out. Dr. Geroâs grandson Dr. Hedo (Android 16âs apparent sire) is released from prison and immediately picked up by Magenta (the love child of Red and Violet from the original â I know, bonkers), the new leader of the Red Ribbon Army. Dr. Hedo wants to create the perfect android, but unlike his grandfather, Dr. Hedo is a superhero fanboy. The Gammas are androids built to be caped heroes, and they have a cartoonish demeanor. Oneâs a bit of a boy scout, like Superman, while the otherâs got a rebellious streak a la Iron Man.

But perhaps the best part about this movie is that it finally puts Gohan and Piccolo in the spotlight. After decades of watching the Dragon Ball Z characters sit in Goku and Vegetaâs shadows on the anime series, occasionally helping out or getting a prominent moment, we see the familial team unleash the potential fans knew they had all along. And the Gammas provide a fun duo that make formidable opponents for Gohan and Piccolo.

Cue many battle sequences consisting of muscly dudes screaming at each other while their hair stands on end, as is tradition.

In many ways, âSuper Heroâ is a love letter to Gohan and Piccolo that highlights their lasting relationship. Theyâre both family men now, Piccolo training Pan and helping out Bulma and Videl, while Gohan continues on his scientific research (i.e., Super SaiyAnts).

Much as itâs great to see Piccolo flex his muscles, and he does that in a big orange way, thereâs a delightful comedy series to be gleaned from him playing nanny and stepdad as needed. Heâs come a long way from the wastelands, now living in a home furnished with King Piccoloâs throne (or a recreation), a kitty-covered cell phone, and a mountain of plushies. Plus, youâll be treated to one of the most absurd interactions between Piccolo and Bulma thatâll leave you just as flabbergasted as the former but likely relating to the latter.

While he gets the lionâs share, Piccolo doesnât get all the jokes. Pan is cute and delivers some of the best physical comedy of the movie. Krillan continues to be the DBZ canary in the coal mine. Shenron demonstrates his familiarity with the Z Warriors. Even Beerus shows his loony-tune-inspired lecherous side (apparently, he has a type, and that type is Cheelai).

âDragon Ball Super: Super Heroâ is a compelling exploration of the father-and-son bond between Gohan and Piccolo, who take center stage for once to give the Goku and Vegeta show a rest. Itâs not taking itself too seriously, and the plot is held together with minced Senzu beans, but for a feature-length fight scene intercut with some hearty chuckles, itâs worth fitting into your schedule. ♦