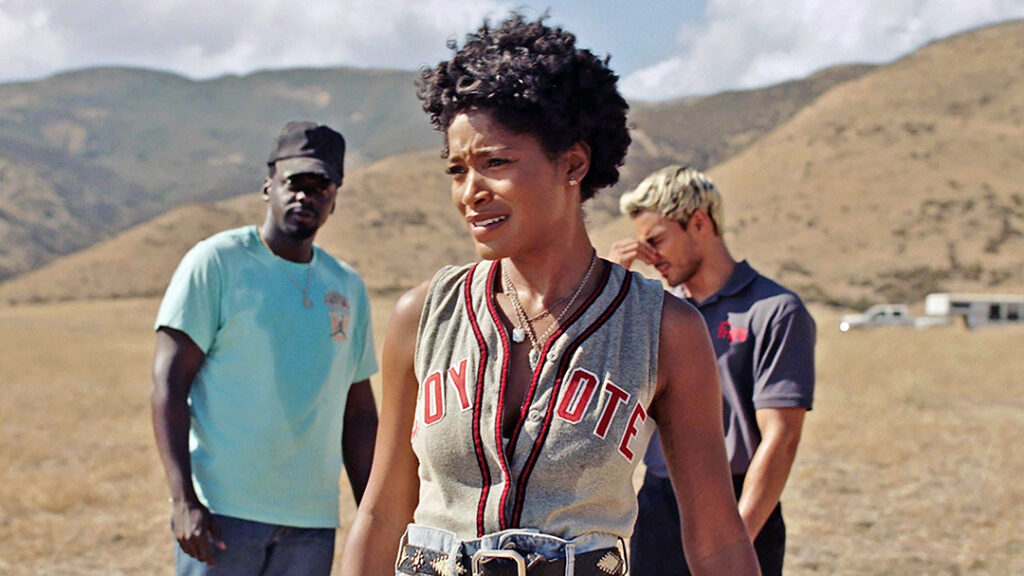 An empty television recording studio greets us from the once black screen. The AUDIENCE CLAP sign light clicks on and off. On and off. A rustle behind the couch provides a moment of hope. Signs of life amongst blood smeared walls and a slow but regular barrage of bursting birthday balloons. But hope quickly leaves as a crimson stained chimpanzee costumed up as a child pokes the unflinching foot of a woman on the ground. A little way off, a shoe stands toe-up, sole hidden (balanced by an uncanny force on the heel) while a single blooddrop shimmers on near the ring toe. It is a textile monolith seemingly standing front and center among the primitive survivors.

âNopeâ explores themes of arrogance and spectacle. Its opening scenes may be cryptic at first, but the movie comes full circle and makes a powerful revelation about its first moments.

And, certainly, a second viewing of âNopeâ would help untangle exactly whatâs going on.

The crux of the story has to do with siblings played by Daniel Kaluuya (OJ) and Keke Palmer (Emerald), who are running the family business of providing and acting as handlers of horses for television and movie productions. Soon they experience the presence of an extraterrestrial on their California ranch. To prove the existence of this phenomenon, they try to capture the UFO (or, ugh, UAP) on film.

Thatâs the plot in a nutshell. While the setup is deliberate, viewers are asked to be patient. Peele has earned the benefit of the doubt. It takes a while for the action in âNopeâ to get going. When it does, itâs quite a ride.

Peele also takes the time to pay homage to films and directors he loves. Among many different directorial elements, Steven Spielberg shines through most. But not due to âClose Encounters,â as one might think. This is Peeleâs âJaws.â It uses suspense in many of the same ways. Instead of a shark in the sea, he uses a UFO in the sky. Instead of the open water to hide in, clouds harbor this beast. âJawsâ was famous for making people not want to go in the water, but âNopeâ will have you terrified to look up at the sky.

Peele effortlessly slips comedy into all his otherwise horrifying and terrifying movie scripts. But his skills also include a natural ability to craft tension to levels of mastery. He has this instinct on how to manufacture and elicit emotional responses that he wants to get out of the viewers. The use of Wacky Wavey Inflatable Arm Flailing Tube Men presents comedy and suspense as scene partners whose tension-inducing results are hard to believe (even as Iâm writing this).

He does this well again and again, using so little to accomplish so much without trying. The comedy is subtle and dropped in at the right times to try to offset the tension and almost forcing viewers to exhale during more intense scenes but never in a way that flips the tone. It is gallows humor that provides a brief escape before reality quickly sets back in. Peele manages to put a lot of fun into the writing from the blunt delivery of Kaluuyaâs lines to the energetic attitude of Palmerâs Em. It comes off naturally and doesnât get in the way of the movie.

Employing a film tactic from the silent era, Peele also makes regular use of title cards â a tangible way of separating acts and storylines in movies.

While the opening to the movie, as well as this review, may have felt random or even off, the story of the chimp who went ape, whose name we learn to be Gordy, does get flushed out in the most terrifying way. Itâs a cautionary tale about trying to tame and make money off the untamable.

âNopeâ is a frenzied and brutal examination of spectacle, how we process the world, historical erasure, animal cruelty and the arrogance of challenging forces beyond our comprehension â and thatâs barely scratching the surface. ♦