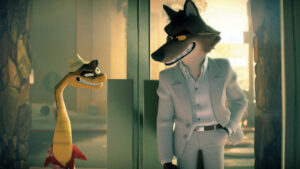 âWe may be bad, but weâre so good at it.â Mr. Wolf (Sam Rockwell), the lupine leader of the larcenous critters at the center of the animated comedy âThe Bad Guys,â knows whereof he speaks.

Crime is fun, and no one enjoys it more than these five. But thereâs an angry edge to their enjoyment as they acknowledge that their species is âthe villain of every story! Guilty until proven innocent!â Mr. Wolf and his associates have a rep, perhaps not entirely undeserved, so they may as well live up to it.

The heists are several and complex (a museum piece is purloined), and the fortunes of the bad guys varies. Which is to say they get busted a lot and then set free to heist again.

As with the more grown-up heist movies that precede it, the style goes a long way toward enlivening a story that may seem familiar to cartoon fans young and old. Could doing good possibly feel better than being bad? An unanticipated feel-good sensation manifests itself in a telltale waggle of his wolfy tail. In other words, these are bad guys who are unexpectedly given the opportunity to improve themselves (e.g.,  âDespicable Meâ) and break out of the villainous role that society assigned them (e.g., âWreck-It Ralphâ) based on the harmful stereotypes of their animal characteristics (e.g., âZootopiaâ). This isnât even the first time DreamWorks has gone to this well; Megamind features a supervillain discovering his inner goodness as well.

Removing âThe Bad Guysâ from a superhero/supervillain context helps distinguish it from its many predecessors mentioned above. Mr. Wolf experiences doubt over whether he should continue to pursue a life of crime, but when he initially convinces Governor Foxington (Zazie Beetz) to release his captured gang into the custody of known philanthropist Professor Marmalade (Richard Ayoade), whose motivations are strangely obscure, to be reformed, he has future heisting possibilities in mind. Other characters have secret agendas of their own.

The characters are well-defined, and Rockwell holds the picture together as he conveys Mr. Wolfâs shifting emotional states: suave, vexed, and morally conflicted. Itâs a movie definitely for kids, but thereâs enough substance for adults as well.

The plotting consistently surprises as double-crosses abound. And the set-piece action sequences (car chases a specialty here) are quite something. Unfortunately, âThe Bad Guysâ forces in a musical number thatâs a painful bore. But what it occasionally misses along the way, it makes up for in a grand finale that involves clever narrative back-tracking and a jaw-dropping massive attack of hypnotized guinea pigs.

Should this film prove a hit, the book series it draws inspiration from offers plenty more to adapt, roping in aliens and extra-dimensional beings. But like the âDespicable Meâ series, âThe Bad Guysâ may find ever-diminishing returns once the villain protagonists no longer qualify as despicable or bad. For now, at least, that mixed morality is not just part of the fun, but the primary selling point. ♦