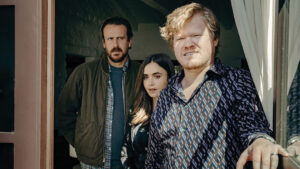 âWindfallâ is the kind of acting experiment that works for me. Trap three talented actors on a single set and bounce them off each other. The premise here is strong enough to keep the film afloat for about an hour as these very different acting energies collide in the middle of the room.

However, that goodwill from that first hour dissipates as the tone changes radically. Still, thereâs at least one great performance in here, and the whole venture clocks in at a blissfully brief 92 minutes.

The sole location is a gated estate somewhere in southern California, with a handsome modernistic house, grandiose gardens, a pool with sauna and little cabins, and groves of trees. As the film opens, a lanky, scruffy interloper simply called Nobody (Jason Segel) has ensconced himself there, sampling its creature comforts and rifling through shelves for money and valuables. The property belongs to a tech magnate (Jesse Plemons) and his wife (Lily Collins), who soon arrive for an 11th-hour break, sending the intruder into a tizzy.

It is an undeniably impressive premise, if a wee bit pretentious, and it is inevitable that the rest of the film is not going to fall at least slightly short.

The film makes a curious decision to not give a specific name to its trio of main characters. For instance, Segelâs character is called âNobodyâ in the credits, on account of him being one of the have-nots fighting back against the haves. The billionaire in question is called CEO, and his wife is called, well, Wife.

One can see the film is trying to slot the characters in their positions in the social strata. This goes well with the filmâs major theme of class identity and how it affects individuals. For instance, Nobody is literally a nobody, who perhaps lost his job in a round of layoffs at the company, something that the CEO nonchalantly calls a necessary measure to maintain the companyâs financial health. The CEO himself, a loathsome and amoral man who is a stand-in for any of the multiple tech-bros like Zuckerberg who are blissfully unaware about their privileges, says it âfucking sucksâ to be one of the worldâs richest men.

The Wife feels more of a kinship to Nobody, for we learn she rose from a similar background, and her marriage is just a thing she had to do to make it in this world. She is also mildly disgusted with her husband, avoiding sex whenever possible, and is on birth control, unbeknownst to him.

All three, in fact, are unsatisfied in their lives. Nobody is tired of being stepped on by richer, more upwardly mobile men, and the Wife is tired of this male-dominated world. The CEO also admits he gets targeted by ânothingâ people every day who just want him to fail (all with a straight face). Plemons, used to playing weirdos by now, is scary good here and brings an energy to his character that holds the film together. So much so, that when he disappears for a long nighttime conversation between Collins and Segel, the film starts to sag. It never recovers after that scene.

Inevitably, things happen during their time together. A garrulous gardener (Omar Leyva) shows up with unfortunate results. The relationship between the CEO and his wife shows signs of strain, deriving from his condescending, controlling attitude and her dreams of what might have been. Attempts to escape are foiled, and the CEOâs periodic needling of Nobody causes the friction to amp up.

For most of its runtime, âWindfallâ makes for smooth sailing. It does struggle to manage its tone and often cannot decide what it wants to be â a social thriller with comedic undertones or a full-blown noir. The occasional turn to seriousness fares even worse, most notably when Nobody and the wife have a heart-to-heart in the courtyard at night as the CEO sleeps. It paves the way to the final twist but really doesnât adequately prepare one for it, as downbeat as it is.

Itâs an arguably failed experiment, but not all that painful. Thereâs a lackadaisical attempt to say something about wealth in America and what it represents for many â what should people with so much do with it and does having so much make one any more interesting or necessary than someone who doesnât â but itâs more two-joints-in pondering than anything approaching genuine social commentary.

âWindfallâ might not bring the enormous treasure the title suggests, but if you keep your expectations low, it will provide a nice return on the time you invest in it. ♦