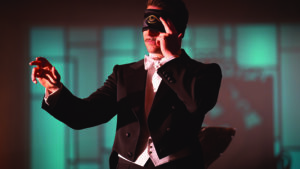 When charismatic but down-on-his-luck Stanton Carlisle (Bradley Cooper) endears himself to clairvoyant Zeena Krumbein (Toni Collette) and her has-been mentalist husband Pete (David Strathairn) at a traveling carnival, he earns his golden ticket to success, using the newly acquired knowledge of the ways of mentalists to grift the wealthy elite of 1940s New York Society. With the naÃ¯ve Molly Cahill (Rooney Mara) loyally by his side, Stanton plots to con Ezra Grindle (Richard Jenkins), a dangerous tycoon with the kind of money that can raise the dead. However, the aid of a mysterious psychiatrist Dr. Lilith Ritter (Cate Blanchett) might be his most formidable opponent yet.

âNightmare Alleyâ journeys into an arrestingly dark, sweeping and realistic world of film noir. The movie moves from the inner circle of a 1930s traveling carnival, a realm of shocks and wonders, to the halls of wealth and power where seduction and treachery reside. At its core is a man who makes the mistake of believing the lies spewing from his mouth. Stanton Carlisle begins as a literal nobody, a man who has torched his scarred past, and decides to join a passing carnival and become a member of a world unto itself. Here, no questions are asked, and no one cares who you were before, as long as you do the job assigned to you.

The carny who changes Stantonâs life the most is Zeenaâs husband, Pete, a fading star who drowns his self-recriminations in the bottle. Once Pete was the creator of a hit mind-reading act, based on an ingenious code he created, that wowed high-paying audiences. Now isolated, guilt-ridden and drowning in booze, Pete is momentarily buoyed by the thought of taking Stanton under his wing â oblivious to his wifeâs relationship with him. He approaches him with a naÃ¯ve, paternalistic pride. Even though Pete warns Stanton to never abuse the act in ways that might take advantage of the audience, or a spook show, thatâs exactly what Stanton does.

The carnivalâs manager, Clem Hoately (William Dafoe), is also its bombastic barker, an old school carny with an intimidating gruffness but a willingness to give anyone his or her one chance. Clem gives Stanton refuge, but he also demonstrates the depths of his own darkness in his harsh treatment of the carnivalâs geek. The carnival geeks are usually opium junkies or alcoholics deprived of their fix, willing to do anything to avoid withdrawal. In the carnival hierarchy, the geek is the lowest in their societal pecking order, reviled and pitied even by carnies. Pulled from dark alleys in the dead of night, the geek is everything Stanton fears about himself. Unmissable with his two-tone heeled boots and crimson-and-gold barkerâs jacket, Clem is one of the carnivalâs most multihued characters â and one of its most unpredictable.

Stantonâs rise through the ranks of the carnival troupe continues onto the higher echelons of American society all against the background of Great Depression-era America. Carlisle is a drifting hustler who transforms himself into a dazzling showman and manipulator so masterful he comes to believe he can outwit fate. Once he learns how profitable delusion and deception can be, Stanton never turns back. Heâs a man whoâs absolutely flush with privilege yet still feels the world owes him more. He has people who believe in him, who love him and trust him. Yet, his greed and his own hubris are so strong that, rather than reciprocating, he uses those people for his own personal gain â no matter the cost.

Within âNightmare Alley,â there are seething layers of corruption, vice, lust, betrayal and cosmic absurdity that build as Stanton learns to cynically prey on the human need to believe in something outside themselves and our world.

As Stantonâs skills increase and he becomes a consummate performer, the carnival world gives way to a city realm far shinier and glitzier on the surface but seething with anxieties underneath. Once Stanton and Molly leave for the bright lights of the city, where they strike it rich as a swanky nightclub act, the movie flips visuals for a sleek Art Deco aesthetic reflecting the hot new trends of the late 1930s prevails in the second part of the film.

Stanton sets his sights on a very lofty goal. He aims to gain the trust of the townâs wealthiest industrial magnate, Ezra Grindle, a man haunted by loss and willing to go to any lengths for answers. Despite his riches, Grindle is blind to all that he possesses. Heâs fixated instead on his fear that he caused the death of a woman he loved. ♦