âLucaâ delivers a slice of summer

Remember that time you went on summer vacation when you were a kid? Maybe it was with your family. Maybe it was at a stay-away camp. Either way, you found another kid your age who was not only fun but helped to shape the person youâd become (at least for the remainder of the summer).

Thatâs something of the premise of Disney Pixarâs newest release, âLuca.â 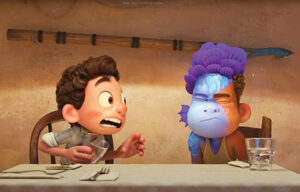 Directed by Enrico Casarosa and written by Jesse Andrews and Mike Jones, the story centers on the Italian fishing town of Portorosso. In the nearby waters, Luca (Jacob Tremblay) is a young sea monster who yearns to explore the surface, despite the warnings of his parents (Maya Rudolph, Jim Gaffigan). Lucaâs luck changes when he befriends Alberto (Jack Dylan Grazer), a fellow sea monster who has been living above the water. To Lucaâs shock, he discovers that when a sea monster steps on land, it immediately changes into human form. (This is never explained. Nor is it explained why sometimes it happens as soon as they leave the ocean, and other times they need to be dry.) Luca and Albertoâs friendship blossoms as they explore the surface, dreaming of buying a Vespa and traveling the world.

Their opportunity comes when they meet Giulia (Emma Berman), a human who lives in town. Giulia tells them of the Portorosso Cup Race, an annual triathlon (consisting of swimming, eating pasta and biking â in that order) she plans on entering. Hoping that the grand prize can help them earn the Vespa of their dreams, Luca and Alberto join forces with Giulia and enter the race. Standing in their way is the cocky and arrogant teenager Ercole Visconti (Saverio Raimondo), who has won the race multiple years in a row, though itâs clear this event is for younger children and the past few years heâs been asked if heâs âa bit too oldâ to be signing up.

Some characters feel a bit clichÃ©, such as the parents being overprotective and quirky. Same with the grandma who helps protect Lucaâs secret from his parents. Or Ercole.

But the filmâs most compelling character is Alberto. He cuts a striking figure with his proud posture and know-it-all attitude. Heâs the kind of boy whoâll just make stuff up if he doesnât know the answer to a question, and whose made-up answers will invariably prove to be far more interesting than the real answer ever could have been. Where Luca is the child whoâs obviously going to be OK, Alberto is the one we need to know will be.

Think back to your summer adventure again. Was there a day you perhaps slept in later than expected or had to do something pre-scheduled with your family that took you away from your newest BFF? In that short amount of time, it seems your new buddy made another friend whoâs already sharing inside jokes with your pal. That feeling of jealousy permeates the conflict of this movie.

While these sort of first act meet-cutes, second act conflict and third act resolution type of movies are common in films, âLucaâ succeeds like many of Pixarâs creations: They focus on the feelings of youth and fears every child has at some point. The fear of not being good enough for the people you want to be around most.

The movie is also absolutely gorgeous â which goes without saying for Pixar â but there were truly moments where I was completely absorbed in looking at tiny details. The colors, shading, subsurface scattering, water, hair, sand and scales simulations look amazing, like skin textures on Lucaâs nose or sea foam on the ocean or the way the town is laid out. You can feel the sunâs rays; you can almost taste the salty sea.

But what really brings it home is how well they capture a childâs imagination. Watching my 2-year-old put our mesh laundry bin on his head and running around âsaving the dayâ might be a scene more specific to my life, but âLucaâ captivates with the seamless transitions from reality to Lucaâs daydreams. Surfing the rings of Saturn, taking a Vespa to the stars to fly alongside fish swimming in outer space. It felt so original, so incredibly possible through his eyes.

It made me feel like a kid again. In a magnificent way. Trying new things. The urge to learn. Taking risks and being silly. Learning about our surroundings more. âLucaâ delivers a slice of summer so rich and sweet that youâll practically taste the gelato on your lips for hours afterward. Itâs a simple pleasure, and one sure to make you smile. ♦