Whatâs the deal with those robot zombies? 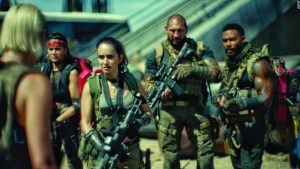 Zack Snyderâs âArmy of the Deadâ displays, and sustains, the filmmakerâs signature brand of punch-drunk verve â at least, in certain stretches. An unforgettable zombie tiger, a strange sort of undead king/queen dynamic that shapes the action, a fun sequence involving using zombies to spring booby traps â these are the kind of fun, clever beats that keep âArmy of the Deadâ alive.

A bit of dialogue reveals that the convoy has recently come from Area 51 and that their undefined payload is so dangerous that their military-grade weapons wonât make much of an impact. When the large container holding that deadly passenger is damaged, it turns out that a zombie invasion was kicked off by a distracted dude getting a hummer while driving who collided into a military vehicle carrying something top secret and very, very nasty. After it opens, the soldiers who survived the initial accident are quickly turned into the undead before climbing a hill to set their sights on Sin City itself â Las Vegas.

Snyder then unfolds a montage of the carnage that quickly happened next. Cannibalistic showgirls prowl for prey. Slot-machine junkies bundling up their remaining pittance dodge the newly infected. A dimwitted Elvis impersonator, wig askew, looks blankly over the carnage as Richard Cheese and Alison Croweâs cover of Elvisâ âViva Las Vegasâ soundtracks the zany bloodshed. Itâs the rare instance where a filmâs climax occurs in the first few minutes. Itâs so good, so self-consciously nuts, that you could probably just stop watching there and be perfectly satisfied.

Taking his cue from â28 Days Later,â Snyder used fast-moving zombies as the primary fright. For âArmy of the Dead,â he takes the next logical leap by crafting two types of flesh-eaters: shamblers (the mindless kind) and alphas (the highly advanced kind). (He also introduces zombies that hibernate; zombies that can dry up in the sun and be revived in the rain; and robot zombies â all with zero payoff as to any explanation for these additional types.) The intro scene shows a muscular, intelligent Patient Zero zombie escaping from the transport convoy. Fast-forward to the filmâs present day, and Vegas isnât the leader-zombieâs prison, itâs the kingdom of his alphas.

The filmâs plot, such as it is, concerns a group of generic badasses who must break into a casino safe in zombie-invested Vegas and lift millions before a nuke is to be dropped on the city to relieve the country of its monster problem.

In âArmy of the Dead,â Snyder fuses two genre templates that generally benefit from tight pacing â the heist film and the zombie invasion thriller â and slows the hybrid plot down to a crawl.

Below are just some of the questions youâll be scratching your head about after the final credits:

How did the military convoy not see the headlights coming miles away? A tactically trained military officer would have spotted the car a mile before.

How does a beat up 1970s Pontiac destroy armored military vehicles?

Why didnât the soldiers just hop back in the Humvee next to them instead of wandering in the desert?

Why didnât the casino boss provide the vault code or booby-trap information?

Why were they so sure that the helicopter would still fly and didnât care much about the weight of the money and the passengers? (The cash alone would have weighed about 4,409 pounds.)