âIf Anything Happens, I Love Youâ 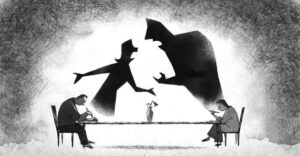 âIf Anything Happens, I Love Youâ is a beautiful but excruciatingly painful portrait of a tragedy. Itâs the kind of art that is so moving, and so honest, that it feels like it must be coming from personal experience. Instead, itâs the tale that is sadly known by far too many parents in this country: The aftermath of losing a child in a school shooting.

Written and directed by Will McCormack and Michael Govier, with gorgeous animation from newcomer Youngran Nho (just out of college) and her team, this 12-minute, wordless short film tells the story of two grieving parents. It opens to a dining room scene of a mother and father sitting on opposite ends of the table. With no eye contact and nothing left to say, they just sit quietly and eat. The only sound you can hear in the room is that of the cutlery and nothing but pin-drop silence. The coupleâs agony, misery and loneliness are shown in black and white, which gives volume and depth to their story. In their subconscious minds, which are shown in the form of black shadows, the two fight, argue and raise their voices at each other. Itâs a fight, for sure, but at least they are communicating in some way.

At first, we donât know why the married couple is eating dinner in sullen silence, the shadow of an argument hanging over them. But we start to suspect, as the mom studiously avoids a room in the house and the dad stares dead-eyed at the TV, that they have lost something too great for words.

Those suspicions are confirmed when the memory of a little girl comes flooding back, triggered by the family cat accidentally turning on the record player in her room. The song â1950â by King Princess fills the air, and the parents remember their vibrant 10-year-young girl who played soccer, snuck her first kiss in the backyard, and seemed to love life, until one day she went to school and never came home.

Given that the film is shown from the POV of a husband and wife who have grown further apart from a horrific occurrence in their own lives, their shadow figures and lighting contrasts convey all their inner emotions better than any dialogue ever could. The somber score by Lindsay Marcus also lets each scene speak for itself through subtle harmonics to let the visuals speak more. And they donât get much louder than seeing memories try in vain to prevent a tragedy from happening. They clearly understand what happens next, and their inability to stop their daughter from walking toward the school makes you want to scream at the screen (or at least turn it off so as not to witness yet another instance of this insanity).

No violence is drawn out. We see only the barest sketch of school doors and hear only the unmistakable sounds of gunshots. The only color on the screen is an American flag. Then, over the sound of sirens, we see the last text any parent hopes to receive:

âIf anything happens, I love you.â

It echoes the gut-wrenching texts sent by students to their loved ones at Marjory Stoneman Douglas High School in Parkland, Florida, in 2018.

The film is in black and white except for the things that belonged to the daughter â the mark on the wall from when the daughter was playing soccer; the T-shirt that comes out of the washing machine; and the flag of America on her school wall. We are shown that the only colors the parents have left in their lives are within the memories of their daughter.

This is a silent film with not even a single dialogue throughout the course of 12 minutes. But, as the saying goes, silence speaks louder than words. Here, a flood of emotions hit you from the very first scene till the last one.

Itâs all but impossible to get to the end of âIf Anything Happens, I Love Youâ without sobbing. To be honest, I started crying again just thinking about it. It is easily one of the most powerful short films of the year, so donât be surprised if you hear about it during Oscar season. ♦