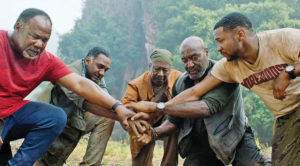 From the very first frame to the opening shots of Spike Leeâs epic new Vietnam chronicle (though referred throughout the film by U.S. veterans and Vietnamese soldiers and civilians alike as âAmericaâs Warâ), âDa 5 Bloods,â it is clear where the filmâs heart lies.

It all starts with Muhammad Ali, perhaps the most outspoken voice of Black discontent during the Vietnam era if ever there was one. Before even a credit sequence, we see Ali excerpted from a 1978 interview, saying: âMy conscience wonât let me go shoot my brother, or some darker people, or some poor hungry people in the mud, for big powerful Americaâ¦ And shoot them for what? They never called me n*****. They never lynched me. They didnât put no dogs on me. They didnât rob me of my nationality.â

Unlike his typical narrative structure, this movie opens (rather than closes) with a montage. One that leaves you feeling sick â an overdose of history and all its bigotry, all its racism, all the injustices and ongoing lies.

The enemy, Leeâs montage more than implies, was back home. And so before the story of âDa 5 Bloodsâ kicks off, weâre forced to reckon with images of the war being fought on American turf, the protests, the hoses, the shootings, the police. Itâs a punch in the gut â a visceral, confronting and often uncomfortable experience.

Set in the present day, four Black Vietnam War veterans â Paul (Delroy Lindo), Otis (Clarke Peters), Melvin (Isiah Whitlock Jr.), and Eddie (Norm Lewis) â land in Ho Chi Minh City, decades after the group was last in the country as soldiers for the American army. Officially, the four are returning to find the remains of their deceased squad leader â Storminâ Norman (Chadwick Boseman, who delivers a short but powerful performance) â and finally bring him home. Unofficially, however, the group looks to gather some gold that was repossessed by the five back during the war.

Through flashbacks, which Lee frames in a 3:4 aspect ratio, itâs revealed the gold was captured by the then-five soldiers as part of a mission. The bars were intended as payment from the U.S. to the South Vietnamese forces, but Norman, who sees it as reparation, convinces his friends their community is owed payment for centuries of crimes against their people â from slavery to fighting in a war halfway across the world while the country they volunteered for is killing their brothers and sisters at home.

The creative decision to use the same actors in the flashbacks as in present is ambitious and something that might take a moment getting used to. But, in the end, it makes sense.

The chemistry between all the actors here is perfect. You instantly believe their friendships as soon as they are on screen and feel it is natural considering what they have been through together. Perhaps most telling about any friendship is the way humor is shared between all the characters. The dark humor and brutal honesty between everyone was infectious to watch and made the characters even more real and likeable. It didnât take long before I felt like I knew these men and could see what brought them together and what threatened to come between them. Itâs not always smooth sailing, and we get to see how they all deal with conflict. Itâs a heart-wrenching journey at times, and I was in tears more than once. You start to realize that, even with all the crazy stuff happening, itâs the bonds of friendship and love that are the most vital.

In the end, âDa 5 Bloodsâ is an eye-opening film, to say the least. The story itself is telling in its own right, but when you compare certain elements to current events, this can be a huge lesson for some viewers. Certain imagery will be too much for viewers to take in, so be wary if youâre squeamish and know that certain things will be stuck in your mind forever. Filled with fantastic performances, backed by superb direction, and focusing on a forgotten (perhaps intentionally buried?) aspect of our history, âDa 5 Bloodsâ is a must-see. ♦