âThe Last Jediâ does not âgo the way you think.â 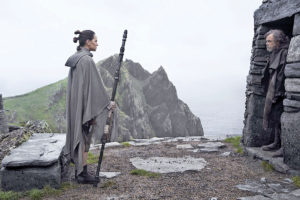 A long time ago in a move theater far, far away, a completely unique and wondrous story was conceived, written and adapted to the silver screen. It was filled with captivating characters, memorable moments and incredible ideas. These werenât actors playing a part; these were fictional characters made real through their off-screen counterparts.
The subject of the âStar Warsâ franchise is about as polarizing as the movies. No other franchise means quite so much to so many. So when an installment defies expectations in any way â expectations that were stars high â it was inevitable there would be a fallout. And they made their voices known across social media.

On the one hand, there are diehard fans giving it low ratings who (to sum it up) believe âThe Last Jedi,â its director Rian Johnson and film studio Disney have betrayed everything they have held dear for the past 40 years.

On the other, there are those who applaud the film’s action and tone as well as its attempts to break with âStar Warsâ tradition, taking the franchise into new territory. A comedic scene involving Poe Dameron (Oscar Isaac) and General Hux (Domhnall Gleeson) is simultaneously strange as it is humorous. Itâs moments like these where Disneyâs influence is clear, and jokes and gags directed toward a younger audience isnât so much natural as it is intentional. Make no mistake, âStar Warsâ was always directed toward an audience of teens and kids that just so happened to strike a chord with fans of all ages.

Nowhere is this aim at a younger audience more apparent than in the porgs. Like the Ewokâs in âReturn of the Jedi,â porgs are cute characters whose sole purpose is to sell merchandise. These cliff-dwelling bird-mammals arenât as intelligent as Ewoks, but what they lack in intelligence they make up for in adorableness.

Perhaps the best way to sum up this movie is to use Luke Skywalkerâs own words: âThis is not going to go the way you think.â The Last Jedi delivers everything you want from a âStar Warsâ movie â fierce âlaser swordâ action, space dogfights, exotic creatures â but layers it with story twists and an emotional wallop that you likely didnât expect.

Clearly modeled after âEmpire Strikes Backâ in the same way âThe Force Awakensâ was modeled after the original âStar Wars,â âThe Last Jediâ aims high and delivers a fun flick that plays to both nostalgia of the original series and attempts to add to the already massive universe.

Like âEmpire,â this chronicles a disastrous period for the Resistance because penultimate episodes must take us to the brink of disaster before a valiant rally in the final chapter. All the heroesâ plans fail â which means Finn (John Boyega) and Rose Tico (new face Kelly Marie Tran) spend most of the film staring down an unavoidable fate thatâs to leave them broken and without hope.

But whatâs this movie ultimately about? So far, I have done my best to keep this review spoiler free, but in some respects that simply might not be possible. But here it goes: Following from the events of âThe Force Awakens,â we find Rey (Daisy Ridley) attempting to bring Luke Skywalker (Mark Hamill) out of hiding to help the battle against the vicious First Order. But Skywalker does not seek to return, as his own past has defined him â a legend he can never truly become â as he insists on staying in the dark and avoiding his connect with the Force. Meanwhile, General Leia Organa (Carrie Fisher) leads the resistance in escape from the First Order in deep space, where Kylo Ren (Adam Driver) and General Hux won’t rest until they finally destroy them.

A great action film that pays respect to longtime and new fans alike, âThe Last Jediâ has something to awaken the force in fans of all ages. And if you find yourself on the other side of the âStar Warsâ debate, I just have one question for you: Why does other peopleâs enjoyment of something cause you so much distress? ♦