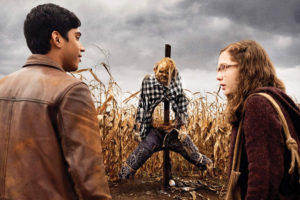 Change is blowing in the wind… but seemingly far removed from the unrest in the cities is the small town of Mill Valley where, for generations, the shadow of the Bellows family has loomed large. It is in their mansion on the edge of town that Sarah, a young girl with horrible secrets, turned her tortured life into a series of scary stories, written in a book that has transcended time. Whether youâre intimately familiar with the storytelling of Alvin Schwartz or not, you are likely familiar with the terrifying illustrations of his collaborator, Stephen Gammell. The creepiness of his line work has been called to many through the pages of the Scholastic Book Fair order forms. Gammellâs illustrations defined what preteen terror looks like. And with Guillermo del Toro as producer, you can rest easy knowing this beloved spooky childrenâs book is in good hands. 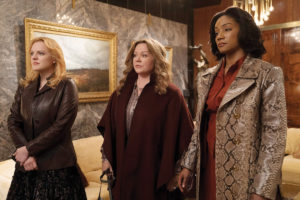 Due to a lack of spandex and capes, you would be forgiven for not immediately realizing this is another movie based on a comic book series. One of the last published titles from the now shuttered Vertigo comic book series from DC Entertainment, the film stars Oscar nominee Melissa McCarthy, Tiffany Haddish and Elisabeth Moss as three 1978 Hellâs Kitchen housewives whose mobster husbands are sent to prison by the FBI. The ladies struggle to get by financially but soon figure out how to use their particular talents to succeed. McCarthy portrays Kathy, an adoring mother who leads the charge for the women to take over the business. Haddish is played by Ruby OâCarroll, a woman willing to kill anyone who gets in her way. Moss plays the role of Claire Walsh, a timid wife of an abusive husband who eventually starts to fall in love with the violence that starts to take over her life. Left with little but a sharp axe to grind, the ladies take the Irish mafiaâs matters into their own hands. 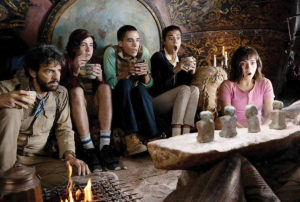 Having spent most of her life exploring the jungle with her parents, nothing could prepare Dora (Isabela Moner) for her most dangerous adventure ever: high school. Always the explorer, Dora quickly finds herself leading Boots (Danny Trejo), Diego (Jeffrey Wahlberg), a mysterious jungle inhabitant, and a ragtag group of teens on a live-action adventure to save her parents and solve the impossible mystery behind a lost Inca civilization. Fun fact: This is the first Nick Jr. film to be rated PG. ♦