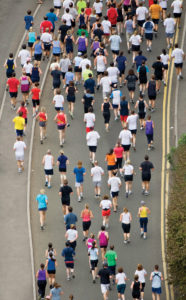 Jamie Seitz remembers the first year she and her husband read signs that their neighborhood would be shut down for the IMT Des Moines Marathon. Driveways would be inaccessible. Vehicles parked in the street would be towed.

âWe were like, âReally? Does that really happen?â â recalls Seitz, who moved to the Ingersoll Park Neighborhood five years ago. âOur first thought was, âCan you really shut down the neighborhood?â We didnât really understand.â

It wasnât until the Seitzes crept out onto their front porch the morning of race day that they understood.

âWe came out in our pajamas with coffee and sat on our porch and cheered them on,â Seitz says. âItâs one thing when you see a small race, â¦ but with the marathon, itâs thousands of runners. Weâre at mile 8, so this isnât a small
feat. You see these people, youâre just like, âGo!â

Since that first year, the Seitzes have been active volunteers and supporters of the IMT Des Moines Marathon. They volunteer at the water station. They cheer on runners. One of their daughters, Jolie, sings and plays her guitar. 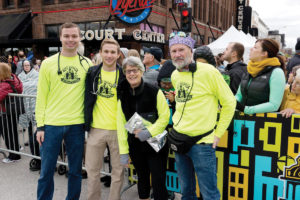 The IMT Des Moines Marathon, which will take place Oct. 21, affects thousands of households as 8,000 runners wind their way through numerous neighborhoods. The course flows out from downtown, through the hills south of Grand Avenue, winding its way eventually to the blue oval at Drake University before heading south, through the woods of Water Works Park, and then finishing up downtown again.

But the marathon affects the Des Moines metro in a much larger way: The 2017 marathon brought $1.8 million to the Des Moines economy, according to Catch Des Moines, the Greater Des Moines Convention and Visitors Bureau and the Des Moines Area Sports Commission. The economic impact calculation takes into account the number of overnight stays, same-day attendees and other factors to estimate the number of direct business sales for lodging, transportation, food and beverage, retail, recreation and other services that visitors might utilize. 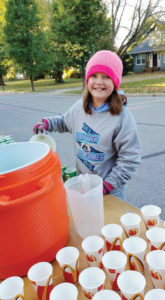 Ella Seitz volunteers at the water station at the IMT Des Moines Marathon. Members of the Ingersoll Park Neighborhood rally together to cheer on and support runners. Photo submitted

âThe IMT Des Moines Marathon has been a staple in Greater Des Moines for 17 years,â says Katie Fencl, vice president of sales, sports and services at Catch Des Moines. âOn top of the phenomenal downtown Des Moines backdrop, the marathon is a progressive event â constantly striving to provide a better athlete experience,
create new partnerships with races in neighboring states and designing all new races that allow a wider variety of
visitors and residents to participate.â

Other cities want to emulate the IMT Des Moines Marathon model, Fencl says, which has brought visitors to the Des Moines area who may not have come otherwise. These people are now here every year for race weekend, she says.

Race volunteer Erin Quint says the marathon gives people a chance to see a greater variety of places in Des Moines than if someone were to only come for a visit.

âSome people have stereotypes of Iowa and the Des Moines community,â she says, adding many think Iowa is only a farming state with cornfields. âI think it sheds some of that when people come here and see Iowa and how great Des Moines and our people are.â

Chris Burch, the director of racing and events for the marathon, estimates the marathon, which is a Boston Marathon qualifying race, contributes another $200,000 to the Des Moines economy with the money it spends to put on the race.

The race supports more than 20 charities and nonprofit organizations, including Shoes That Fit and the Special Olympics, Burch says. 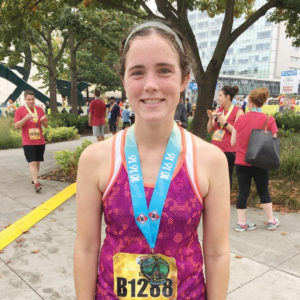 Erin Quint says the IMT Des Moines Marathon gives people a chance to see a greater variety of places in Des Moines than if someone were to only come for a visit. Photo submitted

There have been few complaints through the years about the marathon, Burch says. Mostly, Des Moines residents have embraced the event as a large community celebration that is part of central Iowaâs fabric.

âItâs a 26-mile parade on a Sunday morning, so there are going to be issues,â he says. âMost of them can be avoided through communication prior to the race, as there is typically more than one way to get from point A to point B. We try to minimize delays and find alternate routes.â

Ingersoll Park has a lot of young families. Even if residents arenât volunteering with the water station, theyâll sit on their porches or in their yards with signs and cheer. They mill around with coffee, doughnuts and other treats that they bring to those who are working at the water station.

âEverybody helps in their own way,â Seitz says. âItâs one of those things that everyone pitches in.â

David Courard-Hauri lives in the Drake Neighborhood and has volunteered at the neighborhoodâs water station several times.

âItâs a fun time to get together as a neighborhood and enjoy cheering on the runners and helping out,â he says.
The neighborhood plays host to the runners for the stretch between miles 10 and 12. During this leg of the race, runners pass through the residential area and onto Drake Universityâs campus for a loop around Drake Stadiumâs blue oval. Music from the neighborhood helps keep the runners energized, and the college students bring a younger, enthusiastic vibe to the celebration, Courard-Hauri says.

âItâs kind of like a big party around that part of the marathon,â he says.

Courard-Hauri has run the race in the past and will again this year. He says the crowd makes the race for the runners.

âIt completely changes everything,â he explains. âYouâre kind of used to plugging in your headphones if youâre running a long distance. This kind of race would be pretty monotonous without all of the people aroundâ¦ It gives it a real party atmosphere to have all of the people around and the music while youâre going. It makes it feel like an exciting event rather than a just really long race.â

Throughout the race course, residents and other community members come together â the marathon pays for all entertainment â to provide more than 50 forms of entertainment on the course. This includes individual musicians, such as Jolie Seitz, to DJs and rock bands to cheer squads and high school performers to volunteer groups and sponsoring organizations that put on some form of entertainment.

âWe happen to be an event that invites people to actively participate in it,â Burch says. âItâs not so much like an evening at the Iowa Cubs where youâre watching others. Itâs an event you can participate in whether youâre running or walking or fundraising or wanting to come out and support the runners. Any of those things. It brings everyone together. It really is a rolling parade, and it impacts the community, as well.â 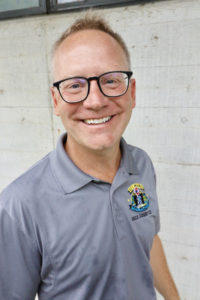 Chris Burch, the director of racing and events for the IMT Des Moines Marathon. Photo submitted

More than 1,500 people volunteer to help with the marathon each year. Itâs one of the most critical components â in addition to acquiring the proper city permits â of putting on a race of the magnitude of the marathon, Burch says.

About 600 of those volunteers assist on race day at the dozens of water stations or on the course, and more than 500 help at the sport and fitness expo in the days leading up to race day.

Residents can create cheer stations to encourage runners. These can include signs, noisemakers, music and other fun activities.

âSometimes, it can be just as fun to come out to the end of the driveway and cheer on the athletes,â Burch says. âI have seen many different things on the course, and I can tell you from experience that they donât go unnoticed by the athletes.â

Volunteers assist residents on the route and answer questions they may have. Residents can ask any volunteer, but those with âAmbassadorâ written on their shirts are more knowledgeable about race details, says Cindi Benevento, who oversees the marathonâs ambassador program.

Ambassadors are individuals who volunteer above and beyond on a continual basis. These individuals also receive extra training and can likely answer more questions residents may have.

âWe know a lot of things about the race,â Benevento says. âIf anybody comes up and asks something about the race, we can probably answer it.â

Ambassadors help racers on race day, but they also help spectators figure out the best places to watch the
marathon and cheer, decide where to eat, and share information about race start times.

Anyone who wants to volunteer can do so through the IMT Des Moines Marathon website â www.desmoinesmarathon.com â on the Volunteer page under the Community tab. ♦

Learn how to be a good cheerleader

There are multiple races during marathon weekend where bystanders are encouraged to cheer on racers: