A history lesson and photographic feature on iconic local bridges

Cross a few of our cityâs many pedestrian bridges and tour the unique backgrounds of these hidden (and some not-so-hidden) gems. From recognizing influential citizens to marking moments of history, these bridges have stories to tell and are beauties to behold. Read along and discover a new perspective on Des Moines sights. 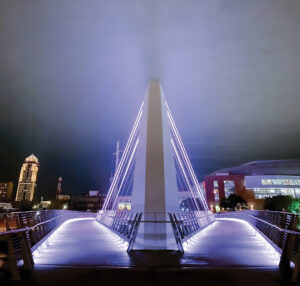 The iconic arches of the Iowa Women of Achievement Bridge are located at the northern edge of Principal Riverwalk Loop in downtown Des Moines. Simply known as the Center Street Pedestrian Bridge when constructed in 2010, it received its new name in 2013, when Principal Financial Group gifted the $10 million bridge to the City. The bridge splits into two pathways, with color-changing LEDs lighting the middle connecting path, where a plaque recognizes prominent Iowa women. Names are added each year by Women Lead Change. 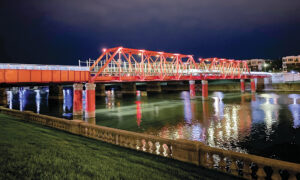 Anchoring the south end of the Principal Riverwalk is the Union Railway Bridge, also known as the Red Bridge, dating back to 1891. It was restored to its current beauty in 2006, its original silver color replaced with its now-iconic red and cantilever lookout areas added for sightseeing and fishing. It was raised 4.5 feet in 2017 due to increased flood risks. 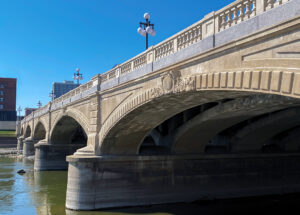 Spanning 496 feet across the Des Moines River, the Court Avenue Bridge opened in July 1917. To its north are three similar concrete arch bridges at Walnut Street (1907), Locust Street (1911) and Grand Avenue (1918); however, the bridge at Court Avenue was the only one to preserve its original ornamentation. It underwent rehabilitation in 1982, with globe streetlamps added in 1986. It was listed on the National Register of Historic Places in 1998. 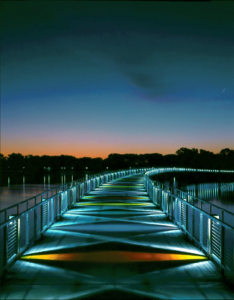 Visitors can enjoy the Des Moines skyline while escaping the downtown hustle and bustle via the Grayâs Lake Bridge. The city park opened in 2001 thanks to the vision of David and Elizabeth Kruidenier. The 2-mile Kruidenier Trail loops around the lake, highlighted by a 1,400-foot pedestrian bridge crossing over the water. A kaleidoscope of lights illuminates the wide pathway, reflected off multicolored dichroic glass panels. 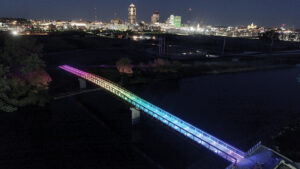 The Coleman Bridge crosses the Raccoon River and connects the Grayâs Station neighborhood with Grayâs Lake and Water Works Park. Named after a former Des Moines city councilmember and his wife â Chris and Marcie Coleman â this colorful 425-foot-long bridge was constructed in 2019. 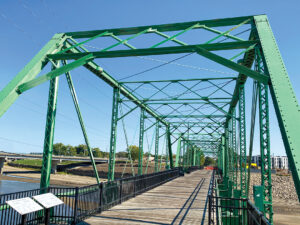 Built in 1898 and spanning the Raccoon River downtown, the Jackson Street Bridge is also known as the Southwest Fifth Street Bridge, the Green Bridge and the Jackson Avenue Bridge. The bridge closed in 2013 after a long and battle-filled history (see CITYVIEWâs story from June 2015, âSaving a Bridgeâ). Concerned citizens formed the Friends of Jackson Bridge, spearheaded by former city councilmember Carl Voss, and raised $2.3 million to save the structure. It reopened in 2016 as part of the Meredith Trail. 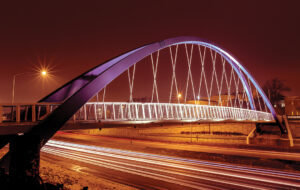 Dedicated in April 2006, the Rider Way Pedestrian Bridge crosses Interstate 235 near 44th Street and is one of three such bridges. It connects the neighborhood south of the interstate with Roosevelt High School and northern neighborhoods. The Iowa Department of Transportation sponsored a bridge-naming contest, with the winning name reflecting Rooseveltâs motto: âRespect and Responsibility – Itâs the Rider Way.â ♦

BASS POINT CREEK HIGH BRIDGE
Not for pedestrians, but the historic Boone & Scenic Valley Railroad allows visitors to traverse this 156-foot-tall bridge via train or motorcar.

BRIDGES OF MADISON COUNTY
Including six historic covered bridges featured in the best-selling novel and film of the same name.

TRESTLE TO TRESTLE BRIDGE
Reopened after three years, this long-awaited bridge (which also lights up at night) crosses Beaver Creek to connect Johnston and Des Moines.