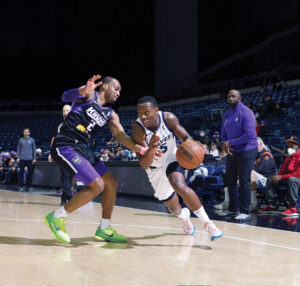 After just missing the NBA G-League playoffs last season with a 15-17 record, the Iowa Wolves are gearing up to start their season this November with better results and a focus on player development.

Leading the charge for the Wolves at the helm is Head Coach Jeff Newton. Newton is entering his second season as head coach. This year, some new faces will populate the lineup in Des Moines. With that new team will come a development philosophy from the entire Wolves organization.

âThe player development piece is probably the most important piece of this program,â Newton said. âWe want to make it a fully immersive, fully ingrained player development program from our strength staff to the training staff, to on the court, even helping them a little bit more than we did last year off the court and mentally.â

For Newton and the staff around him, one of the biggest parts of the job is teaching players professional habits and good work ethic alongside basketball. That focus will be pushed onto a mostly new group of players this year for Iowa. 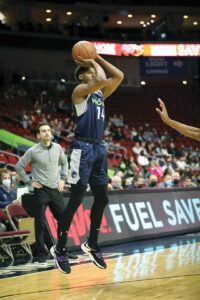 Matt Lewis (No. 14) returns to the Iowa Wolves after playing in 32 games last season, averaging 11.1 points, 4.3 rebounds and 2.5 assists per game. Photo courtesy of the Iowa Wolves

Some players who signed with the Minnesota Timberwolves on two-way contracts may play on the Iowa team at some point this season, but most of the team will consist of players who were waived by Minnesota.

These players include Emmanuel Mudiay, Matt Lewis, Phillip Wheeler, PJ Dozier and CJ Elleby. The most notable name on that list is Emmanuel Mudiay. Mudiay is a former No. 7 overall pick in the NBA Draft in 2015 after playing a season of professional ball for the Guangdong Southern Tigers in China. Mudiay came out of the draft as a stat sheet-stuffing point guard, with a 3-point shot that needed some work. After six years in the NBA, his 3-pointers have improved a bit, and he has averaged 10.9 points per game in his NBA career so far.

âA really tough dude. He brings an edge to the game, and he looks good, and heâs bought in. Iâm excited about him,â Newton said.

Iowa will also benefit from having Dozier on the team. After two years at South Carolina, the latter of which he helped take the 7-seeded Gamecocks to the final four, Dozier entered the 2017 draft and went undrafted. After stints in the NBA, Dozier carved himself out a role with the Denver Nuggets before tearing his ACL and requiring season-ending surgery. He will start in Iowa this season, and the 6-foot 6-inch guard will bring size and scoring to Iowaâs roster.

Dozierâs strength comes from his defense, where he provides an ability to guard multiple positions, giving switch advantages to his team. His length helps with that, and heâs graded well in defensive ratings like FiveThirtyEightâs Robust Algorithm using Player Tracking and On/Off Ratings (RAPTOR) model and, to a lesser extent, basketball referencesâ defensive box plus/minus. Offensively, his shooting could use some work, where his 31.9% career 3-point benchmark doesnât jump off the page. He will be an intriguing player for a deep Iowa Wolves squad. 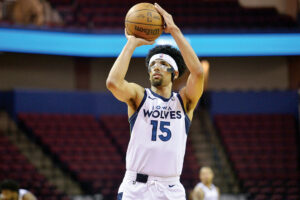 Brian Bowen II (No. 15) was a key player in last yearâs Iowa Wolves team. Photo courtesy of the Iowa Wolves

âComing back from a torn ACL, he looks really good. I mean, heâs an NBA player,â Newton said. âHeâs a big guard who defends, and he can make plays, and heâs just enjoyable to be around.â

Lewis, Wheeler and Elleby are the other big names, with Lewis being the most well-known. A four-year starter at James Madison, Lewis took a 6-foot 5-inch frame and a solid shooting stroke to the Iowa Wolves last year and was one of the teamâs greatest contributors. He played in 32 games, averaging 11.1 points, 4.3 rebounds and 2.5 assists per game. He also was an excellent 3-point shooter, knocking down 39.2% of attempts with 5.7 attempts per game. Newton also noted his good summer league performance, which has the 23-year-old set up for another solid year.

âHeâs a guy who will fit in pretty easily and build upon it,â Newton said. âComing into last year, he wasnât fully healthy. Heâs been able to get healthy, finished the season really strong, and had a really good summer league with Minnesota. So heâs kind of been a guy thatâs been on this track thatâs grown within the organization.â 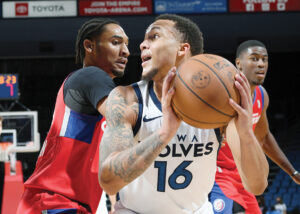 Wheeler is more of an unknown after going undrafted in the 2022 draft. He brings 6-foot 9-inch size to Iowa after playing for the Piratas de Quebradillas in Puerto Rico. Wheeler has also spent a couple seasons in the G-League. With him in the front court is CJ Elleby, who played in 58 games, starting 28 of them, for the Portland Trail Blazers in the 2021-22 season. Elleby was the 46th overall pick in the 2020 NBA Draft and made his debut after an excellent second year in college. Elleby is a 6-foot 6-inch small forward who fared well in the Pac-12, scoring 18.4 points per game. Ellebyâs drafted status and his time in the NBA adds another promising young talent to the Wolvesâ roster.

âA guy like Phillip Wheeler, tremendous upside, heâs young, heâs super athletic,â Newton said. âThen CJ Elleby, and heâs got a body and size and some skill as well. I think weâve got a good group with a good mindset right now.â

Perhaps the biggest name that could be seen in an Iowa Wolves uniform this season, however, is Luka Garza. The former Iowa Hawkeye center was dominant in college, winning multiple awards including two consensus first-team All-American awards and the John R. Wooden award handed out to the NCAA menâs basketball player of the year. The 23-year-old averaged 24.1 points, 8.7 rebounds and 1.6 blocks per game in his senior season at Iowa, while shooting a blistering 44% on 3-pointers. His first year in the G-League saw him average 20.6 points and 9.5 rebounds per game while playing for the Detroit Pistons in the NBA as well. After impressing the Minnesota team, Garza has received a two-way contract, which could see him spend some time in Iowa, though his status is not certain. Garzaâs defensive weaknesses have kept him from carving a spot in an NBA rotation regularly, but a notable weight loss, combined with a good summer league, has him as a potential asset to both Minnesota and Iowa moving forward.

âWe had Luka Garza. He was scheduled to come to Iowa, but he played so well he got one of those two-way contracts,â Newton said. âI was super happy for him, and he looked really good.â

Another player in the mix is Eric Paschall, who has played three years in the NBA and started multiple games in all of those years including 28 for the Golden State Warriors in two years. Paschall is a big-bodied power forward who is a bit short for his position and has had some troubles on the defensive end because of it. Paschall can stretch the floor, shooting a career best 37% from behind the arc last season with the Utah Jazz. The power forward was a starter at Villanova, helping to lead them to a championship in his junior season and earning First-team All-Big East his senior year. His college success led to him being drafted 41st overall in the 2019 NBA Draft. Paschall was waived by the Timberwolves Oct. 19.

Last season, Iowa was led by McKinley Wright IV, Brian Bowen II and Vincent Edwards, but the roster turnover in the G-League is dynamic from year to year with the league being focused mostly on development. With professional basketball back in full swing, the Iowa Wolves are gearing up for a season backed by promise.

âItâs a daily commitment to improving these guys and staying the course,â Newton said. âIn the course of a G-League season, everybodyâs got their ups and downs.â

On the schedule, Iowa opens up the season at Wells Fargo Arena in Des Moines against the Sioux Falls Skyforce. The two teams will play back to back, with Iowa hosting both games to kick off the 2022-23 season on Nov. 5 and Nov. 6. Iowa will head to Hoffman Estates to take on the Windy City Bulls on Nov. 12 and Nov. 13 and will continue the road trip in Cleveland against the Cleveland Charge on Nov. 17.

The team will come back home after that for a game against the Wisconsin Herd on Nov. 20 before heading on another road trip to face the Fort Wayne Mad Ants on Nov. 25, Grand Rapids Gold on Nov. 27, Motor City Cruise on Dec. 2 and then the Mad Ants again on Dec. 5. The Wolves will then host games for the rest of December with the Gold on Dec. 9 and 10, the Cruise on Dec. 12, the Charge on Dec. 15 and the Raptors 905 on Dec. 29 and 31. They will also host the Texas Legends on Jan. 1.

After that is two games against the Salt Lake City Stars without determined locations yet followed by two away games against the South Bay Lakers and the Ontario Clippers on Jan. 9 and Jan. 12, respectively. The Wolves will follow that by hosting the Memphis Hustle on Jan. 15.

Following those games will be another road trip, this time starting with games against the Westchester Knicks on Jan. 22 and 24 and a game against the Long Island Nets on Jan. 25. Iowa will then go on a long home stand, starting with the Oklahoma City Blue on Jan. 27 and 29 followed by the Austin Spurs on Feb. 4 and 5, the Mexico City Capitanes on Feb. 7, the Legends on Feb. 9, the Stockton Kings on Feb. 12 and 13 and the Capitanes again on Feb. 22.

This will take the Wolves into another long road trip beginning with the Lakers on Feb. 25 followed by the G League Ignite on Feb. 27 and 28, the Skyforce on March 3 and 4 and the Rio Grande Valley Vipers on March 9 and 11. Iowa will finish its schedule with the Birmingham Squadron at home on March 13, the Santa Cruz Warriors on the road on March 17 and 18, the Squadron at home on March 22 and the Lakeland Magic at home in Wells Fargo Arena to end the year.

The Iowa Wolves will run many promotions throughout the season including the first game. In a promotion presented by KwikStar, Premiere Night attendees will receive a special Wolves themed T-shirt. Free gift cards to KwikStar will also parachute down during the game. Sunday, Nov. 6 is Marvel Superhero Day. The team will wear customized Black Panther jerseys.

The team will host a couple concert nights on Feb. 4 and Feb. 5, a Country Night Concert and a Faith and Family Concert. Performers will be announced later. On Dec. 31 and Jan. 1, the Wolves will give away winter hats and winter mittens as holiday celebrations. The team will also host a Hoops for Hope cancer awareness game on Nov. 19, a Timberwolves Day game on Jan. 29, an Education Day Game on Feb. 7 and Alphaâs Puppy Bowl on Feb. 12.