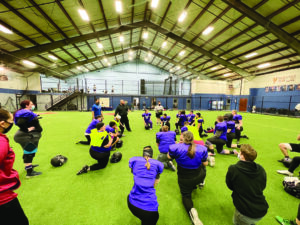 Soon after moving to central Iowa a few years ago, Jennifer Trevillian and best friend Shannon Christensen decided to do something theyâd never done before: attend a hockey game. In this case, it was the Iowa Wild.

After the game ended, the two were walking toward their vehicle when they saw a flyer on the windshield. On it was an invitation to try out for a tackle football team. Looking for something different to do, and to meet new people, they decided to give it a shot. At first, anyway.

Even though Trevillian is a self-admitted âultra-competitive type,â she was a bit unsure if she really wanted to play. That is, until Shannon, in front of Trevillianâs younger sister, said, âItâs OK if you donât want to play.â And, just like that, it was on.

âI hate being challenged like that, especially in front of my baby sister,â she laughed.

The tryout happened, and both women loved it. Things started rolling, and soon the two decided they wanted to give local women an even larger stage on which to play tackle football. A month later, on that day in 2018, the Iowa Phoenix was born.

Last season, the club enjoyed its best season in its three years of existence, finishing with a 5-3 overall record and winning the Womenâs Football Alliance (WFA) Midwest Regional D3 championship after going 2-6 in 2019. The 2020 season was cancelled due to COVID-19.

Playing tackle football in the nationâs largest womenâs tackle football league has certain perks, but pay isnât one of them. Trevillian is working to change that eventually, but, for now, itâs baby steps. Thereâs still the âreal worldâ outside of football that includes paying the bills and going to work five days a week. Trevillianâs âday jobâ is that of a medical CT technician at Iowa Clinic.

âEverything we do comes out of our own pocket,â she said. âAll the women pay for their own equipment and team dues so we can rent fields and pay the refs and our athletic trainers. Itâs a full-time job on top of a full-time job.â 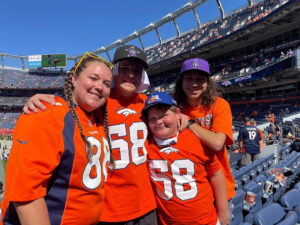 September Dale of Winterset has been a fan of football ever since she played the game for one season when she was 9 years old.

There are 30 players on the Iowa Phoenix roster ranging in age from 19 to 47. To Trevillian, though, age is just a number.

âEverybody is freaked out that theyâre too old to play,â she said. âBut, honestly, itâs just a number when it comes to sports, in my opinion, if you have the determination and the will and the drive. Iâve played with 56-year-olds who can run circles around the 18-year-olds.â

The best description of the Phoenix, she added, came from a friend living in Cedar Rapids who said, âTheyâre the size of high schoolers, with the knowledge of middle schoolers, but have more passion than pro players.â

Most of the women have never played the game before, but the learning curve is surprisingly flat, Trevillian said.

âYouâd be surprised,â she said. âAs players and coaches keep coming back every year, more plays are added, more moves are put in. The women have so much drive that they learn very quickly. Our playbook is impressive, but the rookies are picking it up so quick.â

The WFA game is similar to the collegiate game with regard to the rules, Trevillian said. Safety, she said, is priority No. 1.

âEveryone still has full-time jobs outside of this, so we have to be as safe as we can,â she said. âWe play on Saturdays, practice two or three times per week, but we still have our jobs. A lot of teams have low numbers, and the more games you play, the more injuries start occurring. We ended our season last year with 14 players. We went to the conference championship in Phoenix, Arizona, and I felt like we were held together with duct tape.â 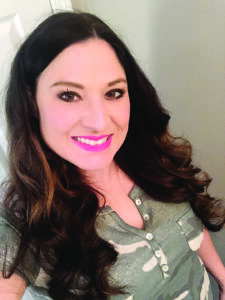 Jill Alesch of Johnston is another newcomer to the Iowa Phoenix this season.

Last season, the Phoenix played its home games at Valley Stadium in West Des Moines, but that locale will likely change this season, Trevillian said.

The crowds have been great thus far and are only getting better, she says.

âPeople love to support teams that are winning, and we were, so our crowds were huge for us,â she said. âBefore it was just family members, but now it could be up to 200 people, and not just the moms and dads of the players.â

Trevillian credits Head Coach Ricky Jimenez-Dragoni with much of the teamâs success.

âHeâs a phenomenal coach. He knows the game in and out,â she said. âHis and assistant coach DeMareo Darrahâs knowledge of the game is phenomenal. The big thing, though, is how they coach us. Women are different than men. You have to coach them differently, and I think theyâve cracked the code on how to get through to women. We are emotional creatures. You canât just scream at us. They take the time to work with everyone and are just amazing.â

September Dale of Winterset played tackle football for one season when she was 9 years old.

âI was tiny and got beat up pretty good by the boys,â she laughed. âIâve always been a little bit of a tomboy, and a lot of my influences back then were male role models. I was raised by a single mom, so we always played football at recess and in the neighborhood. I was always playing sports with the boys in the neighborhood.â

Fast forward a few decades later to the annual John Wayne Days celebration in Winterset. Just prior to the commencement of the parade, Dale and two of her children began throwing a football around in their front yard. Suddenly, a stranger approached her with a suggestion.

âShe told me I should try out for the womenâs semi-pro team in Des Moines,â Dale remembered. âSo I Googled it after the parade, found the Phoenix, and it just happened to be that tryouts were the very next weekend.â 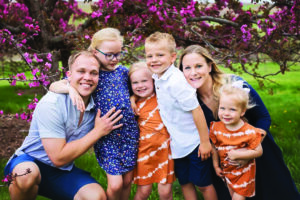 As the mother of three daughters, Crystal Peterson of Urbandale feels itâs important to afford women the same opportunities as men, she said.

A few days later, she was in the parking lot where the tryouts were being held. She sat. And sat. And sat some more. Forty-five minutes of trying to convince herself to go in.

âI was totally nervous, but, since it was in Des Moines, and I had already driven there, I told myself, âYouâre going to get out and do it,â â she said. âAnd the rest is history.â

Crystal Peterson of Urbandale has been on the team since late January after finally taking a friend up on an offer to try tackle football.

âIâm naturally a very competitive person,â Peterson said. âI was a four-sport athlete in high school, played softball in college, and, last year, I got into power lifting. She had been trying for more than a year to get me to try out, and I finally just decided to do it.â

The 34-year-old Peterson said the biggest issue with playing for the Phoenix is staying safe and not getting hurt. Sheâs been taking some snaps at running back on offense, and, on defense, sheâll either play linebacker or safety â all positions with plenty of contact.

âMy body has been covered in bruises since practice started,â she laughed.

But itâs been worth it, she said. And she recommends others try it, too.

âWhat have you got to lose?â she asked. âAs a mom of three daughters, I think itâs really important to give women the same opportunities as men.â

Teammate and Johnston resident Jill Alesch encourages other women to give football a shot as well.

âI think playing football empowers women and encourages them to be strong both on and off the field,â she said. âFootball is both mentally and physically challenging, and it teaches people how to work together as a unit. I encourage other women to get involved. Not every woman wants to play, but not every man does either. I think the biggest barrier for other women joining isnât a lack of interest but rather a lack of confidence that they can learn the game later in life.â

The Phoenix open the 2022 season on April 9 with a road game against the Minnesota Vixen. Iowaâs home opener is set for April 16 when theyâll host the Nebraska Valkyries. ♦