Whatâs in your garage?

From pristine to cobweb-laden, from tidy to cluttered, from showroom to workshop, area garages run the gamut. But one thing they often have in common is that, somewhere inside â besides a family vehicle â one can find a personal treasure with a unique story behind it. 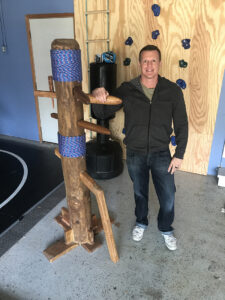 One of the unique things in Ryan Hanssenâs garage is a Wing Chun martial arts dummy.

Ryan Hanssenâs Johnston garage is much more than just a garage. Itâs a workout haven. Sure, it has the typical machines and equipment â  a stand-up striking bag, a rope ladder, wrestling mats, a power rack with weights and a gymnastics bar, to name a few â but it also has some less-expected features such as a rock climbing wall.

The centerpiece, however, is a handcrafted wooden Wing Chun martial arts dummy.

Wing Chun came on the American radar decades ago with martial arts expert Bruce Lee, who was a Wing Chun practitioner at the time. The device is helpful in training strikes, blocking, deflecting punches, and other techniques. A friend of Hanssenâs constructed it all from local wood, first letting the main piece dry for a few months, then adding the âarms.â He used only pegs and notches. Not a screw or bolt can be found in this unique garage find.

The project took about six months, says Hanssen, a detective in the Johnston Police Department.

âHe hadnât made one before, so I sent him some pictures. He looked them up and wanted to stay as traditional as possible.â

Hanssenâs love of the Wing Chun was born out of an injury to his shoulder.

âI found out that if I turned my wrist over during the right punch, my power punch, the way youâre supposed to, it really flared up my shoulder,â he says. âSo I was looking at things, and with Wing Chun, you throw your punches with your fist straight up and down instead of turning it over in boxing style. So now I can punch without wanting to cry.â

A reminder about quality 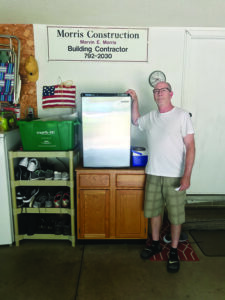 Mark Morrisâ Grimes garage is about as neat as a garage can get. Itâs tidy, well-kept and nondescript. Itâs no surprise, then, that one of the âdecorationsâ on his wall is a simple black-and-white, rectangular sign that reads âMorris Construction.â

But thereâs more to the sign than meets the eye. At least to Mark. When he looks at it, he sees his dad, Marvin, a building contractor in Newton for 30 years before retiring.

Mark and his two brothers, Shane and Mike, worked for their dad during the summers while growing up. Although they eventually decided against following in their dadâs carpentry footsteps, plenty of positives were gained under his tutelage during those formative years.

A number of lessons were learned in those days, and a childhood of memories were gathered â like the time they all came tumbling down when their scaffolding came apart.

âWe were working on a two-story home one time, and the plank came down, hit my dad, and knocked him out cold,â Mark says. âWe boys, we all came down and landed and didnât get hurt, but it hit him right on the head.â

Another time, Mark stepped on a slippery roll of flashing on a garage roof, which caused him to ski down and off the edge of the building, head first.

âLuckily, when I hit the ground, I rolled and didnât get hurt,â he laughs.

Tumbles aside, the impact his dad left on Mark is a profound one.

âHe had a great work ethic and was known as a quality builder,â Mark says proudly. âIt wasnât about starting early or working late.â

On target for fun 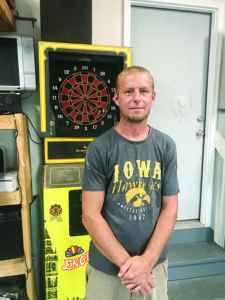 Aaron Hilgenberg gets together with friends in his garage for some friendly games of darts every now and then.

Aaron Hilgenbergâs Waukee garage isnât anything out of the ordinary until you look to the back, right by the entrance door, and see a yellow machine standing there.

Upon closer inspection, one sees itâs his prized dartboard. The long-time âthrowerâ had wanted his own machine and looked far and wide for one.

âI was looking for a stand-up dart board for a long time,â he says. âI donât play very well on the ones that hang on the wall. I donât know why. It must just be the look of it.â

Four years ago, a friend of his said he had one that might fit the bill, and, because one of the numbers didnât work, told Hilgenberg he could have it for free.

The yellow stand-up machine has a permanent home in Hilgenbergâs garage now after he cleaned it up, fixed some parts, and got it looking nearly as good as when it first rolled out onto a bar floor in the early 1980s.

The board serves as an impetus for Hilgenberg and his friends to get together on weekends and have some fun these days. Years ago, playing was a weekly thing. Back in those days, heâd compete in a tournament locally nearly every Saturday. Granted, it wasnât a professional circuit, but still, heâd have a lot of fun.

But Hilgenberg doesnât have to hit the bar dart circuit anymore. He just takes a few steps into his garage.

When his garage board runs its course, as all electronic devices do at some point, Hilgenberg says heâll be in line for an upgrade to a board that has a lot more games.

But for now, as long at his board has his favorite game â cricket â heâs good to go.

On a quest to defeat pests 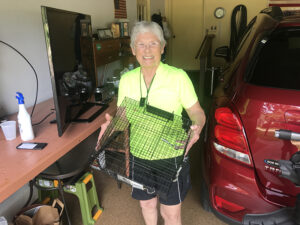 Sharon Mikulan stores a live trap in her garage. She uses it to catch ground squirrels that have been digging up her landscaping.

Among the normal âtrappingsâ of a garage, Sharon Mikulan has something that, shall we say, âcapturesâ oneâs attention â not to mention critters. A live trap is one of an assortment of devices Mikulan has used often on her long-time quest to rid her yard of the pesky ground squirrels and other rodents that seem to be attracted to her Polk City home like flies to honey.

Sheâs tried to be nice. But now, the gloves are off.

Having one or two critters scurry around in the front or back yard on occasion is tolerable to her as long as they donât damage anything. Fair is fair. Animals have places to go, too.

But, over the years, when those places became holes under and around her home, and the edge of her house became unsightly mounds of dirt, Mikulan had to draw a line.

First it was kill traps that she stored in her garage. No luck there. Then it was live traps. Better. Once trapped, the rodents were placed in the back of her car and driven to Big Creek State Park where they were released.

But the animals got smart. They figured it out.

âNo matter where I put it, they managed to get the food and never get caught anymore,â she says.

On to Plan B. An âelectrifyingâ plan, if nothing else.

A friend gave Mikulan a Rat Zapper, a rectangular hard plastic box with an entrance door on one end, designed specifically to take care of business once and for all. Upon entrance of said door, the critters are promptly sent to rodent heaven thanks to a strong jolt of electricity. Although it wasnât her preferred method of taking care of the situation, by now, Mikulan was at witâs end. Something needed to be done. And fast.

So, befuddled by the crittersâ deviant actions with her live trap, out came the Rat Zapper. Mikulan bought new batteries for it and set it outside her patio door on a landing one afternoon. And then she waited. This was going to work, she hoped.

What she saw the next morning, well, shocked her â pun intended.

âThe batteries were everywhere, the unit was turned over and apart,â she says. âA raccoon must have gotten it.â

Ah, yes, raccoons. Mikulan is very familiar with them, too, unfortunately.

âYears ago, I trapped a live raccoon in the house,â she says. âThey kept knocking over my bird feeders and stealing the food.â

After a call to City Hall, a live trap was given to her to use.

âI put tuna fish in there, I think it was,â she remembers of the bait. âBut I set it out too soon. I caught a squirrel. I learned you canât set it out until dusk or later.â

Once she did that, Mikulan began seeing results. Sheâd âbagâ a raccoon, call the city, and theyâd come and get it. Big ones, little ones, and everything in between.

But instead of deterring other raccoons, it only seemed to entice them. So Mikulan kept on trapping. And trapping, And trapping.

âI lost track at 13,â she laughs. âIt was getting boring.â

Last season, she quit counting at 23 ground squirrels caught. Her frustration level at seeing her ground dug up is understandably high. Sheâs trying to be humane with the critters, but they arenât returning any of the favors. Theyâre there. Just like they have been since 1989 when she and her husband, Ray, moved to the home. Unless someone comes up with a magic solution, the critters may be there to stay. But so, too, will Mikulan. Sheâs not about to give up until they get the message.

âWell, theyâve forced me into it,â she laughs.

Broken nose and all 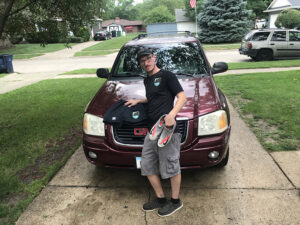 Eddie Winger stores his rugby gear in the garage after each workout or game.

One wouldnât be too hard pressed to find plenty of sporting equipment in area garages. Baseball bats, tennis rackets, football cleats, fishing poles. But one would have to do a little searching to find a collection of rugby equipment.

Letâs be honest. Rugby has yet to become a common sport here in Iowa. Itâs gaining ground, but thereâs a ways to go.

If the sport does become as common as baseball, it will be because of people like Urbandaleâs Eddie Winger.

Winger became involved in the sport in high school his junior year. He joined a rugby club nine years ago. He liked bonding with his teammates. It was different on that level. And, of course, you get to hit people.

âThere arenât any pads, and itâs physical, and thereâs a lot more running than most sports,â he says.

The 27-year-old Winger would know, having been a member of the football, wrestling and baseball teams at Urbandale High School until his graduation in 2012.

Once he started playing rugby, he was hooked. Winger plays for the West Des Moines Wombats.

âIâm always there,â he says. Broken noses and all.

âYeah, I broke it two weeks ago,â he adds. âOut of nowhere, I was rucking over another player, and I just got kicked in the face. There was a lot of blood.â

Winger walked off the field and eventually got the bleeding to stop. As soon as that happened, it was right back on the field â only to have it bust open again.

âThatâs when I called it quits for that day,â he jokes.

Naturally, a sweaty sport such as rugby, complete with soccer cleats and âthe shortest shorts you can imagine,â lends itself to having some odiferous equipment. Thatâs where the garage comes in. Winger stores it there, so as to not offend the entire house.

As to his future in the sport, Winger is determined to continue, busted sniffers and all.

âI plan on playing until I canât no more,â he says.

As these stories demonstrate, often the most interesting find in a garage isnât the car parked there. From Dadâs old lunch box to taxidermy treasures, a little bit of digging can uncover a trove of cherished keepsakes and stories to be told. Now, whatâs in your garage? ♦

Tammy Pearson contributed to this article.