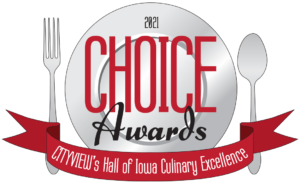 This yearâs class reinvigorates venerability. All these people and institutions are long overdue for honoring.

The idea for the CHOICE awards originated seven years ago and was inspired by Japanâs Living National Treasures. That program honors âpreservers of important intangible cultural properties.â In the years after World War II, anxiety arose in Japan that their unique cultural traditions (noh, kabuki, origami, kumi, sumo, teapot ceramics, noodle making, etc.) might be swamped by the conquering Western culture. By honoring revered masters of these arts, they saved them and made them important to a new generation.

Our original intention at CITYVIEW was to do something similar for Iowaâs venerable, living food pioneers. That evolved into a veritable hall of fame for people and food institutions that gave our city and state a singular quality and identity. CITYVIEWâs Hall of Iowa Culinary Excellence (CHOICE) awards began at a time when locals rued the passing of two of the most memorable food icons in Iowa history. The Younkers Tea Room was lost in a fire, and Dahlâs stores were sold or closed.

For the charter edition of the awards, we focused on venerability â enduring traditions and pioneers who were still alive. The Japanese word âsabiâ refers to a kind of beauty that is attained by aging, when an objectâs elegance is evidenced by a changing patina. The word is most often applied to tea pots whose glaze has been changed by decades and even centuries of having tea intentionally poured over the top to drip down over the pot. In that spirit, our charter members in 2015 all had histories dating back to at least the mid-20th century. Several topped more than a century of service to central Iowa. The following yearâs class of honorable food pioneers was younger, but all blazed new trails that influenced the culinary scene of Des Moines in unique ways. Since then, we have expanded upon both categories of excellence.

This yearâs class reinvigorates venerability. All these people and institutions are long overdue for honoring. A couple of them are probably taken for granted, until one thinks about how much they added texture to Des Moinesâ culture. 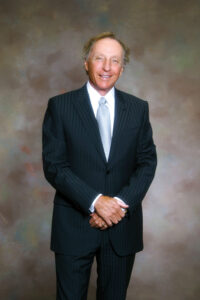 The story of Hy-Vee mirrors the story of Iowa over the last 104 years. Like William Faulknerâs great trilogy, it has progressed from a hamlet to a town to a regional superpower. The original Hy-Vee began in Beaconsfield, Iowa, a place of 15 today that is tied with LeRoy as the smallest incorporated town in Iowa. The store was then called Supply and was an offshoot of companies owned by Charles Hyde and David Vredenburg (the Hy and the V). Between the two, Hyde and Vredenburg owned, or partnered in, 15 different stores in 1938 when an Iowa law that heavily taxed chain stores was ruled unconstitutional. All of Hydeâs and Vredenburgâs independently owned stores were then brought into their partnership. The company was headquartered in Lamoni, the largest town in their region. The new companyâs management plan involved autonomy for store managers, setting the stage for its eventual employee ownership. In 1945, Hyde & Vredenburg moved its corporate headquarters from Lamoni to Chariton, after acquiring the Chariton Wholesale Company.

The Hy-Vee name was adopted in 1952 as the winning entry of an employee contest. The first store with that name opened in 1953 in Fairfield. In 1956, Hy-Vee introduced its first private label products, along with a new logo. In 1960, the company became employee-owned by the Employeesâ Trust Fund. The slogan âWhere Thereâs a Helpful Smile in Every Aisleâ was first used in a TV commercial in 1963. In 1969, Hy-Vee expanded into Minnesota, after acquiring the Swanson Stores chain based in Cherokee. In 1969, Hy-Vee opened its first Drug Town, a pharmacy separate from a regular store. Hy-Vee had 66 stores at the end of 1969. They expanded into South Dakota, Nebraska and Illinois in the 1970s.

The chain truly took off during the leadership of Ron Pearson, who was president from 1983 till 2001 and chairman of the board through 2006. The company grew exponentially during that time. The corporate headquarters moved from Chariton to West Des Moines in 1995, and Pearson grew its brand, particularly in Kansas City, with prominent sponsorships of both professional and college sports. The companyâs major distribution centers remain in Chariton and Cherokee to this day. That illustrates growth without outgrowing oneâs roots, something that employee ownership certainly influences. 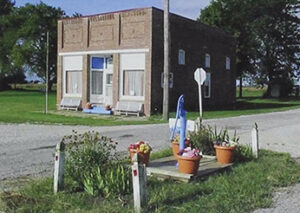 Drug Town stores were renamed Hy-Vee Drugstores in 2005. Hy-Vee was selected as Progressive Grocerâs Retailer of the Year in 2003. In fiscal year 2009, Hy-Vee had sales exceeding $6.3 billion, making it the second-largest employee-owned company in the United States and ranked by Forbes magazine as the 48th-largest privately owned company in the country. More than 55,000 employees worked in the Hy-Vee family in 2009. Last decade they moved into the Twin Cities and gobbled market share quickly.

In 2017, Hy-Vee became the exclusive retailer in its service area for sports nutrition products marketed by Mark Wahlberger. This expanded into a deal making Hy-Vee a franchisee for Wahlburgers restaurants. Hy-Vee plans to operate 26 such locations, making it the largest franchisee of Wahlburgers. Hy-Veeâs own restaurant, Market Grille, added Wahlburgers items to its menu.

In 2018, the first-ever Hy-Vee Dollar Fresh store opened up in Osceola. This concept offered customers in smaller communities a fresh, new product selection at low prices. They find a full selection of grocery items, a bakery section with a range of fresh-baked items, a dollar section, a Wall of Value, ready-to-eat meal offerings and other services. Around the same time, they began opening upscale urban stores, like the Court Avenue one in Des Moines, and also their first Fast & Fresh convenience store in Davenport, with sushi, craft beer and woodfired pizza. Hy-Vee agreed to acquire six former Shopko locations in Iowa that will re-open under the Dollar Fresh brand by late summer.  They also bought four QT convenience stores in greater Des Moines. As of 2018, Hy-Vee Inc. has more than 84,000 employees. It has annual sales of more than $10 billion.

And as aggressive as they become, they remain loyal to their hamlet-sized roots. 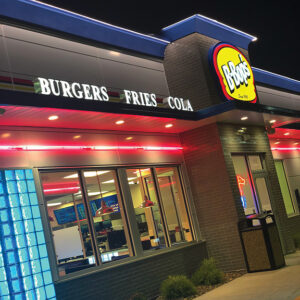 Neon beckons customers to B-Bopâs like the Las Vegas Strip attracts gamblers to the desert. Photo courtesy of B-Bopâs.

The perennial CITYVIEW readersâ choice for best local burger, B-Bopâs is a local chain of 11 stores, all in central Iowa. Founder Bob Johnson, originally from Joliet, Illinois, began his career in the fast food industry with Mr. Quick in Bollingbrook, Illinois, in 1970 as an assistant manager, a position he held for eight months. Impressed with Johnsonâs ambition, that company offered him an opportunity to become a franchise partner. In 1973 Johnson accepted the offer, moved to Newton and opened a Mr. Quick. He later opened stores in Fairfield and Muscatine. In 1983, Johnson and his partners changed the restaurant name from Mr. Quick to Sizzlinâ Sams.

In 1986 Johnson became familiar with the double drive-through concept he observed in Las Vegas at In & Out Burger and particularly at Zipâs in Missouri. Those were popping in the sunbelt states. In 1988, Johnson noticed a building located at 1500 East Euclid in Des Moines. Within six months, the first B-Bopâs was opened on that spot looking much as it does today with beckoning pink neon and a giant yellow oval logo.

The company now has expanded its original concept to include indoor dining, with checkerboard floors, in newer restaurants. The ambiance has always been deeply rooted in nostalgia with music from the 1950s and 1960s playing indoors and outdoors. DÃ©cor hangs its hat in the same simpler era. Seared burgers (from the same Nico grills that Burger King uses but with different technique, according to Johnson) and fries are the constant stars of the menu, but now chicken, pork tenderloins, chili, sloppy Joes and chocolate shakes are prominent. Burgers are notable for their sesame seed squishy buns and generosity. The smallest includes a quarter-pound beef patty. The largest is too big for many mouths. Shredded lettuce, tomato slices and all the usual condiments are piled high. 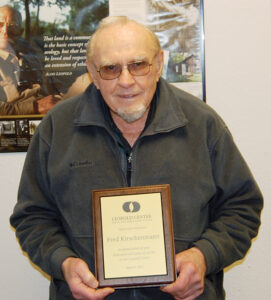 The Leopold Center is named for Aldo Leopold (1887-1948), a native of Burlington, Iowa, known internationally as a conservationist, ecologist and educator. He saw the need for development of a land ethic, outlined in his 1949 book of essays, âA Sand County Almanac.â The Leopold Center for Sustainable Agriculture at Iowa State University was created through the 1987 Iowa Groundwater Protection Act. The Centerâs goals are to identify and develop new ways to farm profitably while conserving natural resources. Fred Kirschenmann was the driving force in making the organization renowned internationally.

North Dakota farmer Kirschenmann particularly picked up on research that showed how heavy doses of nitrogen fertilizer led to the deterioration of soil. His student David Vetter found that the heavy use of chemical inputs in conventional farming created what he called a âchemical treadmill.â Farmers would use a pesticide, then find the following year that bugs had grown resistant, forcing them to resort to newer, more expensive products.

In 1976, after his father suffered a heart attack, Kirschenmann moved back to his family farm, on the condition that he could run it organically. It is planted with diverse crops to allow for crop rotation that has allowed him to farm productively without synthetic fertilizers or pesticides, creating a rich, deep soil.

Kirschenmann then returned to academia and became professor in the ISU Department of Religion and Philosophy. He holds a doctorate in philosophy from the University of Chicago and worked for several different nonprofit organizations in order to advance the cause of sustainable agriculture. In 1979, he helped found and served as the first president of the Northern Plains Sustainable Agriculture Society. In 1994, he joined the board of the Henry A. Wallace Institute for Alternative Agriculture. He became its president three years later. Kirschenmann served as the director of the Leopold Center for Sustainable Agriculture from July 2000 to November 2005. He currently holds the position of distinguished fellow. He has been appointed to USDAâs National Organic Standards Board and the National Commission on Industrial Farm Animal Production operated by the Johns Hopkins School of Public Health.

In April 2010, the University Press of Kentucky published a book of Kirschenmannâs essays, âCultivating an Ecological Conscience: Essays from a Farmer Philosopher.â Those trace the evolution of his ecological and farming philosophy. Kirschenmannâs farm has been featured in National Geographic, Business Week, Audubon, the LA Times and Gourmet magazine. In 1995 it was profiled in an award-winning video, âMy Fatherâs Garden.â

The Leopold Centerâs mission includes an educational component to inform the agricultural community and the general public about its 30 years of research findings. It has a national reputation for cutting-edge research, which has led to significant dividends for Iowa â cleaner water, better conservation of natural resources, and greater agricultural vitality.

Between 1998 and 2017, the Leopold Center awarded more than 500 competitive grants coming from every Iowa county. These awards often acted as seed money to leverage other funding for research and demonstration projects aimed at developing profitable and sustainable farming systems for Iowa. ♦