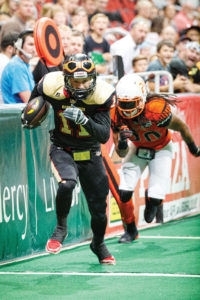 The strength of this yearâs team, according to Coach Dixie Wooten, is the wide receivers. He says he has the best group in the league and that WR Brady Roland is the best player on the team. Photo by Picture Iowa

âWe did it last year, and weâre going to do it again this year,â says Iowa Barnstormers Head Coach Dixie Wooten. The coach isnât talking about 2017âs franchise record 11-game winning streak. Instead, heâs offering up his first offensive play of the season to anyone who is listening, including the Barnstormersâ first opponent, the Nebraska Danger, and its head coach, Mark Stoute. Wooten says his first play call will be identical to his first play call a year ago.

The goal of the play is simple. Wooten wants to see how the opposing team will react. He is looking to see what lengths it will go to to stop his elite wide receiver, Brady Roland.

Sports fans everywhere are aware of the high energy, potent action of indoor football, and the energy surges off the charts when the home team is on top of its game. Coming into last season, though, the Barnstormers hadnât given home fans much to cheer about in recent campaigns. But that was then. Iowa is now in the Dixie Wooten era. Prepare to enjoy it.

Last season was the first for Wooten as the main man in charge on the sidelines. Many point to him as the reason for last seasonâs impressive turnaround, and you wonât find many who would argue.

âWe lost in the playoffs,â he says. âBut at the end of the day, I think it was a great year.â

Wooten has a dozen years of indoor football experience under his belt. He started out playing quarterback. After seven seasons, he transitioned to coaching. Prior to leading the Barnstormers, the coach enjoyed success as offensive coordinator of the Cedar Rapids Titans. Now, after bringing about the Barnstormersâ quick success, indoor football gurus around the league have their eye on the 38-year-old as an emerging offensive mind.

âI call the plays,â he says. 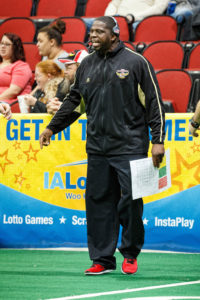 Dixie Wooten was honored as the Indoor Football Leagueâs Coach of the Year in 2017, his first with the
Barnstormers. The team went 13-3 after a 2-2 start, winning a franchise record 11 straight games and earning its
first playoff appearance since 2009. Photo by Picture Iowa

Losing in last seasonâs IFL semifinals to Sioux Falls was disappointing for the Barnstormers. The Storm had Iowaâs number in 2017, as the defending Indoor Football League champion defeated them for the third time of the season by a score of 66-32 in the United Conference Championship game.

Still, by nearly any measure, last season was a good one for Iowa. The team reversed its path from the previous year. In 2016 the team jumped to a 3-1 start before falling into a tailspin and dropping 11 of its next 12 and eventually finishing 4-12. But in 2017, with Wooten running the show, the Barnstormers changed its course. The team began slowly, starting 2-2, but once the team warmed up to the coachâs system, it caught on fire and ripped off 11 wins in its next 12 games to finish 13-3 in the regular season and earn the franchiseâs first playoff appearance since 2009.

Are you ready for indoor football?

In the IFL, each team lines up eight players instead of 11, as in standard football rules. Generally, the indoor game moves faster than the pace of traditional football. Teams utilize two fewer linemen on each side, and the field is about half the size as in the NFL. These differences make the game unique and emphasize the importance of quickness and the ability to make plays in tight spaces. In years gone by, players often played both ways, suiting up to play both offense and defense, but that is no longer the case. Offenses often put up 60 points or more in a
contest, but defenses are critically important, too.

âYou can play defense in this league,â Wooten says. 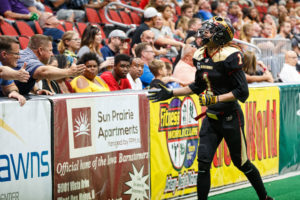 As a young kid running around at Barnstormer games in the 1990s, Brady Roland didnât know he would one day be running pass patterns for the home team. But here he is.

Roland grew up in the Des Moines area. He played high school football for Carlisle, and then he played college football at Grand View University where his team won a national championship.

The homegrown talent is the best Barnstormer on the team, according to Coach Wooten.

Roland led the IFL in receptions throughout the 2016 season, and he improved again last year, posting one of the best seasons that any IFL wide receiver has ever had. He specializes in catching balls, moving the chains and instilling fear in opposing defensive backs. Roland is one of the main reasons for the Barnstormersâ winning streak last year.

The veteran wide out leads a group of split ends that are regarded by many as the best bunch of pass catchers in the IFL. Wooten sees them as the strength of his team.

Roland debuted for the Barnstormers when he was only 20. He is now 24 and a wily old-timer. This will be his fourth season on the Barnstormers roster. Last year he earned First Team All-IFL honors for the second consecutive time. As he enters his prime, Roland believes he is still getting better. That bodes well for the Barnstormers but not for opposing defenses. And looking at the upcoming season, heâs licking his chops.

âHaving fun and winning gamesâ are his goals, Roland says. âAnd trying to get to the next level.â

Indoor football life varies depending on each playerâs given talents, goals, circumstances and abilities. Some players work part-time jobs â like Kurt Warner famously did, sacking groceries at Hy-Vee during his Barnstormers tenure in the Arena League during the 1990s. But few have the luxury of living in their hometown like Roland does, equipped with the talent, brains and opportunity to begin a longer-term career in the white-collar world, while still living the dream, rising through the ranks of professional football and having fun doing it. But thatâs Brady Roland. He is a man who knows what he wants. And when he knows what he wants, he goes and gets it. 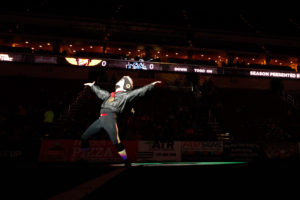 Billy the Barnstormer will receive a makeover before this season. The mascot will be in the stadium at home games hoping to lead the cheers that propel the team to the playoffs. Photo by Picture Iowa

The Barnstormers open on the road in Nebraska on Friday, Feb. 23. The teamâs home opener against the Arizona Rattlers is set for Saturday, March 10. In all, the team plays a slate of 14 regular-season games. And in a scheduling quirk, the Barnstormers will play eight home games at the Well this season.

The coach isnât looking past the first game, though. Vision is one reason for Coach Wootenâs success. Effectively scouting talent is one outcome of the coachâs keen eyes. When he looks at the incoming talent he has up and down his roster, he anticipates another successful year on the horizon. The coach thinks his team has the right incoming pieces, but even with proven eagle eyes, no one can see the future. His players have not yet reported for the season, and the coach is anxious to see how they will fit together. He says you never know for sure what you have with incoming talent, no matter how excited you are to have their services, until you see them getting it done on the field.

The quarterback position in the indoor league, as in most leagues, is the most important position. With the departure of last seasonâs quarterback, Travis Partridge, Wooten welcomes a competition between two talented newcomers, but itâs still uncertain which will win the job.

The Barnstormers signed quarterback Drew Powell during the offseason. The 6-foot 3-inch, 220 pounder is in his second IFL season. Last year he suited up for stints with the Sioux Falls Storm, and later, the Nebraska Danger. By all accounts, he showed considerable promise.

The Barnstormers also snapped up Grant Rohach, a rookie QB with upside. Rohach played for Iowa State University and the University of Buffalo.

âBoth of these quarterbacks can play,â says Wooten.

He intends to go with the player who gives his squad the best chance to win and puts points on the board in bunches. After seeing the two go head-to-head in practices, Wooten will make a determination a week or two before the season starts, giving the winner a chance to solidify himself as a team leader. Having said that, the
coach admits the slight early favorite to take the first snap goes to Powell. He likes the playerâs experience but waivers slightly while mentioning that Rohach is a workaholic.

Whoever gets the nod is certain to benefit from having Roland lining up wide, not to mention the other speedsters the team fields. The Barnstormersâ wide outs figure to be the best in the league.

âI think we hit a homerun getting the receivers back,â Wooten says. âAnd with the new quarterbacks…â

The coach trails off and smiles. He has great vision, and he likes what he sees.

Indoor football is not your grandfatherâs game. The action is packed with unending speedy skill players constantly jockeying to make plays. And lots of points are scored. So when a team can play defense, it is often the decisive difference.

Speaking of defense, Marcus Coleman returns to the team for a second season as the Barnstormersâ defensive coordinator and defensive backs coach. His unit a year ago was a strength for the team, finishing second in the league in fewest points allowed, while giving up a paltry average for the indoor game of only 36.3 points per contest. Coleman knows a thing or two about defense, as he played defensive back in the NFL for 10 years. Malcolm Nelson also returns to the coaching staff to help as defensive line coach, and he serves as special teams coordinator.

âExpect a good defense,â coach Wooten advises. He thinks the unit will finish at or near the top of the rankings again in 2018. âWe will have a top defense again.â

At the Well for Barnstormers games, it is all fun and games until… Well, itâs mostly all fun and games. Imagine 100 Corgi dogs sprinting across the field at halftime, competing to be named champion while the crowd cheers them on.
The Barnstormers annually offer a full slate loaded with fun promotions, according to Juli Pettit, who works in the front office as the teamâs marketing and social media coordinator. She says indoor football is known for the action on the field, but it also has fun off the field, in the stands, as well as before and after games.

She says that two promotions that she wouldnât want to miss are the Saturday, April 28 contest against the Green Bay Blizzard, as that game will be the teamâs Annual Military Night. Likewise, on Saturday, June 2, the game against the Bloomington Edge will be its Annual First Responders Night.

Another favorite of hers in â90s Night, as is, of course, the Corgi sprint. If you havenât witnessed hordes of pumped up pooches intent on winning a race with very little at stake, while Billy the Barnstormer â the teamâs mascot â revs up the stadium…

Weâll see you at the Well. Enjoy the Dixie Wooten era. ♦

MANAGEMENT AND OWNERSHIP
The Iowa Barnstormers have 15 owners; 14 of them are local individuals or area businesses. The majority of the team is owned by Don Lamberti, Jeff Lamberti and Scrap Processors Inc.

John Pettit is the teamâs vice president and chief operating officer. He runs the day-to-day operations. In 2017, he was named IFL Executive of the Year.