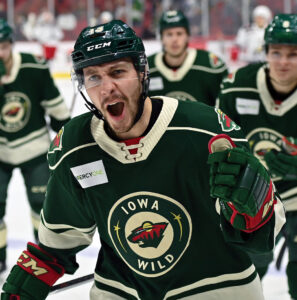 With fall upon us, the start of hockey is right around the corner with two teams raring to go.

Wild coaches, players focus on getting back to winning

A season with a ton of moving parts brought on by injuries and player movement within the organization handed the Iowa Wild a 2021-2022 season with just one more win than losses. The Wild failed to reach the playoffs, despite solid individual performances from high-value players. The Wild had a record of 32-31-9. A late season surge wasnât enough to vault it into the playoffs, but as the 2022-23 season comes into view, led by fourth-year head coach Tim Army, the Wild will strive to return to its winning ways. 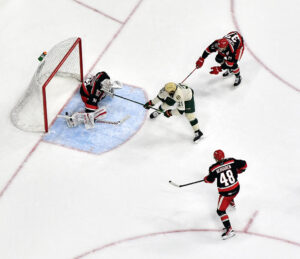 With camp still going on and rosters not yet decided, the Iowa Wild â which is the American Hockey League (AHL) affiliate of the Minnesota Wild â doesnât know yet who will be playing. Players who were on their roster last season will be vying for spots in Minnesota. Army knows that right now the goal is player development, especially before the season starts. Once the teams are decided, then Iowa will focus on improving and winning.

Some players have already shown noticeable improvement in Armyâs eyes from last season to this season. Army pointed to left wing Mason Shaw and right wing Mitchell Chaffee as two players who have shown progress after multiple seasons with Iowa. Shaw is heading into his fifth season with the team. Last season, Shaw finished third on the team in points with 52, third in goals with 19, and second in assists with 33. Chaffee, in his second year with the team, finished with 39 points on 23 goals and 16 assists, good for fourth, second and 10th, respectively. Army also mentioned right wing Nick Swaney, the fifth-place point getter on the team, as someone who has shown development.

Some of the young players who are rising into Minnesotaâs consideration are Marco Rossi, Calen Addison and Adam Beckman. All three players are from different draft classes, with Addison and Beckman coming from the 2018 second round and 2019 third round. Army has seen improvement in their games and said, while they both have a long way to go, they could move up. Rossi is where the prospect status reaches bigger heights. The ninth overall center pick in the 2020 draft led the Iowa Wild in points with 53 with left wing Kyle Rau, putting up a team-leading 35 assists to go with 18 goals, good for fourth on the team. 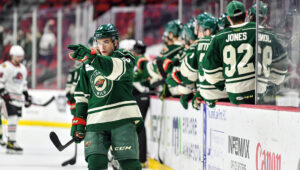 âIt was a really good rookie year for Marco and, again, like [Beckman], heâs an important player for the organization, being a ninth pick overall,â Army said. âHe got a little bit tired about two-thirds of the way through the season last year. Itâs a long year. Itâs tough. He was 20 years old, and itâs tough on young players.â

Despite the grueling schedule, Rossi was one of Iowaâs best players, leading the team in plus/minus as well at plus 11, adding to a solid rookie campaign for him. Rossi, Beckman and Addison are all looking to make the NHL this season but could find themselves in Iowa, depending on how everything shakes out.

Iowa will open its season at home against the Rockford IceHogs, the AHL affiliate of the Chicago Blackhawks. The IceHogs were led in points last season by left wing Lukas Reichel, the 2020 17th overall pick in the first round. The two teams met 12 times last season, with Iowa dominating their battles with an 8-2-2 record. Iowa will have plenty of games against division rivals in the upcoming season, including the Chicago Wolves, a team that Army wants to do better against this season. 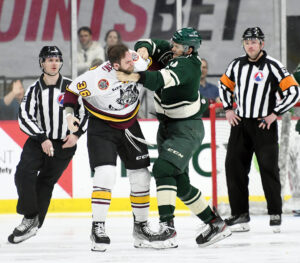 âWe had a tough time against Chicago last year,â Army said. âWe only beat them twice out of 10. They beat us eight times, and one game went to overtime, so essentially out of 20 possible points, we got four and they got 17 last year. Itâs important for us to get over that hump against them.â

Despite all the moving pieces and not knowing exactly what the roster will look like, Army is feeling good about this upcoming season with the goal to make the playoffs and compete for the Calder Cup. After last seasonâs disappointing finish, the team will focus this year on improvement. In his first three seasons coaching Iowa, Army saw successful teams either make the playoffs, or, in the COVID-19 shortened yearâs case, end the season in a position that wouldâve made the playoffs. The excitement before last season was high because of this, but now the philosophy is to improve.

â[My] first three years, we were a playoff-level team,â Army said. âSo, going into last year, we really talked a lot about standard of play and unfinished business, and we really talked about finishing particularly what we werenât able to finish the prior two years, and it mightâve been a little too much mentally for our guys, too.â 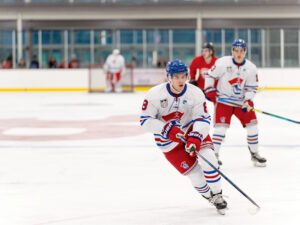 After a last-place finish with just 41 points in the 2021-22 season for the Des Moines Buccaneers in the United States Hockey League (USHL), there is room for improvement this season. The Buccaneers finished with a record of 18-39-5.

There is promise for the 2022-23 season for the Buccaneers however, as Head Coach Matt Curley returns for his second season. The former defenseman has established a 10-year coaching career including jobs coaching young teams like the Buccaneers.

âComing out of last year, we had some younger guys that were with us toward the end of our season to get some good experience, and, so far, those guys have shown well,â Curley said. âTheyâve come in looking good, have taken nice steps through their summer training, and really given us a good baseline to work from. Weâve also had some new additions from the draft and other acquisitions.â 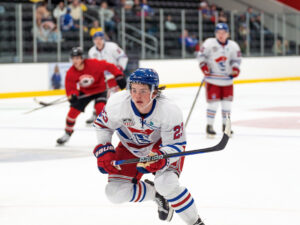 The Buccaneers will be without their top point scorer from last season in forward Scout Truman, who lead the team in goals and assists. The player with the most points returning is forward Henry Bartle. The lefty from Blaine, Minnesota, notched 24 points in 56 games, coming from 20 assists, which was second on the team behind Truman. At 19 years old, Bartle managed to sustain a plus/minus of -5 on a last-place team, playing in 56 of 62 games.

âIt was a very steep learning curve for Mr. Bartle coming from Minnesota high school hockey to the level of this league, the day-to-day grind of everything,â Curley said. âTo his credit, he stuck with it. He made it through, and I think the licks he took along the way last year will serve him well as he heads into this year.â

Curley mentioned a few players he has seen show improvements, including Bartle, forward Michael Stenberg and forward Ethan Fredericks. Stenberg played in 51 games last season, totaling 12 points on one goal and 11 assists. Fredericks played in 48 games, accruing three goals and seven assists to tally 10 points. Curley brought up these players, not to put the spotlight on them, but to give examples of team-wide improvement that is seeing its way through the entire roster. Curleyâs version of improvement isnât just about on-ice achievements either. 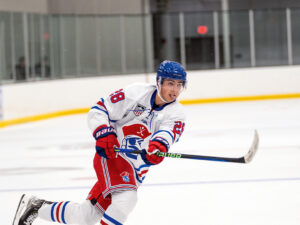 âItâs been a nice collection of guys showing improvement to their games,â Curley said. âThereâs some off the ice stuff, too. Guys maturing, taking on roles that they might not have had in the previous season.â

Improvements for the Buccaneers will also have to come in the form of wins. Des Moines has the first important stepping stone to that in the form of effort. Curley is not worried about the effort his team will, or can, put in for the season. The issue now is with execution and performance, something that should come easier as Curley spends his second year with the team. The first season for a new head coach can be tough, but coaching young players in the USHL also requires time and experience.

âItâs always easier coming back for round two,â Curley said. âI think thatâs in anything in life, whether thatâs an athlete coming back for year two, or in the workforce, as a teacher, whatever it may be, youâve got some more experience under your belt. Iâve been doing this for a number of years, but itâs been awhile since itâs been at the junior level. So having to go through the year we did last year, getting to know the kids a little bit better, getting to know the league, the community â all those things matter.â

The team played its first game of the regular season on Oct. 1, at home against Waterloo. The home opener took place at the new Mid-American Rec Plex in West Des Moines. The Bucsâ actual home arena in Urbandale was missing one key component: ice. Repairs to the ice-making equipment at the 62-year-old facility were ongoing at press time. Curley and the team hope to get back there by sometime in October after their first road trip, with renovations nearing an end sometime in the month.

The Buccaneers have 60 games scheduled between October and April, playing anywhere from one to three games almost every week in that time. Banking on good seasons from returning young players and new additions, Des Moines will look to improve as the team looks forward to a better season with a potential playoff berth at the end of it. For Curley, he knows his team will put in the effort every day.

âRegardless of wins or losses, whatever the results are on a given night, I always like to think that our fans are going to be treated to just an honest and complete effort from our players,â Curley said. âDuring the course of a very long season, these are, at the end of the day, young men. Theyâre kids trying to figure out how to be hockey players, be good people, be good citizens, and part of that is giving what they have to the game and to each other.â ♦