Hit the road: The finest and quirkiest road trip destinations Iowa has to offer

One summer, my dad took our family across the state on a road-trip frenzy. Every weekend brought us to a new destination.

We visited the Field of Dreams, where the 1989 baseball flick of the same name was filmed. We took photos behind Buddy Hollyâs giant rimmed glasses, marking the site of the plane crash that killed Holly, Ritchie Valens and The Big Bopper âThe Day the Music Died.â We walked along the High Trestle Bridge, glowing with blue light on a windy night. We stood outside the American Gothic House, posing like the farmer and his daughter in Grant Woodâs 1930 painting.

The highlight â or perhaps lowlight â of that summer culminated after nearly an hour drive to the small town of Adair. Looming up by the side of the interstate: a yellow water tower, with two cartoon eyes and a mouth printed on the side.

Was it interesting? Mildly, I suppose. Was it worth the hourâs drive of gas? It was to PD Legaspi. Any excuse to load a few snacks, a mini Igloo cooler and the kids into the family Toyota Corolla. Good old Dad.

Although some of our family road trips were hilarious flops, Iowa really does offer a wealth of things to see within a few hours of Des Moines. Although we couldnât include them all, weâve compiled a list of our favorite road trip destinations in Iowa, from picturesque towns and natural wonders to fascinating museums and off-beat stops. Theyâre at least as cool as a smiley face water tower â dare I say, even better.

EDITORâS NOTE: Remember to do your research before embarking on an hours-long drive. Open hours, admission pricing and event offerings are always subject to last-minute changes. 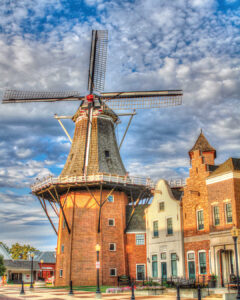 Experience a âTouch of Hollandâ at this town founded by Dutch immigrants in 1847. Although best known for its annual Tulip Time Festival in May, thereâs never a wrong time to visit. Appreciate Dutch history and architecture with historic buildings and gardens, the Klokkenspel carillon, waterway and drawbridge in Molengracht Plaza, and Vermeer Mill. Visiting foodies will love the townâs bakeries, meat markets and restaurants for Dutch letters, Gouda cheese, poffertjes and other delicacies.

In the mid-19th century, German Inspirationists established a communal society of seven villages in east-central Iowa. Today, Amana offers visitors a quaint look at years past, where the pace of life seems to slow down. Stores sell antiques, plus local and handcrafted goods you wonât find elsewhere. Local breweries and wineries boast award-winning libations. The area hosts 10 festivals annually, including Iowaâs original Oktoberfest.

As the former state capital, Iowa City is home to a wealth of museums, many offering free admission. Those in Iowa City and its neighbor, Coralville, include: Old Capitol Museum, Iowa Childrenâs Museum, Antique Car Museum of Iowa, University of Iowa Museum of Natural History featuring Rusty the giant sloth, and the UI Stanley Museum of Art scheduled to open this fall. The city boasts top-notch restaurants, shopping, arts and, of course, the Hawkeyes. 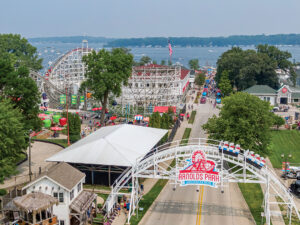 Arnolds Park in Okoboji includes a raceway and âLegend,â one of the oldest wooden roller coasters in the United States. Photo by Tom Gustafson

This unique landform rises from Iowaâs flat terrain in sharp ridges and swelling hills. The formations consist of loess soil â wind-blown glacial silt deposits that are fine as flour. As you hike along the spine, youâll see some of the last remnants of prairie grass in Iowa. While they stretch 200 miles along Iowaâs western border, the Loess Hills State Forest is located in the heart of the hills. Visitor center located at 206 Polk St., Pisgah. 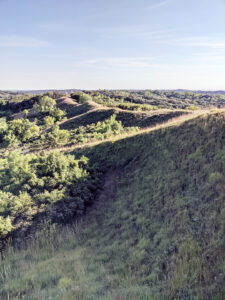 Need a natural way to cool off this summer? This cave stays icy year round â in fact, explorers of this geological phenomenon will find the thickest ice in June. Bring a flashlight and kneepads if you plan to explore the caveâs recesses. Located at Ice Cave Road, Decorah. While youâre there, stop by Dunningâs Spring Park with its 200-foot spring-fed waterfall, and the Vesterheim Norwegian-American Museum. 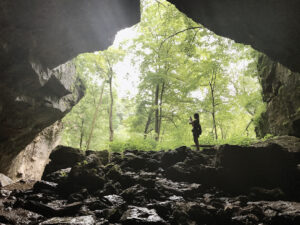 Pikes Peak is a must-see for lovers of the outdoors. An observation deck atop a 500-foot bluff offers panoramic river views, and a half-mile boardwalk takes visitors to Bridal Veil Falls. Plus: Bear Mound and 62 other effigy mounds, 11.5 miles of trails, and the Point Ann bluff overlooking the Mississippi River and town of McGregor. Located at 32264 Pikes Peak Road, McGregor. 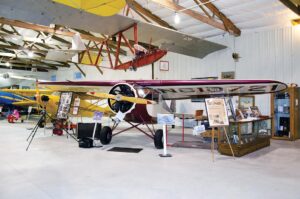 The Iowa Aviation Museum is open daily through November. Photo by Debbie Bates

If youâre an airplane buff or enjoy attractions off the beaten path, youâll love this place. The museum is home to the Iowa Aviation Hall of Fame and several vintage aircraft dating as early as the 1920s. Located at 2251 Airport Road in Greenfield. Hours are 10 a.m. to 5 p.m. Mondays through Saturdays and 1-5 p.m. Sundays. More information at flyingmuseum.com. 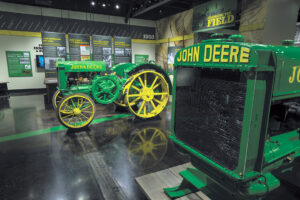 âHobos were migratory workers who helped satisfy Americaâs labor needs starting after the Civil War. They were âhomelessâ by choice; they worked to travel and traveled to work.â Thatâs how the Britt Hobo Days Association describes the group of people it commemorates. Not only do they have a museum â thereâs also the National Hobo Cemetery, Hobo Jungle with a boxcar, and National Hobo Convention and Hobo Days festivities on Aug. 11-14 this year. Museum at 51 Main Ave. S., Britt. More information at britthobodays.com.

The Historic Pottawattamie County Squirrel Cage Jail is one of a kind: the only three-story revolving jail ever built. Built in 1885, it was used until 1969 and preserved for historical purposes shortly after. The jail is also an official museum of the Iowa State Sheriffsâ and Deputiesâ Association. Located at 226 Pearl St., Council Bluffs. More information at thehistoricalsociety.org.

Davenportâs premier art museum is located on the banks of the Mississippi River. The Figge houses thousands of pieces: the Grant Wood Archive, many historical and contemporary works, and one of the largest collections of Haitian art in the country. Located at 225 W. Second St., Davenport. More information at figgeartmuseum.org. 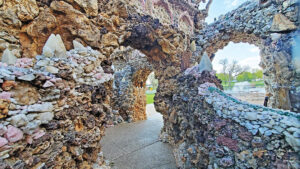 The Grotto of the Redemption is the worldâs largest man-made grotto, with an estimated value of $4.3 million. Its museum houses the largest collection of precious stones and gems in one location. Photo by Leziga Barikor

Shrine of the Grotto of the Redemption
132 miles (2.5 hours) northwest of Des Moines

Perhaps the most unique attraction in Iowa, the Grotto has been referred to as the âEighth Wonder of the World.â Father Paul Dobberstein began construction in 1912, following a decade of collecting rocks and precious stones. Nine separate grottos portray the fall of mankind and its redemption by Jesus Christ. Admission is free. Located at 208 First Ave. N.W., West Bend. Information at westbendgrotto.com.

Nestled in Ida County are several medieval-inspired castles â largely thanks to one manâs efforts. Byron Godbersen, founder of Midwest Industries in Ida Grove, began constructing castle replicas in the 1970s. Today, youâll see them everywhere â from the townâs entrance, to the golf course, skating rink, and even an airport hangar. More information at idagroveia.com/activities/castles. 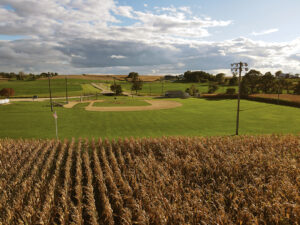 âIs this heaven?â âNo, itâs Iowa!â Get a taste of movie magic in Dyersville, where a baseball field carved out of a cornfield was the filming site of âField of Dreams.â In 2021, the Chicago White Sox and New York Yankees made history by playing the first Major League Baseball game at the farm. This year, the Chicago Cubs will play the Cincinnati Reds on Aug. 11. Located at 28995 Lansing Road, Dyersville. More information at fieldofdreamsmoviesite.com.

Home to the manufacturer of Blue Bunny ice cream, Le Mars is the perfect place to satisfy that summer sweet tooth. The Visitor Center and Ice Cream Parlor offers family fun with a theater, virtual soda fountain, freezer robots, and colorful Instagram-worthy backdrops. You can, of course, choose between 40 flavors of ice cream, plus other treats. The cityâs annual Ice Cream Days festival is June 16-18. Located at 115 Central Ave. N.W., Le Mars. Find information at ilovewells.com. ♦

Take the road less traveled to these unusual attractions, all within an hour of downtown Des Moines. 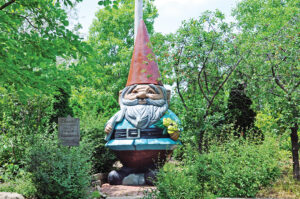 The sculptures at this offbeat park include the worldâs largest binder clip, a flying woman, and an egg-shaped UFO hovering 27 feet above the ground. Step aside, Pappajohn Sculpture Park.

This locally owned historical movie theater has something others donât: Joy the mini-pig! Visit her dressing room, or, if youâre lucky, watch her perform tricks under the marquee between shows. Call ahead to make sure sheâll be there â Joy has a full schedule. 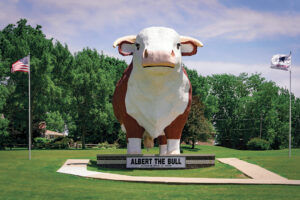 Visit a 90-year-old Sinclair gas station, restored to its former glory. The 5-cent gas may seem like itâs too good to be true â and it is. The station isnât operational. Sorry!