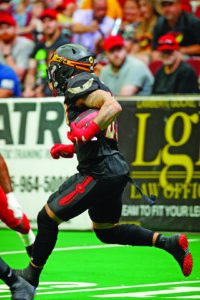 Barnstormers rookies find the pace of indoor football to be much faster. Photo by Picture Iowa

Mention the Iowa Indoor Football League franchise name around the league, and, inevitably, the discussion will circle back to the most famous âStormer of them all, Kurt Warner. Some things you just canât shake. Peterson, heâs cool with it, though. He realizes that, until he makes it to the National Football League and wins a Super Bowl ring of his own, Warner remains the be-all and end-all of Barnstormer football lore.

âI havenât seen the movie yet, but Iâve heard his story a million times, and itâs a good one,â Peterson said of âAmerican Underdog: The Kurt Warner Story,â the 2021 big screen release detailing the story of the one-time Hy-Vee shelf stocker.

Whether or not the 2022 Barnstormers can get back to the glory days of the seasons past has yet to be seen. Itâs a long road to greatness, as Peterson found during the teamâs first game of the season, a 40-24 loss to the Quad City Steamwheelers.

âIt was a heartbreaker for us,â Peterson said of the game. âWe knew we were a good team, but we just didnât execute to the fullest. But thatâs the way football goes.â

For 15 of the 25 players on the Barnstormersâ roster, this season is their first foray into the indoor game, one that can be as unforgiving as it is exciting.

âThis a fast-paced game,â Peterson said of his indoor football debut. âItâs fun. Iâd call it a circus out there. There are a lot of moving pieces that are going really fast in a smaller space. It probably took a couple of days of camp to really get used to things like the sideline barriers and the size of the field.â

âThe main difference is the spacing,â he said. âEverything moves quicker. Thereâs no time to be inefficient, and thatâs the reason why I like the indoor game. You canât float around and read stuff like in the outdoor game. Here, you just have to go. The ball is out of the quarterbackâs hand so fast. Outdoor, we had the three-step, five-step or seven-step, but here, it seems like, as soon as the quarterback gets the ball, itâs gone.â 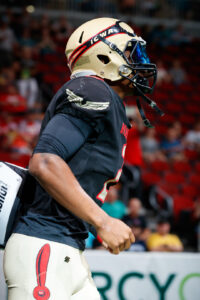 Player and coach turnover is part of the game for indoor football teams, as they hope to get noticed and move on to the CFL or NFL. Photo by Picture Iowa

The indoor game marks the third different field of play for Peterson in as many years. After playing four seasons at the College of Idaho, Peterson tried his hand in the Canadian Football League (CFL) for a year with the Montreal Alouettes, where the field of play is 120 yards long, compared to the standard 100 yards of the American game. Arena football, however, is just 50 yards in length.

Peterson said the learning curve of the indoor game is steep at first, as was echoed by new Barnstormers Head Coach Dave Mogensen, the person responsible for getting Peterson to Iowa.

âThe techniques are similar, but there are some nuances because of the angle of the small field, the wall, etc.,â Mogensen said. âItâs similar to when a kid goes from high school to college. Thereâs a large uptick in the speed of the game. Everybody on the team was the best player on their team at the last level, so it just makes everything happen just a little faster. You have to react faster, and sometimes you just have to see that live, and to feel it, to comprehend how to turn yourself into that mode in the future.â

Mogensen took over the Barnstormers head coaching position last fall following a 6-7 season in 2021 that ended with a first round playoff loss to the Duke City Gladiators. Prior to coming to Iowa, Mogensen served as the assistant general manager and director of player personnel for the Albany Empire of the National Arena League (NAL) during the 2021 season, helping guide the team to a league championship. Mogensen is no stranger to the IFL either, having served as the offensive coordinator for the Green Bay Blizzard during the 2018 and 2019 seasons.

With his hiring, Mogensen became the fifth head coach in the last six years for the Barnstormers. On Aug. 24, 2016, Barnstormers head coach Joe Brannen was replaced by Dixie Wooten. Wooten left the team in 2019 and was replaced by Ameer Ismail, who did not coach a game for the team when the 2020 season was cancelled due to the COVID-19 pandemic. The Barnstormers then hired Les Moss for the 2021 campaign, before releasing him after the season. Now, itâs Mogensenâs turn.

Take a breath, Mogensen said. Turnover should be expected at this level.

âItâs why weâre all here, the players and the coaches,â he said. âThatâs what the IFL is for: advancement, whether itâs a player or coach trying to get to the CFL or the NFL. Myself included. I want to build up a nice brand here with Iowa and maintain the level of excellence theyâve shown the last three or four years. Then hopefully someone will take a peek at me and give me a shot at a higher level, just like our players.â 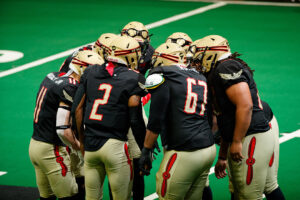 McBorrough steps into the linebacker vacancy left by departed linebacker Tony Jones, the First Team All-IFL, All-Rookie Team member and Defensive Rookie of the Year in 2021 who now plays for the Toronto Argonauts of the CFL.

McBorrough said that, while the Barnstormers are youthful, eventually things should come together. With experience will come victories, he predicts.

âI see us being really successful. Every day, weâre just going to keep getting better and better,â he said. âOnce we hit our full potential, itâs like coach said after the (Quad City) game: âOne thing we can say is that nobody is a rookie anymore. You guys know what it is now, and now we have to work at it and get better.â â

Mogensen said he and his players are indeed very much concentrated on the here and now. They have to be. Their football futures depend on it.

âThe IFL is a tough league, so thereâs no bottom-of-the-conference team, or a team thatâs bad year-in and year-out,â he said. âI think if we can stay healthy and pick up some pieces along the way, we can be a team that can make the playoffs and make some noise.â

Mogensen will lean on defensive back J.R. Stevens and veteran receivers Eric Thomas and Kezlow Smith, who played for Mogensen in Green Bay from 2018-2021.

âOur offensive line has a couple of veterans returning as well, so we should be one of the more explosive offenses in the league, and that should become our identity,â he said.

Peterson, whose last collegiate football game at the College of Idaho was played in Des Moines against Grand View, likes the Barnstormersâ chances this season as well.

âOur end goal is to get to the United Bowl, and, as a team, we have enough ballers to get there I think,â he said. âWe can do this; itâs just about getting the execution on game day.â ♦