Purchasing tickets from scalpers or resellers? Read this first. 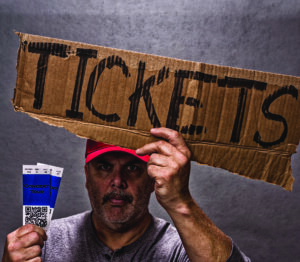 Is it even a concert, game, event, etc. if you donât encounter at least one scalper trying to offload tickets at a premium price on your walk up to the venue? Itâs easy to conjure up images of this scenario in your head, because youâve likely encountered these folks at one time or another â especially in Iowa, where there are no ticket scalping laws. Yes, thatâs correct.

Before we get in too deep, though, letâs refer to our trusty dictionary to define what exactly a ticket scalper is: an unauthorized ticket speculator who buys tickets to a performance or sports event and resells them at inflated prices.

In 2019, the Iowa Attorney Generalâs office published an article in its Consumer Focus monthly newsletter about how to avoid ticket sales âhorrorâ during March Madness and other events. The piece shared a cautionary tale and warned âbeware of resale sites, scalpers and other unregulated sellers while shopping for tickets to shows and big games.â

But do they have to have such a bad rap? According to former ticket scalper Jim Duncan, who is a writer for this publication, the answer is no.

âI think thatâs gone with the reality that there will always be people who might have an extra ticket, and they might as well get some value out of it if someone wants it,â he says.

An incomplete history of a past ticket scalper 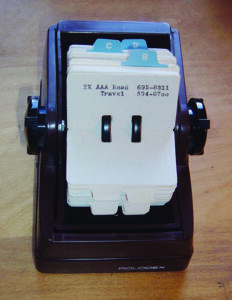 Ticket scalpers of yore relied heavily on using a Rolodex, but like many things pertaining to ticket reselling of yesteryear, this is obsolete. ArnoldReinhold, via Wikimedia Commons

The consummate moment when Duncan became a ticket scalper was during the 1976 Summer Olympics in Montreal. He traveled up north and stayed for the entire event, returning home with considerably more money than he left with. Duncan found that buying and reselling tickets was an intriguing, profitable business.

âItâs a primal game, like everything else in business and economics,â he says. âThe market was thrilling to me.â

The icing on the cake during that first go-around as a ticket scalper was selling tickets to Mick Jagger and his then-wife Bianca not once, but three times.

The first time was by chance, but for the other two encounters, it was like Jagger and Duncan were old pals.

And when Jagger was digging in his pockets for payment, he handed Duncan his hot dog and said, âHold my wiener, mate, Iâve got to look for my money.â

Duncan looks back on his experience as a ticket scalper at the Montreal Olympics as a glamorous and exciting time â the thing of myth and legend. Thatâs how he treated the business for the next decade, when he focused primarily on scalping in Iowa City. He concentrated his efforts there because after Hayden Fry became the head coach of the Iowa Hawkeye football team, tickets became important and, therefore, more valuable. Duncan also scalped tickets at the College World Series in Omaha, a âsophisticatedâ market, for about 20 years.

Ultimately, Duncan feels that the business of buying and reselling tickets is like a game where you have to make important decisions with limited information.

âScalping is like playing poker; you have some information, and you can glean some information by reading your adversaries, or customers, about how much theyâre willing to pay, and how much is the value of what youâre buying and selling,â he says. 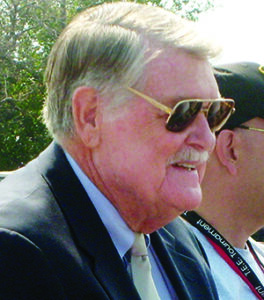 By the time of the 1996 Summer Olympics in Atlanta, when many international sellers came from overseas to scalp tickets, the scene changed completely. Duncan even got beat up during that time. The game had become ruthless.

But what truly changed the ticket scalping business was the Internet, which is where a majority of it happens these days.

âScalping used to be a Rolodex business,â Duncan explains. âYou went to a game with an inventory because you called everyone you knew about tickets in hand. No one even has a Rolodex anymore, and tickets in hand are almost obsolete because of smartphone apps. No one camps out for 24 hours to buy tickets anymore.â

He adds that Steve White, who owned Music Circuit Productions and brought more big-time rock shows to Iowa than anyone else, used to say that buying a ticket months in advance was the biggest thrill of the concert to many, and people usually bought their limit to resell to friends or for profit.

âThatâs all gone with the wind now,â Duncan says.

He does have a sneaky piece of advice for folks who buy from ticket scalpers. When Duncan would still have tickets to sell right before an event began, heâd sell them for any price at all, specifically starting at the 30-minute mark before game time. Typically the people who would pay more than face value for a ticket would be gone before the final 30 minutes leading up to an event.

Duncan remembers that the most overpriced ticket he ever sold in Des Moines was to a Paul McCartney concert. The biggest loss he ever took? A ticket to a Boz Scaggs concert.

Although Duncan is out of his ticket scalping days, heâll never forget the glamor it added to his life for a period of time â or when he held Mick Jaggerâs âwiener.â 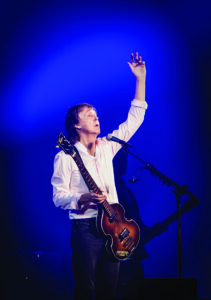 One historically inflated price, according to a long-time ticket reseller, was a ticket to see Paul McCartney when he came to Des Moines.  Image by Darkmoon_Art from Pixabay

Not all ticket resellers are like Duncan, though. Many have no quarrels about selling illegitimate tickets to unsuspecting customers.

In order to avoid being duped and ensure that your tickets are authentic, Kathryn Dickel, co-founder of ticketing company MIDWESTIX, urges folks to buy through a primary ticketing company, such as directly from the venue or whatever ticketing service they use.

She puts it bluntly: âDo not buy your ticket through a secondary ticketing system. The secondary market is approximately twice as large in revenue as your primary market, so thatâll tell you something.â

When purchasing tickets from the secondary ticket market â also known as the resale market, which includes websites like StubHub and Vividseats â consumers should expect to pay a lot more since the prices are incredibly inflated. People are essentially buying from independent brokers or companies on those sites, often scalpers, so theyâre dealing with folks who are buying large swaths of tickets and reselling at an increased cost.

âThereâs a whole spectrum of shadiness within that market itself,â Dickel says.

She notes that while there are legitimate secondary ticketing companies, there are just as many illegitimate as well, and oftentimes consumers donât know how to tell the difference.

âOur biggest concern with resellers is always the guest experience, because itâs hard when we have people come to a show and we have to tell them that they did not purchase from our website, and they unfortunately have fraudulent tickets,â she says. 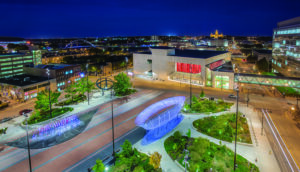 Looking to see a show at one of Des Moines Performing Artsâ venues such as the Civic Center or Temple Theater? Your safest protection from buying a fraudulent ticket is to purchase directly from their website or box office.

Bridenstine adds that customers often unknowingly purchase from a secondary market seller because their websites pull into the top of search engine listings, as these companies typically pay more to elevate their websites in a search.

âOur recommendation is to always buy direct through the venue or the artist source,â Bridenstine says. âSo in our case, only tickets purchased through Des Moines Performing Arts directly, either online at DMPA.org or through our phone line, are tickets that we can guarantee as valid.â

This tip applies across the entertainment industry, including for events that use a primary ticketing company like MIDWESTIX.

For example, consumers might search Google for tickets to a Garth Brooks concert at the Clay County Fair, yet the first result may not be the fairâs website, but a secondary ticketing company. They think theyâre purchasing a legit ticket, but sometimes theyâre not. Then if something were to happen with the event â like a cancellation or postponement â those ticket holders would be out of luck. When the venue goes to look their ticket up, the system doesnât show it was purchased by the consumer. It was purchased by a secondary person or company, so thereâs no way for them to get a refund.

If the consumer would have purchased a ticket directly through the venue or event website, though, the issue could have been resolved. 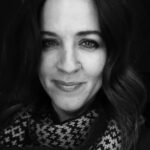 Dickelâs company only works as the primary ticketing company and partners with numerous Midwest venues and events â from Gas Lamp in Des Moines to the Clay County Fair â to provide full-service ticketing services.

âItâs been an epic ride,â she says of the business. âWeâve pretty much ticketed almost every organization in Des Moines.â

Dickel adds, âWe provide a level of security that youâre not going to get from a secondary ticketing provider.â

Another benefit to buying from a primary ticketing service like MIDWESTIX is that it ultimately boosts the local entertainment scene and economy. For example, funds from service fees collected by MIDWESTIX are used to operate, manage and fund City Soundsâ annual public piano project in Des Moines. The company has also sponsored many local events and even provided some ticketing services for free.

She adds that over the 20 years itâs been in business, MIDWESTIX has formed close partnerships with many local organizations.

âOne of the things weâre proudest of is having really long relationships,â Dickel says. âThe first client we ever signed was the Civic Music Association, and theyâre still a client of ours.â

Dickel claims that one of the biggest surprises in MIDWESTIXâs history was selling 18,000-some tickets to an Eric Church concert in the early days of Guthrieâs River Ruckus. Church was just emerging as a popular artist, so the big turnout was a shock. Now the country-music star is as hot as they come, and during his 2017 Holdinâ My Own Tour, which had a stop in Des Moines, Churchâs team revamped the pre-sale and on-sale process to eliminate scalpers from the equation, ensuring his core fans got tickets at face value.

As vaccines for COVID-19 rolled out, Dickel notes that another surprise has been the number of tickets being sold to current events, including to the Fayette County Fair, which had a âreally big jumpâ in sales numbers.

As events, concerts and games let fans in again, itâs important to keep ticketing decisions in mind. Yet regardless of how folks choose to purchase their tickets, one thing remains true: Iowa has no ticket scalping laws, so do your research before purchasing from a reseller, or play it safe and buy direct from the source. ♦