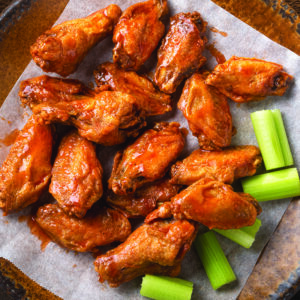 No other edible food has undergone as drastic a change of fortune in the last half century as the once humble chicken wing. Before the 1980s, it was the cheapest part of the bird not counting feet, necks, gizzards and hearts. In the 1960s, wings cost 9 cents a pound when whole chickens went for 69 cents. Wings, as a dish to themselves, were rarely served outside of Chinese restaurants. Today wings are the most expensive part, costing as much whole as skinless, boneless breasts at Fareway.

What the hell happened? Teressa Bellissimo, owner of the Anchor Bar in Buffalo, began serving deep fried wings with cayenne pepper and butter sauce in 1964. The cheap snack encouraged more drinking. The idea spread, and by the 1980s, Buffalo wings were national. In fact, Buffalo Wild Wings was founded in Ohio and is now headquartered in Georgia. Ever since, hot wings have been served mostly with ranch or blue cheese dressing, carrots and celery.

Wings became so popular that they evolved in three decades from being the cheapest part of the bird to the most expensive. They are not a free snack for drinkers anymore either. In fact, âwingsâ now are less than half of the wings Teressa Bellissimo began serving. They are cut into âdrummiesâ and âflats,â and the tips are sent to the stockpot or discarded. So, one-third of an old wing is now called a wing. Hooters pioneered that deceit in the metro. âBoneless wings,â a recent innovation, are not wings at all. They are breasts pretending to be wings. Hooters did not pioneer that.

How old is this story?

The long, strange trip of the chicken wing began in the jungles of South Asia, East Asia and Southeast Asia. Most genetic studies conclude that the chicken originated in all those places independently. The clade that evolved in Europe, America, Africa and the Middle East is believed to have come out of ancient India. From there it moved to Lydia, Egypt and Greece. Domesticated jungle fowl was not raised for food until the Greeks discovered they tasted good in the 4th century BC. Until then, they were raised for cockfighting and ceremonial sacrifice.

With a total population of 23.7 billion as of the 2018 chicken census, these birds are one of most popular domesticated animals. That population is exploding, too, rising by a billion every 14 months. There are more chickens in the world than any other bird and far more chickens than humans. The nickname âthe bird that gives birth every dayâ came from North Africa some 17,000 years ago. The word âchickenâ was popularized by restaurants in England and America. Before the last several centuries, they were called fowl, jungle fowl and red jungle fowl.

In the wild, chickens scratch at the soil to search for seeds, insects and even animals as large as lizards, snakes and mice. The average chicken may live for five to 10 years, depending on the breed. According to the Guinness Book of Records, the worldâs oldest known chicken was a hen that died of heart failure at the age of 16. Galliformes, the order of bird that chickens belong to, traces its heritage to the survival of birds when all other dinosaurs went extinct. Water or ground-dwelling fowl, similar to modern partridges, survived the extinction event that killed all tree-dwelling dinosaurs. Some of these evolved into modern chickens. Domesticated chickens freely interbred with types of jungle fowl. The gene that gives chickens yellow skin came from breeding with grey jungle fowl. The unusual ability of chickens to reproduce traces to the red jungle fowl of Southeast Asia, with which domestic chickens share nearly 80 percent of their genetic makeup. The White Leghorn shares even more.

Chicken breeding became sophisticated during the grandeur that was Rome but was lost in the Dark Ages. Domestic chicken in the Americas before European contact is uncertain, but blue-egged chickens, found only in the Americas and Asia, suggest an Asian origin. Blue chickens are still popular in San Franciscoâs Chinatown. Araucana chickens, which were sold at the Des Moines Farmers Market by Fox Hollow Farms, were developed in Chile before any contact with Europeans. They are delicious birds that lay lovely, large, green-blue eggs. Genetic tests suggest they came to Chile from ancient Polynesia.

Chickens today arenât as free spirited as their ancestors. Today, more than 50 billion chickens are reared annually for meat and eggs. In the United States alone, more than eight billion chickens are slaughtered each year for meat, and more than 300 million chickens are reared for egg production. The World Watch Institute reports that 74 percent of the worldâs poultry meat and 68 percent of eggs are produced this way on factory âfarmsâ that are usually tightly packed confinements. Chickens will naturally live for five or more years, but factory âfarmâ breeds typically are slaughtered before they live six weeks. Even free ranged chickens only make it to 14 weeks of age.

Anatomy of the scrumptious wing 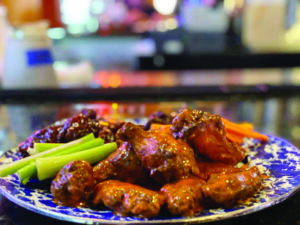 The chicken wing anatomically resembles the human arm. The part popularly called âthe drummyâ consists of one bone, the humorous, between a shoulder joint and an elbow joint. The âflatsâ have the same two bones as the human forearm â ulna and radius. The often-discarded âtipsâ are more complicated, as are human hands, with seven bones with five different names.

Those drummies have biceps and triceps on opposite sides of the humerus. The muscles we eat on the flats are called the radius longus and the ulnaris. While most people think the radius longus is the tastiest part of the wing, it is also the smallest. Tendons in the wing are much less developed, and easier to remove, than those in the leg, making them easy to chew and digest.

In âCookâs Science,â from Cookâs Illustrated, Americaâs Test Kitchen takes a thorough look at what makes wings unique. They have a far smaller ratio of meat to skin and bone than any other cut of meat on the bird. Including the amount of collagen in the skin, they have the highest percentage of fat, too. The amount and nature of this collagen greatly affects how chicken wings cook. At 135 degrees F, the collagen starts to turn gooey, keeping the meat juicy. That explains why wings smoked at low temperatures taste so good.

The perfect chicken wing, according to Test Kitchen, has crispy skin and juicy insides: âWhen cooking them on their own â grilling, frying, or roasting â itâs important to dehydrate the skin and render the fat so that the skin can become crispy, not soggy.â Brining will make them moist, and it also adds too much moisture to the skin. Salting is better, according to Cookâs. Some other tips include skipping the sauce coating and using a mix of cornstarch and skim milk. The cornstarch crisps faster than bare skin, and the milkâs âprotein and lactose quickly undergo the Maillard reaction (which is to protein what caramelization is to carbohydrates), producing deep browning in record time.â One recipe also calls for letting the chicken wings air-dry in the fridge for up to 24 hours before cooking to help the batter stick to the wings. The legendary food scientist Harold McGee of Stanford goes so far as to dehydrate his turkeys with paper towels and a hair dryer. That likely works well with chicken wings, too.

Fried chicken, led by wings, is in a renaissance of popularity. More than a quarter-million people attend the London, Kentucky, Chicken Festival each year. The âworldâs largest frying panâ deep fries chicken quarters for three continuous days and nights.

Why are chicken wings better tasting than those of other birds?

A duck wing has seven bones of five different types. Strong flying birds, like geese, have hollow bones in their wings, which aids flight. Such birds might have more than one-third of their body weight in the wings. The muscles work so hard, they become tough. Not so with chickens of modern times. Ever since a religiously zealous chicken rancher named Billy Pilgrim determined to reengineer a godlier chicken with more white meat and less dark, the chicken has almost completely lost its ability to go airborne.

Where to taste-test wings 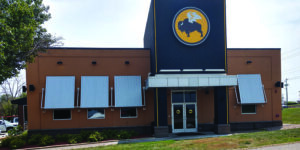 Hot wings originated in Buffalo, even if the company is in Georgia.

Asian restaurants are still the likeliest places to find chicken wings. Sports bars are second and are closing the gap, in Des Moines at least. Barbecues, brew pubs and family cafÃ©s offer their own takes, too. 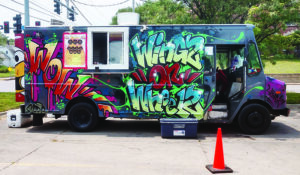 Wings are so popular now that some food trucks exclusively serve them.

Wellmanâs Pub, which served them free at happy hour back in the early 1980s, now serves them smoked, naked or with a choice of hot Buffalo, sweet chili, barbecue, mild Buffalo, garlic-Parmesan, teriyaki, honey-citrus, Sriracha-bourbon, honey-barbecue, tropical habanero or Thai peanut. We now have wings trucks like Wingz on Wheels and wings chains like Wingstop.

So, who serves the Ultimate wings?

Food is the new politics. Both subjects inspire intense loyalties that are usually only shared by members of the same tribe. Just as Alexandria Ocasio-Cortez fans canât comprehend how anyone could support fully funded police forces, lovers of sweet and sour Asian chicken wings canât understand how others could prefer ghost pepper hot Buffalo wings. As much as anything, food arguments are more splintered than political ones. Thatâs probably because every human has a unique combination of 2,000 to 8,000 different taste buds, each of which can be more or less sensitive from one personâs tongue to anotherâs. Those different combinations are as distinctive as fingerprints, yet most people want others to like eating the same things they like to eat. I know couples who broke up over food selections and women who dumped boyfriends for not allowing them to eat off their plates. ♦