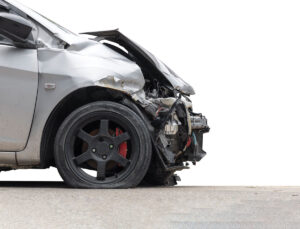 On Sept. 29, 1905, F. D. Harriman, an attorney from Hampton, lost control of his vehicle, hit a bridge and crashed into a ditch. Tragically, Harriman died as a result, and he became the stateâs first car-related fatality on historical record.

Des Moines doesnât have a middle name. If it did, most likely, it wouldnât be âdanger.â But danger does exist when we get behind the wheel, and more than two-thirds of Iowaâs population is licensed to drive. As such, CITYVIEW perused state records to identify the local places where the most accidents happen and to report other items of interest regarding automoblile outcomes.

Caution… HONK! HONK! Watchout! Hold your horses? Start your engines… Oops. And away we go.

Intersections with the most injurious crashes (2014-2018)

Intersections with the highest number of injurious crashes (fatalities, suspected serious injuries, and suspected minor injuries).
Note that these are listed by crash frequency at all intersection types regardless of traffic volumes, configuration or traffic control. 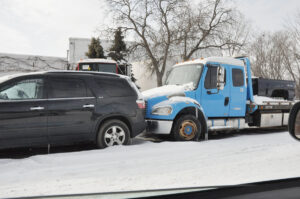 DEATHS ON THE DECLINE SINCE 1970

More than 2.3 million drivers are licensed to drive in Iowa. But in the last 10 years, Iowa has averaged less than one auto-crash-related death per day in Iowa (2011-2020).
Source: iowadot.gov/mvd/stats/licenseddrivers.pdf

More than 20 percent of all auto-related fatalities nationwide occur at intersections.
Source: ctre.iastate.edu/research-synthesis/intersections

Based on the number of accidents on a per-person basis, or on a vehicle-miles-driven basis, accidents happen at a higher rate within the boundaries of Des Moines proper than in central Iowaâs five biggest suburbs â West Des Moines, Ankeny, Urbandale, Waukee and Johnston. When added together, the population of these five suburbs is roughly equivalent to Des Moines proper. During the previous five years (2016-2020), Des Moines has incurred 78 traffic fatalities compared to 29 by the Big 5. Disparities also exist when comparing the ratio of serious injuries or total crashes.
(See top chart)

The chart below lists the raw numbers of pedestrian-related traffic accidents in Iowa, including fatal, suspected serious, suspected minor, possible and unknown injuries.

Americans who ranked themselves âbetter than averageâ at driving. A Swedish psychologist, Ola Svenson, famously conducted a study where he asked college students to rank their own driving ability among their peers. An incredible 88 percent of the Americans ranked themselves in the top half when it came to driving safely, and 93 percent of the Americans ranked themselves âbetter than averageâ regarding their driving skill. Since only half of a given population can be above average, these results, which have since been duplicated with varying degrees of success, indicate that many of us overestimate our aptitude behind the wheel. This phenomenon has become known as the Dunning-Kruger Effect.

Number of auto accidents caused by a driverâs error, according to The National Highway Traffic Safety Administration (NHTSA) in a 2015 report. The critical reason â defined as the last event in the crash-causal chain â was assigned to the driver in 94 percent (Â±2.2%)â  of the crashes reviewed.
Source: crashstats.nhtsa.dot.gov/Api/Public/ViewPublication/812115

SPEEDING AND OTHER FACTORS

The potential for danger exists in many of the places noted in this story. But certain activities will transform your front seat into the most dangerous place on the road. Texting, drinking, no-seatbelt wearing… The following stats pertain to auto-related fatalities where the activity was noted by the officer as a contributing factor to the crash.

1 â Number of fatal Iowa crashes when âdriving less than the posted speed limitâ was listed as the cause (2016-2020).

97 with seatbelt, 98 without seatbelt â Number of Iowa traffic fatalities in 2020 where seatbelt usage could be determined and that did not involve pedestrians, motorcycles or people who arenât required to wear seatbelts.
Source: iowadot.gov/mvd/stats/previous_daily.pdf

*Being arrested for an OWI can cost a person $10,000. In addition, many people go on to lose their license, car and job.
**Donât drive distracted. It is dangerous and unlawful to read, write or send a text message while driving in Iowa.

CRASHED ON THE FOURTH OF JULY 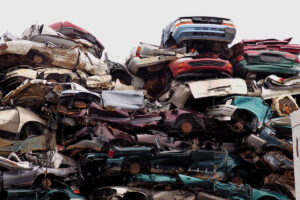 In the past five years, Iowa has only had one fatal car crash with âdriving less than the posted speed limitâ listed as the cause (2016-2020). Image by Gary Scott from Pixabay

Over the 1-day holiday period, Iowa experienced:
1 fatality and alcohol was involved

Over the four-day holiday period, Iowa experienced:
4 fatalities of which
1 involved alcohol 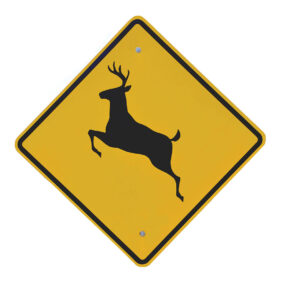 DEER IN THE HEADLIGHTS!