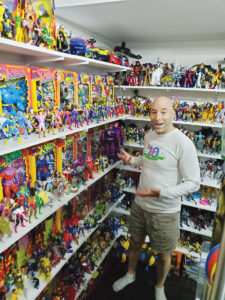 Eric Jaskolka amassed the largest
collection of X-Men memorabilia while living in West Des Moines. Moving such a large collection to his current Iowa City residence was quite an ordeal.

Remember the first time you witnessed âGuinness World Recordsâ? Recall the majesty of seeing a man standing nearly 9 feet tall? Or a woman not quite 3 feet high? Or the person who can juggle fire and eat Doritos with his feet while ordering drive-through cheese sticks and making his own milkshake in record time? (OK, we made up that last one.)

But have you ever wondered if anyone in Iowa has these types of talents?

Robert Wadlow holds the Guinness World Record for being the tallest man ever â 8 feet, 11.1 inches.

Ayanna Williams has the record for growing the longest female fingernails on a pair of hands ever â 18 feet, 10.9 inches.

A person named Super Farmacia Rebeca performed the most mammograms in a 24-hour period â 352.

None of the aforementioned are from Iowa, but keep reading to be even more amazed by the incredible accomplishments by Hawkeye staters. Enjoy.

THE WIDEST TONGUE ON EARTH BELONGS TO EAST HIGH ALUM 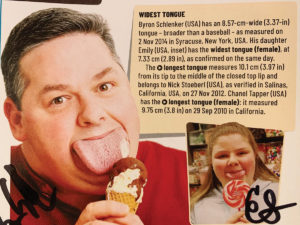 Where: Grew up living on Des Moinesâ east side; now lives in New York state

The âHuman Bodyâ section within âThe Guinness Book of World Recordsâ is the most popular section, according to Byron Schlenker, and thatâs something the East High alum, who now lives in Syracuse, New York, knows something about.

Schlenker never considered his tongue to be extraordinary, but when his daughter brought home a Guinness World Records book and he saw what the record was previously for the worldâs widest tongue, he thought, âHmmm.â The next thing he knew, his daughter was wrestling a measuring tape into his mouth and, lo and behold!… It appeared Schlenkerâs tongue could be the widest one known to man. He wrote to Guinness, but their response was disappointing. They outlined a verification process that would cost $5,000 or maybe more.

But a year later, Guinness reached out with a simplified process, and the rest is history. Schlenker holds the record for having the Worldâs Widest Tongue at 8.3 centimeters or 3.37 inches.

Ever since the book was published with Schlenker in it, he has been routinely contacted by an assortment of media and random strangers from around the globe.

He limits who he interacts with.

âThe thing about Guinness is that they are a class act,â he says. âNo matter how weird it can be, they make it seem like itâs the neatest thing in the world. They donât make you feel bad or weird or exploit you in any way you arenât comfortable with.â

Large tongues must run in the family genes because Schlenkerâs daughter Emily has recorded the widest female tongue on record, measuring 2.89 inches wide.

âOne thing we often tell people when they ask to see our tongues is, âAre you sure?â â says Schlenker. âBecause you canât unsee it!â

The madness began back in 1989 when Eric Jaskolkaâs Sunday school teacher â who coincidentally owned a comic book shop â introduced the lad to comics. The youngster eventually expanded his collection to include any type of X-Men memorabilia, and then, while living as an adult in West Des Moines, Jaskolka set Guinnessâ world record for having âThe largest collection of X-Men memorabiliaâ on record.

Jaskolka has since moved to Iowa City, and moving his large inventory was laborious, but that hasnât stopped him from expanding it. The gigantic collection numbered 15,400 items in 2012 when he officially earned his mark.

In case you are wondering, Jaskolkaâs favorite X-Men character is Wolverine. 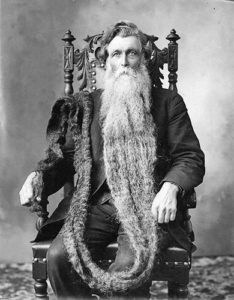 Hans Langseth is pictured here at age 66 with his beard draped over his shoulder and down to his hand. Langsethâs recordsetting beard measures more than 17 feet. It is preserved in the Smithsonian at Washington, D.C.. Photo courtesy of
Wikimedia Commons, Jorgenson, Nils C.; NDSU archives

As a young man, Hans Langseth let his beard grow out in an attempt to win a contest. After the competition was over, the Norwegian-born man continued letting his whiskers get longer until eventually he had what would later be recognized as the longest beard in recorded history, measuring 17 feet and 6 inches long.

Langseth mustâve been proud of his beard. When he died in 1927 â he was buried in Elk Creek Church Cemetery in Kensett â he wanted his beard to be cut off and saved for posterity. A dutiful son did as his father wanted, and Langsethâs facial hair eventually found its way into the Smithsonian and âThe Guinness Book of World Records.â 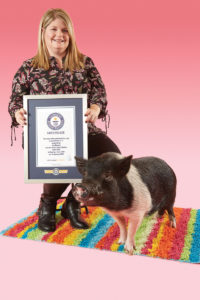 Dawn Bleekerâs miniature pig named Joy set a Guinness World Record for doing the
most tricks by a pig in one minute.

Pet tricks arenât just for dogs and cats, according to Dawn Bleeker, who, along with her 75-pound miniature pig named Joy, set the record for âThe most tricks performed by a pig in one minuteâ by performing 13 such performances.

The dynamic human/pig duo lives in Newton where Dawn runs a movie theater. This is also the primary venue for Joy to perform at, and the pig has become a bit of a local celeb. 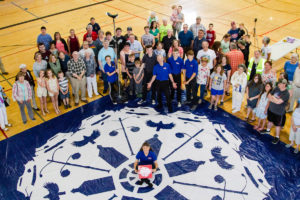 âHers was, by far, the hardest and the most dangerous,â boasts Mark proudly. âThat one might never be broken.â

Taylor Maurer chose to accept the sticky-note face challenge and nailed it. By attaching 60 notes to her face, an average of one per second, according to Guinness, Maurer made her dream of owning a Guinness World Record a reality. To count toward the record, each sticky note must be attached one at a time to the faceâs skin, and once the allotted 60 seconds is over, each note must continue sticking to the participantâs face for at least an additional 10 seconds.

According to the Guinness Book of World Records, Lori La Deane Adams tossed a 2-pound rolling pin 175 feet, 5 inches at Iowa State Fair, which is the âFarthest distance to throw a rolling pinâ in recorded history, according to Guinness.

PELLA THINKS IT CAN DANCE… IN WOODEN SHOES

The largest clog dance in recorded history happened when 2,605 participants cut a rug at an event organized by the Pella Historical Society for part of the groupâs Tulip Time festival.

The first game of college basketball (five on five) was between University of Iowa and University of Chicago at Iowa City Armory. Before this game, contests were generally played with between seven and nine players. The final score? Chicago 15, Iowa 12.

THE MOST STRAWS CRACK WHIPPED FROM THE MOUTH IN ONE MINUTE: 55