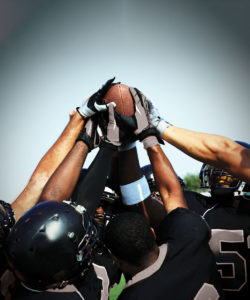 Which Iowa high school sports powerhouse can lay claim to being called the most dominant dynasty of all time? What is the most feared program in Hawkeye-state history? Which team was the best, flat-out, of any sport when measured against every generation?

Objective stats have a way of taking on subjective value, and, even after seemingly endless research and an untold number of heated
conversations, try as we might, CITYVIEW canât definitively end this argument. This age-old riddle may not be solvable to everyoneâs satisfaction, but it sure is fun sifting through some of the evidence.

Sustaining the type of dominance that is needed to earn the distinction of being called a âdynastyâ doesnât happen easily. A dynasty means
more than a single championship, and it definitely means more than having one good year or three or even five. A dynasty implies ongoing excellence that endures and outlasts one great player or a single superb season.

Dynasties rule their community and create an atmosphere where newborns in a given area have moms, dads or uncles who look at each baby and daydream of how that new little life might somehow contribute to said dynasty. But there is no objective measure for this.

Instead of pretending to prove there is an unquestioned top dog, CITYVIEW prefers to humbly submit a few potential contenders â mostly from the fall and winter sports seasons, since those are approaching. We freely admit to giving some preference to the powerhouse
programs most relevant to our central Iowa readership. Feel free to be offended by these choices if that sort of thing is fun for you, but no
harm is intended. This one is just for fun. Without further delay, letâs dig into a handful of dominating and historic Iowa high school sports dynasties. 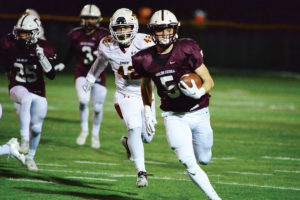 Just under 18,000 athletes participate in Iowa high school football, more than in any other IHSAA sport. Photo by Drue Wolfe

The football team for Dowling Catholic High School (DCHS) hasnât missed the playoffs since the Bush administration (2007), and the Maroons squads have earned 10 Class 4-A state championships in the last 20 years, including the last seven. You read that right…seven… straight… and still counting.

The first-place trophies began under Matt Dillon. The former head coach (1996-2005) has moved on, but his teams started the ball rolling with back-to-back titles in 2000 and 2001. The team won again in 2010 â this time with current Head Coach Tom Wilson leading the charge. He took the helm in 2005. In 2013, Wilsonâs program began its current reign of terror. Now Dowling Football has its sights set on eight straight, but you wonât hear much about it from Wilson.

âHonestly, itâs not something we talk about,â he says. âWe have a lot of work to do to even make that a realistic possibility.â

The 2020 Maroons will field new starters at all five offensive line positions as well as at quarterback, and the teamâs two leading rushers and tacklers from 2019 have also moved on, according to the coach.

Dowling has earned the most postseason appearances of any Iowa high school since 1972, making the playoffs 42 times and compiling a
postseason record of 82-32.

The program has gone undefeated twice during its seven-season run â in both 2013 and 2015 â while compiling an 87-6 overall record and posting 30 straight playoff victories. Only Iowa City Regina has won more consecutive postseason games with 33 straight (2010-2016) while winning six straight championships (2010-2015). If Dowling makes another postseason run in 2020, it could break Reginaâs record.

Ryan Boyle, Dowlingâs star quarterback at the beginning of its current state title streak, won the Iowa Gatorade State Player of the Year in 2013 and 2014. Since the awardâs inception in 1985, no other player has won the award back to back. Another Maroons quarterback, Connor Bravard, won the award in 2010. 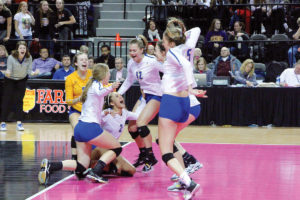 The volleyball program at Dubuque Wahlert has won 20 state titles, including a three-peat, a six-peat and another three-peat. The 2017 state champions are pictured here. Photo by Sandra Gaul

Dubuque Wahlert Volleyball has earned 20 state championships, the most out of any volleyball program in Iowa. Wahlertâs teams of the early 1990s ripped through the competition, three-peating through the years of 1990, 1991 and 1992. Then Wahlert ripped six straight titles, spanning the 2000-2005 seasons, and, more recently, the program won another three straight, winning titles in 2016, 2017 and 2018. Thus the programâs resume includes a three-peat, a six-peat, another three-peat and 20 titles overall. Wow.

NOTE: Wahlert will be led by Paige Griffith in 2020. The new head coach takes over for Lindsey Beaves, who stepped aside after seven seasons. 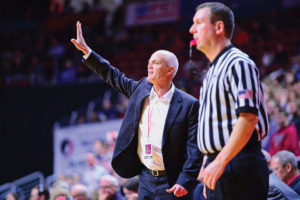 Ankeny Womenâs Basketball Coach Scott DeJong at the 2019 State Tournament with Centennial. DeJong led the Hawkettes to six state titles, including a record four consecutive crowns in 2002-2005. DeJong moved to Ankeny Centennial in 2013, and he guided the Jaguars to their first state title in 2016. Photo by Drue Wolfe

The 2008-2009 and 2009-2010 Ames High basketball teams boasted a roster that was loaded with a pair of future NBA first-round draft picks. Harrison Barnes was drafted seventh overall in the NBAâs 2012 draft; Doug McDermott was the 11th pick overall in 2014. That kind of talent is not often seen in a state with only 3 million people. Thus it comes as no surprise that the team regularly demolished opponents and went undefeated for two straight seasons on their way to back-to-back state championships.

FACT: Ames won each playoff game during its twin-title run by 10 points or more. 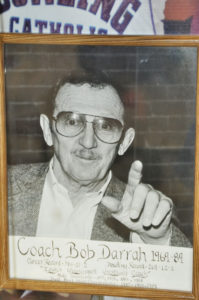 Wrestling coach Bob Darrah compiled an astounding 296-12-1 dual meet record during his two-decade run at Dowling. This picture of the legendary leader hangs in one of the schoolâs trophy cases. Photo by Jeff Pitts

Dowling footballâs detractors donât have to look far for ammunition to argue against the program being the best in Iowa high school history. Thatâs because it might not even be the most dominant program in Dowlingâs own history.

The schoolâs wrestling squads of the 1970s, 1980s and early 1990s can conceivably lay claim to that distinction. From 1987-1992, Dowling grapplers won six consecutive state dual team titles, that is the most of any team in state high school wrestling history â tied with Don Bosco Catholic High School in Gilbertville (2005-2010). Six straight is surely impressive, but get this: Iowa didnât add a state team dual tournament until 1987, and DCHSâs wrestling dominance substantially predated that inception. Dowling won the first six team dual championships, and if these competitions had begun sooner, it is more than likely that the Maroons would have extended that streak by who knows how many.

FACT: Dowlingâs historic winning streak is 44 dual meets longer than the next longest streak of 92, which arguably makes it the most unbreakable record in Iowa high school sports history. In Darrahâs 20 years as Dowlingâs head coach, the legend posted a dual meet record of 269-12-1. His overall Iowa high school coaching record was an amazing 340-17-2. Darrah passed away in November of 2018. 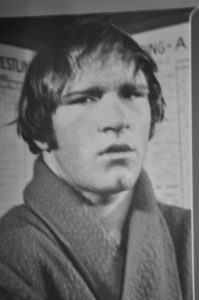 When Superman goes into a phonebooth, he comes out dressed as Dan Gable. Gable lost zero matches during his Iowa high school wrestling career. His exploits are on display at the Iowa Hall of Pride. Photo by Jeff Pitts

Waterloo West Wrestling: Bob Siddenâs dual meet record at Waterloo West was 327-26-3 (1950-1977). Plus, Dan Gable wrestled for this program, and when Superman is on your list of alumni, you deserve to be on any list. 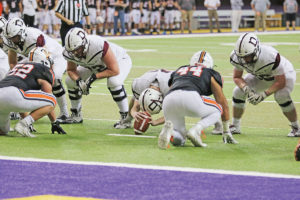 Get your popcorn ready. Valley vs. Dowling gridiron action resumes on Friday, Sept. 4 at Valley Stadium. The kickoff is at 7 p.m. Photo by Tony Topping

FACT: Dowling may own the longest current string of consecutive state titles, but West Des Moines Valley has qualified for the playoffs for 28 straight consecutive seasons, the most in Iowa history (1992-2019). In the past two decades, Valley has won five state titles, and ordinarily that would be good enough to launch it into the argument as being one of the most dominant stretches in state history, but since Dowling has doubled that total within the same span… checkmate.

The two storied rivals annually tangle in an early regular season matchup. The hype leading into each contest is enormous, and Dowlingâs Coach Wilson admits that he and everyone else want to win, but he also warns that the game isnât do or die. Valley and Dowling frequently end up facing one another in the playoffs â as they did last season in the state championship â and winning in the postseason is ultimately what matters.

The Valley vs. Dowling football rivalry can be heated, especially among passionate fan bases, but Wilson insists there is more to it.

âSometimes people lose sight of the amount of respect there is between the coaching staff and the two programs,â he says. âThere is a lot of mutual respect.â

The saga that is Valley vs. Dowling resumes on Friday, Sept. 4 at Valley Stadium. The kickoff is at 7 p.m.

Get your popcorn ready. ♦