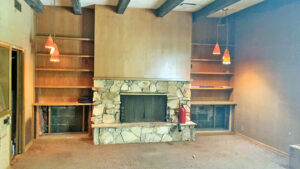 What was Bob Fridleyâs personal screening room at the Varsity is now the 30-seat second auditorium at the Varsity Cinema. Photo courtesy of Mark Heggen, director of âLost Cinemas of Greater Des Moines.â

The first story I wrote for this column back in 2017 was on the love story that followed Des Moinesâ Varsity Theatre. Bev Mahon fell in love with his future wife after reading about her in Box Office Magazine while he was enlisted in the Air Force. Patty Crouse worked in the Des Moines film depot where exhibitors would pick up their film prints and marketing materials. Locally, it was called Film Row and was located between 10th and 15th on High Street. Bev would return home from his time in the service and went down to Film Row and asked her out on a date. The rest is history. The story was written shortly after the announcement that the long-running art house theatre was going to be closing its doors for good. Thinking back to that time, most of us knew the Varsity Theatre was not going to be gone forever.

Looking back 40 or 50 years ago (or more), Des Moines was filled with movie theaters in seemingly every neighborhood. The Forest, The Galaxy, The Forum, etc. They were littered around the metro. Most were single- or twin-screen operations that played newsreels and cartoons alongside whatever Hollywood picture was currently running. Some would even hold big movies for months because there was no home video or cable options to see them. If they werenât at a local theater, there would be no way to watch. You MIGHT be able to rent 16mm prints and a projector from the local library, but that was an ordeal, as you might imagine. 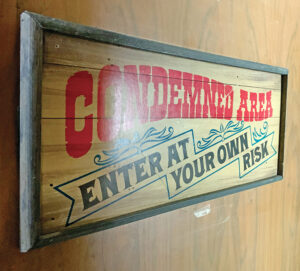 The Varsity Theatre stood out because it played foreign and art house films that most of these movie houses didnât. Bev Mahon and his original partner, Bob Fridley, owned several theaters together, but this one was special. After Bev and Bob ended their partnership, Mahon retained the Varsity to show the films he loved. Even after all the small theaters eventually closed, The Varsity stood the test of time.

Now, in 2023, the new Varsity Cinema is up and running. I had the opportunity to catch my first film there in January. âSkinamarink,â a new art-house horror film that shows no characters on screen and all dialog was delivered in whispers. Not for you? I totally understand. I donât think itâs for anyone, honestly. It was not screening in the large auditorium that I had previously watched many movies in. It was instead in the new 30-seat second screening room on the second floor. It was the perfect place to see such an existential movie. The place was nearly sold out. Exhibitors take big risks booking movies like this. No one really knows anything about them except from word of mouth, which is all I knew. I heard it was going to be strange and different, and it was. It was also one of the most intimate screenings I had ever been to. Not intimate as if the crowd was making out with each other at an âEyes Wide Shutâ party, but still intimate. All the seats were filled up, and none of us knew what we were in for.

I have had my doubts about the film-goer scene in the past. Do we have a community that wants to see films like âSkinamarinkâ or something made by a resident artist? Maybe not, but we do have enough to fill a 30-seat screening room, and, from there, new appreciations will walk out of those doors. After the movie was done, my friends and I stood in the lobby on the main floor and talked about what we just saw. I hadnât done that outside of my film festival adventures like SXSW, Fantasia, or even AFI. We each had our theories of what that whole mess was about. It starts with just a few people, and it gradually gets bigger. I kept thinking that what we were doing was what Bev Mahon wanted all along. He wanted audiences to engage in art-house cinema. This was his mission. My only suggestion is that the Varsity may want to expand the lobby in the next few years because more and more people will want to gather after a film to discuss what the hell they just saw. Nice work. ♦