A romanticized view of raised-by-Grandma turkeys 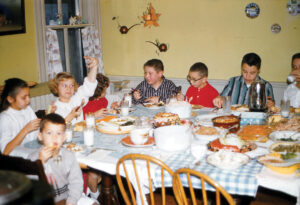 Iâm busy. I know a lot of folks from generations before me donât understand this. Take your normal seven or eight hours in a workday and turn those into 12 to 14 hours per day. Now remove your Friday nights because you are exhausted. Your weekends are now your âget aheadâ days to prepare for Monday. When holidays roll around, the only thing I can think about is âno one will be calling or texting me so I can get a lot of work done and get ahead.â Itâs unhealthy. Iâll be the first one to admit that. So, all this excessively sentimental talk must mean we are leading into the holiday season with the first of the mandatory âall immediate family requiredâ get-togethers known as Thanksgiving.

Itâs an amazing holiday to me. I can remember my family getting together playing football in the backyard if it was warm enough, or just sitting in front of the TV or hanging out in the kitchen. My anxiety today doesnât allow me to relate. Now I think back to those days and wonder how many things I could have accomplished during those hours of being still. I also wonder what the folks who were attending the football games were doing for Thanksgiving. Was that it?

My fearless leader at CITYVIEW asked me to tackle the simple question, âWas there a place in Des Moines where people bought Thanksgiving turkeys prior to the grocery stores?â Although I couldnât find a whole lot of straight answers in Des Moines specifically, I did get some stories from my trusted circle of correspondents who are all 50 or older.

More than 270 million turkeys are killed each year, but they were not immediately available in grocery stores prior to the 1920s. Ruth Schrader moved to Des Moines in the early 1960s. She didnât travel that far from her hometown of Eldora. She started her family but wanted to hold on to the tradition of getting the Thanksgiving turkey directly from the source: the family farm. It wasnât as sweet as nostalgic fantasizers like Clark Griswold would think.

âCity people have a romanticized view of serving one of the raised-by-Grandma turkeys from the farm,â says Schrader. âTurkeys were mean and terrorize little kids. It was a nasty mess to kill and dress them, and they were stringy and as tough as leather. They had to be basted, covered with butter or bacon, and cooked long and slow in order to be edible. And youâd better like dark meat because there was much less white meat on turkeys back then. My mother was thrilled when she could go to the store and pick up a Butterball.â

Schrader went on to tell me that everyone would pile in the family car a few days before Thanksgiving, and they would drive more than an hour north. They would see free range turkeys bobbing their heads around and pecking away at the feed that had been spread on the grounds. When she was a kid, her mother, who was âa feisty red head with a mouth of a sailor,â would take the lead. She would examine all of the turkeys, and she had an eye like no one else.

âMy dad grew up on a farm and worked as a hand, but he really didnât have an eye for catching the right bird,â Schrader said. âHe was more about convenience and wouldâve grabbed whichever one was easiest to catch. Mom knew what she was looking for. She was quick about it, too. She wanted it to be as humane as it could be for what it was: cutting the head off. It wasnât shocking for us who grew up in the country, but it wasnât fun either. It was always a mess, and no one wanted to do it. We would clean it all there and get it ready to be cooked, put it on ice in a Styrofoam cooler, and then drive another hour.â

Schrader also told me they sometimes would go out the day before Thanksgiving, kill and clean a turkey and have it in the oven that same night so it would be ready by noon the next day.

OK, playing football in the backyard or hanging out in the kitchen around the Butterball for the âall immediate family requiredâ get-together known as Thanksgiving suddenly sounds pretty good.